Nintendo might be setting up its investors with a nice gift before the launch of the Switch console: Mobile money from what so far appears to be an expert adaptation of one of its flagship franchises.

Fire Emblem: Heroes launches February 2 on iOS and Android smartphones and tablets. It’s a significant step for Nintendo, which has been reluctant to dip into mobile gaming and embrace the free-to-play business model — it’s pairing the “gacha” mechanic with one of its most important series. Intelligent Systems, the longtime studio for the franchise, led development with input from Nintendo and DeNA, the mobile gaming company that made the backend for the Japanese console publisher. I played just three missions and fiddled with a bit more, but from what Nintendo showed, it’s adapted Fire Emblem in such a way that lifelong fans will enjoy it, and newbies just might bite at the hook as well.

The game takes the accessibility Nintendo has long showcased with the Mario series and puts it into its most complicated franchise. And it works.

The land of Zenith

Fire Emblem’s mobile debut takes place in the land of Zenith, a new setting for the franchise. Here, we find two factions, the Askr Kingdom and the Emblian Empire, and one aspect of their war is a bit unconventional: They use Orbs to summon heroes from Fire Emblem’s other worlds to battle.

A mysterious stranger also shows up from time to time as your Askr Kingdom’s leaders plunge into the story with Prince Alfonse, Princess Sharena, and others you meet along the way. You earn these Orbs from winning each scenario; you can also buy them.

You’ll “Orb” in a number of characters from a bunch of Fire Emblem games — one of the ones that stuck in my memory was Gunter from the well-reviewed Fates last year — and they’ll serve as units in your army. 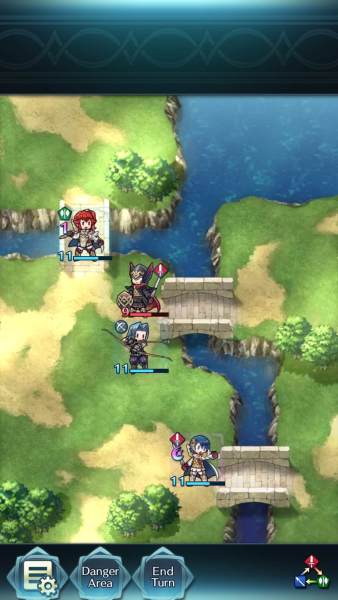 Above: This guy’s toast.

I play a lot of strategy role-playing games for PC, and when it comes to the interactions between weapons and abilities, I like them as crunchy as can be. So I’m at a loss to explain how Fire Emblem’s simple rock-scissors-paper weapon triangle has always thrown me off — and why I struggle more with this franchise than even the most opaque games from Eastern Europe.

Fire Emblem: Heroes makes sense to me. Part of it is how the weapon triangle — red sword over green axe over blue lance — sits in the bottom right-hand corner of the map in combat. Each unit shows the appropriate icon as well, so if you get confused or forgot or just need a hand, the weapon triangle is there to help.

As long as you remember that gray icons, like ranged and healers, aren’t part of it.

But in the first map, that wasn’t much of a consideration. I went against a force of melee fights. I had one unit with a sword, another with an axe, one with a lance, and an archer. No healers or other magic. My foes were three units, one with a sword, another with an axe, and the final one with a lance. Now, it’s no surprise that the first mission had just a few soldiers to fight, but one of the concessions that I’m seeing for mobile is how the battles are smaller and quicker than on the consoles.

It didn’t take long to dispense with these foes. You can tap on your units to move them, and when it’s time to engage the enemy, you can either tap on your soldier and then on your target, or you can slide your finger from one to the other. The touchscreen option feels more natural to me than tapping, given the platform.

Fire Emblem: Heroes does have a player-versus-player component, but it’s indirect. I wouldn’t be taking on Billy 1-on-1 whenever we arranged for a match. The A.I. would control Billy’s forces in these maps. But PvP isn’t so much about beating your friends but instead seeing how high you can build your score in a given season.

Nintendo didn’t say how long a season would be — a couple weeks, a month, or so on — but your goal is to earn the highest score that you can during that period of time, and you can play as many times as you wish — your best score doesn’t get worst just because you play and have a poor run after an exceptional one. At the end of the month, you’re grouped into rankings. Your score is based on whether you won and whether you’re using a featured hero (you get a bonus with one). You use Dueling Swords (you get three per day) to play this take on PvP.

Sadly, it does not appear that your friend gets any bonuses for having their units take part in this PvP. 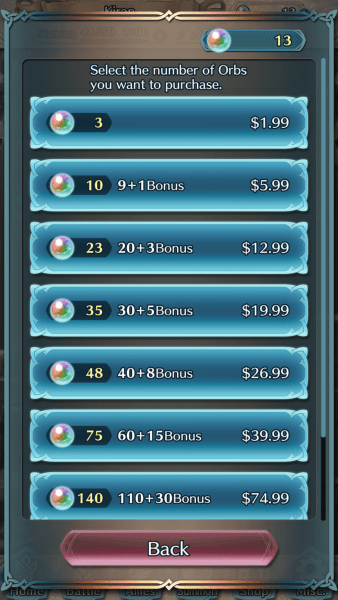 Above: The pricing breakdown for Orbs in Fire Emblem: Heroes.

Nintendo showed off how the free-to-play aspects for Fire Emblem: Heroes works. You can pay for Orbs, which you use to summon heroes, and you can pay for other currencies as well. And this mobile take on the strategy franchise doesn’t feature perma-death, so you don’t have to worry about losing a warrior that you spend Orbs on gaining.

You gain one Orb for clearing each map. I took out three in about 45 minutes (though I did spend a great deal of time talking, viewing other screens between battles, and asking questions). And, of course, Nintendo loaded the account I was playing on with a hoard of Orbs, enabling me to test out the purchases.

To summon a hero, it costs five Orbs. So for every time you want to summon a hero, you’ll need to win five battles. You can either get a 3-star, 4-star, 5-star, or special 5-star hero. The rates for the top drops are 3 percent. The 4-star is 36 percent, and the rest are 3-star drops. But Orb rates go down on consecutive purchases. The second hero purchase is four Orbs, as is the third and fourth. And the first is three Orbs. You can purchase three Orbs for $2.

Nintendo is also selling other items. You can outfit your castle to provide boosts to the experience you earn. You can also purchase Shards and Crystals to level up your troops (or you can do it the old-fashioned way in combat). You can also level up your Heroes, moving them from 3-stars to 4-stars and even 5-stars while retaining their abilities. They start each new star tier at Level 1, though.

You can also earn heroes by playing special maps. In these battles, if you defeat the main foe, you will get them at one star lower than their encounter strength. We came across Lissa from Fire Emblem: Awakening, who was a 2-star hero. If we defeated her, I would’ve received her as a 1-star hero.

Combined with Orbs and units that join you in certain story missions, this gives you three different ways to earn heroes — two of which don’t involved monetization at all.

Will the monetization be a wall?

Playing three maps over an hour, I didn’t have enough time to determine if players would get frustrated by a paywall. Lots of strategy games have ways to restrict the amount of time you can play before paying up, but few of those games (in my experience) come from franchises in which you’re used to playing without any sort of limits on your time.

Fire Emblem is different — it’s joined Mario and The Legend of Zelda as a Nintendo’s flagship franchise, selling millions and fostering a passionate base of fans. At the same time, Nintendo — and market watchers and investors — are looking at a new source of revenue (and players) … and maybe a new pipeline to converting people to the upcoming Switch console.

It’s going to be fascinating to see if Fire Emblem: Heroes catches on — and if it can carve into the profits made by strategy-gaming stalwarts such as Clash of Clans and Mobile Strike.