Advertising mobile apps faces a lot of friction. You have to advertise it, get someone to tap on the ad, download the app, and then start to actually use it. A lot of people drop out before they ever finish that process. But that’s just one of the problems that 1App is addressing with its cloud-based version of Android.

The Menlo Park, California-based startup has taken the disruptive cloud-streaming technology and applied it to the problem of app discovery. Now you can use 1App’s OneOS to instantly deliver a mobile app to someone who wants to try it out.

Raheel Hasan, CEO of 1App, said in an interview with VentureBeat that 1App can stream a full app experience to any device in any mobile environment. You could play an Android game on an iPhone if you wanted to, with no waiting and now need to bother with stores or downloads. 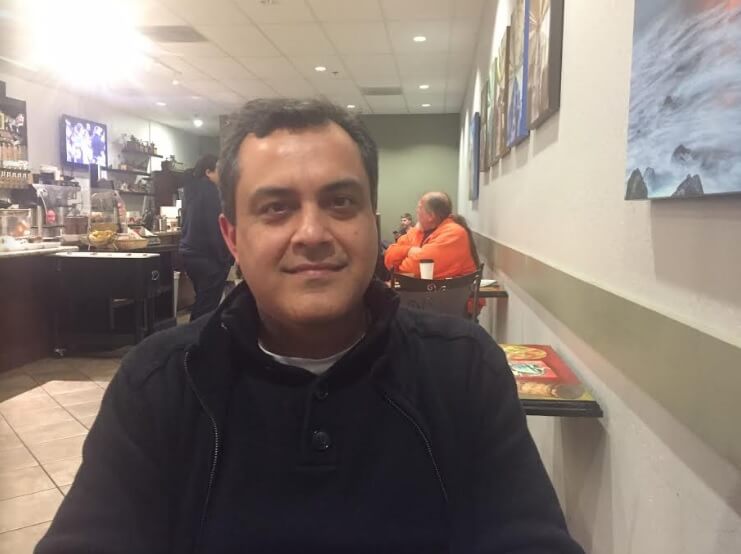 Above: Raheel Hasan, CEO of 1App

“It reduces friction and gets people to use your app,” Hasan said.

The company’s technology came from an unlikely place. The key members of the team came from Synopsys, a chip verification software company. Synopsys simulates a chip’s behavior in software so that its design can be tested through simulation before a chip is ever fabricated.

“We had tremendous expertise to optimize software in the cloud,” Hasan said. “Our expertise over many years was to match the simulation to the chips, optimize the threads. We applied that expertise in optimizing code to mobile.”

The first category that 1App chose to target was games. For games, there are a million competitors in the app store, and it’s hard to get noticed.

“If we could get that experience right, streaming a game to a phone, then we knew it would be OK for other apps,” Hasan said. “We also picked retail. If you are a retail giant (say, Target), your chances of getting an app installed are very low. But the app experience could be very good with us. You can go into a store, tap on a link that you receive on the phone, and then use that app immediately.” 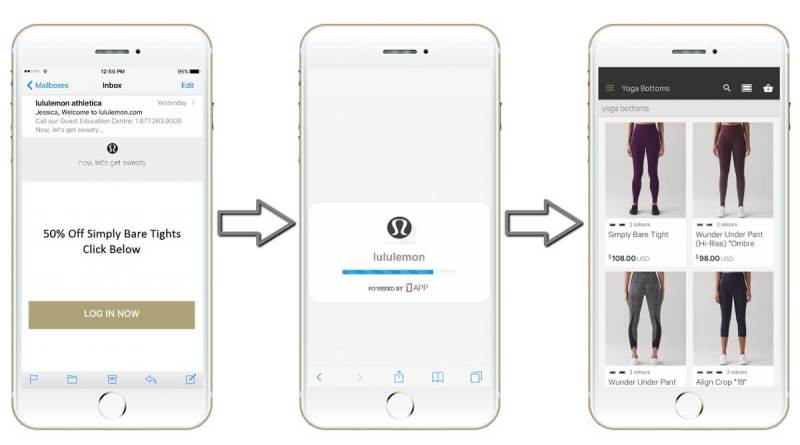 1App used its expertise to create OneOS, a proprietary mobile operating system that was built from the ground up to enable mobile apps in the cloud. OneOS is multi-tenanted. That means multiple customers can access the same app experience at once. The core technology is based on Android source code, and it enables Android to run natively on server hardware.

For developers, this means they don’t have to make any changes to their original mobile app, allowing them to forgo updates that customers have to install. They don’t have to change any lines of code in an app in order to make some major changes. All they do is update the software running in the server.

“By making apps instantly available, in the short-term 1App dramatically improves discovery and growth for any mobile app developer,” said Chethan Ramachandran, former Unity executive and founder of predictive analytics shop Playnomics, in an email. “Longer-term, the company has the potential to change how and where apps are used and distributed, which would open up the economics of the entire mobile ecosystem beyond the current app store duopoly.”

The app essentially becomes device and platform agnostic. Features like payments, notifications, and the social graph can be swapped out and changed on the fly, in the cloud, to any preferred provider. With OneOS, apps can be delivered instantly to any capable web connected device including iOS, Android, and Windows devices, Hasan said.

With this technology, the consumer experience drastically changes. When a friend recommends an app to you, they might share a link to the app in a store. You have to tap on it, download it, and then see what it is. With 1App InstantShare, a user could share a social invitation and the recipient could tap on it and instantly see the app running on his or her device. The user could interact with it and play the game or app as if they had actually downloaded it. It wouldn’t just be a demo. It’s the full app. 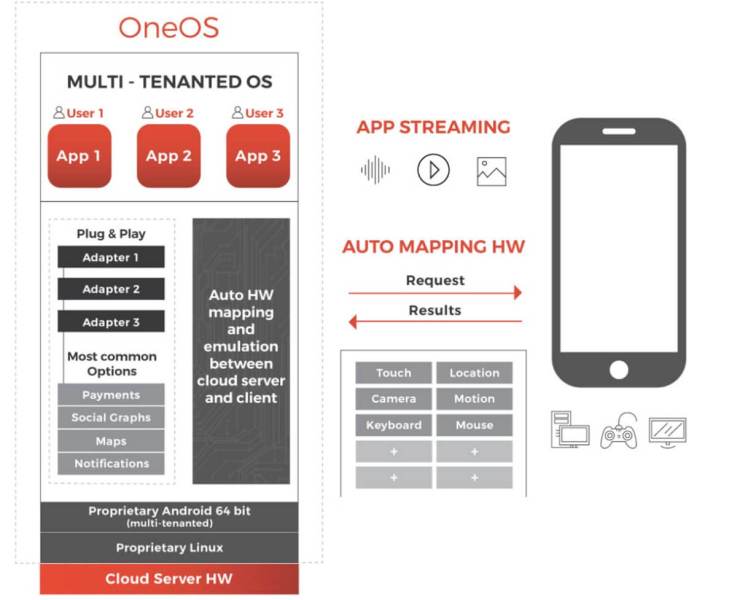 Above: How 1App works in the cloud to stream apps

The concept is a lot like deep linking. Say you have Spotify and want to share a song with someone. If you do, you don’t have to worry if they don’t have the app. You share a link, they tap on it, and it plays instantly.

For growth marketers, 1App has created InstantClick, which provides clickable web links that can be dropped into any consumer-facing marketing channel. InstantClick can be used in existing channels to provide a full app experience to have users complete a transaction or install an app.

“The idea is to let the app start chasing people, and go where they are,” Hasan said. “If Stephen Curry has a shoe, he can share a link to the shoe on his social channels. His fans could tap on that link and go directly to buy the shoe in a store.”

All the marketer does is drop an app into OneOS and get a universal web link that can be instantly used in any marketing campaigns. InstantClick enables users to engage 100 percent of the app without the need to visit the app store or download it. This is getting a user at the price of a click (CPC) versus a price of install (CPM), which may be up to 10 times higher.

1App at first got paid a percentage of the revenue, but it’s a lot less than what the app stores take: 30 percent of revenue. And Hasan said the company is moving to a pure software-as-a-service model, where customers pay for usage of the cloud for streaming. The tech runs on public clouds.

Of course, Apple could get mad at 1App. But it can’t retaliate and do something like shut down 1App’s app. That’s because there is no 1App app. 1App’s sharing links could be distributed on the mobile web on a smartphone’s browser, or through social channels, or text messages. And Apple can’t stop that.

Hasan said it took a lot of work to build since founding the company four years ago. They built a full-fledged mobile OS in the cloud, ready to scale out and serve lots of users.

“Our motivation was to improve the app experience on any device,” he said. “We saw most of the apps were going to get left behind, unless there was an easy way to get to the app.”

He added, “If we do this right, we can be the company that most apps run on.”

1App can also get do things that aren’t otherwise possible. It can get an Android game running on iOS, or get an app running on a smart TV or a PC. Of course, these devices have different control mechanisms. But Hasan said his team took 10,000 apps, about 500 from each category. About 84 percent of them ran instantly on OneOS. Some took a little bit of development tweaking.

One of the game companies using 1App is Glu Mobile.

Hasan is optimistic about the impact this could make on app usage.

“Any time you take any form of media and make it instantly available, whether YouTube videos or Netflix movies, you see an incredible increase in the users of that media,” Hasan said. “You take the friction out. We could explode the usage of apps.”