I’ve been popping pustules since puberty. I can’t resist. The twinge of pain, the little “pop” I can hear as the swelled pocket of pus bursts. Watching the white fluid squirt from the wound as I watch my work in the mirror — it’s an unhealthy obsession, one that I can’t help myself from doing.

Turns out Torment: Tides of Numenera taunted — and enabled — me with my obsession.

The role-playing game from the crowdfunding maestros at Inxile Entertainment (Wasteland 2) comes out February 28 (Techland is the publisher) for PlayStation 4, Xbox One, and PC. It raised nearly $4.2 million on Kickstarter in 2012, making it the second-highest game campaign in the platform’s history. It cites one of the greatest RPGs in history for its inspiration — Planescape: Torment, a 1999 classic that sits in Dungeons & Dragon‘s discontinued Planescape setting to tell a story that focused on your character’s journey, not combat. After playing 90 minutes of Torment’s midgame — along with off-and-on tinkering with its opening chapter in a beta build — I found that Tides does indeed capitalize on the sometimes gross, often challenging world of the Planescape game.

And it enabled me to take part in my dark pimple-popping obsession.

It didn’t take me long to find what might have been the grossest part of the demo. I was exploring the inside The Bloom, a city that’s inside a massive amoeba-like beast. Each area looks like you’re tramping around the guts of a great monster, and several times, I had to deal with the mouths and tentacles that appear inside The Bloom. 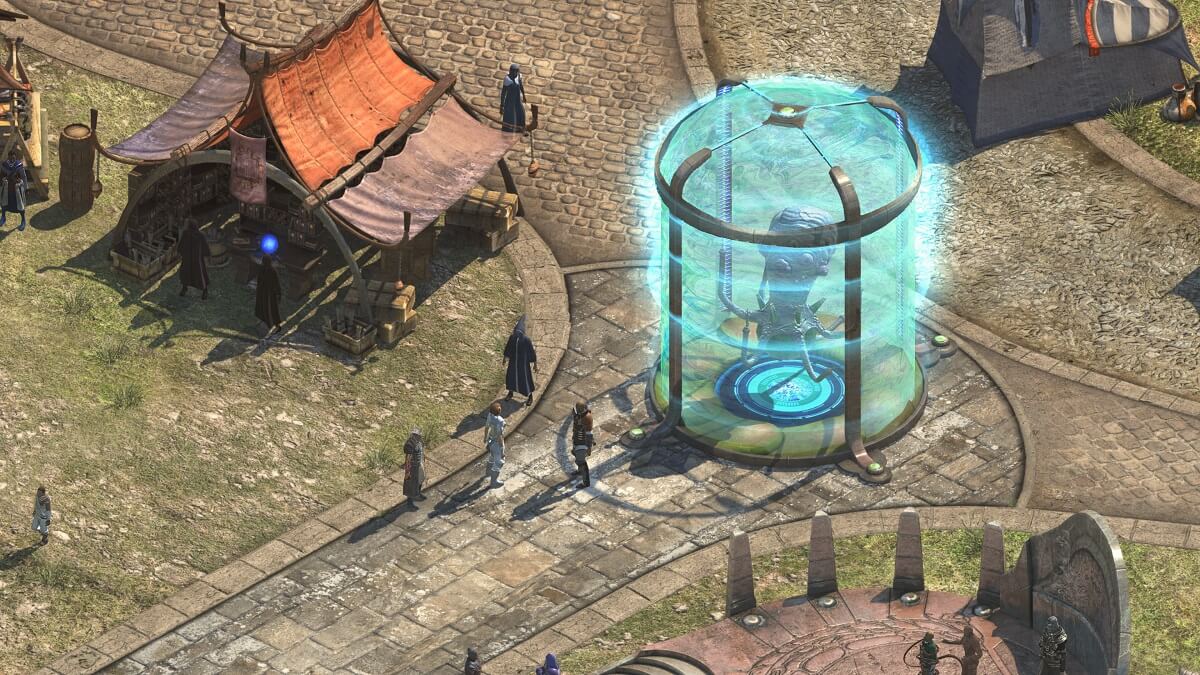 Above: I never made it to this brain jar. I want to pop it open, though.

The Bloom is a special creature, one that fits into the fiction of the original Torment. In Planescape, the City of Sigil is known for all its portals to other planes and dimensions. It was the setting for that game, and The Bloom replaces it as a sort of interdimensional hub. But instead of portals that are doors and other spaces, the rifts from one place to another form from the monster’s mouths — inside the beast. Walk through an open mouth and you may find yourself in a crystalline realm or a trade post on another world.

While Planescape and the Numenera campaign setting are two role-playing worlds held by different publishers and with their own rules, Inxile is finding many ways to link their spirits together. Replacing The City of Portals with The Belly of Gates. As Inxile’s George Ziets told me, this is part of how their design and story teams were capturing the spirit of Planescape: Torment.

And another thing that fits this spirit? The cyst I found.

As I was exploring The Bloom, I came across a lump. It took up more space than my adventuring party, and it was whitish with red splotches. After gazing on this boil, I just knew I had to touch it.

I took the Xbox One controller — Torment will hit both consoles and PC when it comes out later this month — and moved my character to the cyst. I interacted with it, and it asked me if I wanted to touch it. I did, and as a wave of pain washed over my character, he relived a memory — a painful one.

Turns out, I could only pop this cyst and learn its secret by delving into these memories … and experiencing the pain inside them. It’s another call-out to Planescape: Torment. The ruler of Sigil is The Lady of Pain, and experiencing pain is a theme common to the setting’s lore.

So I plunged into the pain. As I kept poking the cyst, I exposed a story (I’ll leave the details out so you can enjoy it for yourself, should you choose to play Torment when it debuts later this month). And finally, the pustule burst, and instead of a shower of puss, a being popped out.

And then it ran away, jumping down into the a chasm in the floor.

Part of me expected a bigger payoff — maybe some boon from the white being in the cyst, an item, or some cryptic bit of lore. Instead, I just stood there, with a popped pimple and some pain. But that fits Torment’s tone as well — a game where combat isn’t required (I had only one fight in nearly 90 minutes of playtime). It’s about exploring a world, and prodding at similar situations may open up side-quests, drops bits of lore … or even lead to bigger narrative payoffs.

Even if you have to pop a pimple or two to unleash its secrets.