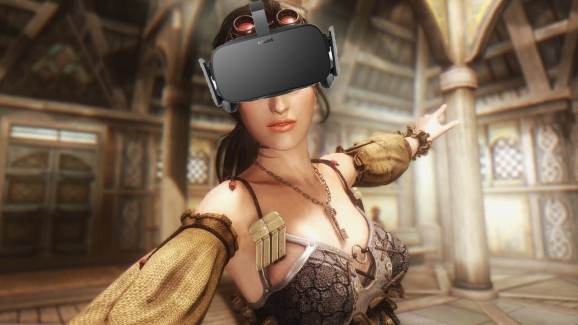 ZeniMax has a legal right to some of Oculus' success, according to jury.

The jury has come in on one of the first major lawsuits for the burgeoning virtual reality industry.

Facebook’s Oculus VR must pay $500 million to ZeniMax Media, but not because the former stole any proprietary information from ZeniMax (parent company of Fallout and Skyrim publisher Bethesda) to bring the Rift head-mounted VR display to consumers. Instead, the jury found that Oculus cofounder Palmer Luckey violated a nondisclosure agreement that he had with ZeniMax, and that violation serves as the basis for the half-a-billion dollar penalty.

We have reached out to Palmer Luckey for a statement, and we’ll update this post with any new information.

“The heart of this case was about whether Oculus stole ZeniMax’s trade secrets, and the jury found decisively in our favor. We’re obviously disappointed by a few other aspects of today’s verdict, but we are undeterred. Oculus products are built with Oculus technology. Our commitment to the long-term success of VR remains the same, and the entire team will continue the work they’ve done since day one – developing VR technology that will transform the way people interact and communicate. We look forward to filing our appeal and eventually putting this litigation behind us.”

And here’s what a ZeniMax spokesperson said in a statement:

“We are pleased that the jury in our case in the U.S. District Court in Dallas has awarded ZeniMax $500 million for Defendants’ unlawful infringement of our copyrights and trademarks, and for the violation of our non-disclosure agreement with Oculus pursuant to which we shared breakthrough VR technology that we had developed and that we exclusively own. In addition, the jury upheld our complaint regarding the theft by John Carmack of RAGE source code and thousands of electronic files on a USB storage device which contained ZeniMax VR technology. While we regret we had to litigate in order to vindicate our rights, it was necessary to take a stand against companies that engage in illegal activity in their desire to get control of new, valuable technology.”

“Technology is the foundation of our business, and we consider the theft of our intellectual property to be a serious matter,” he said. “We appreciate the jury’s finding against the defendants, and the award of half a billion dollars in damages for those serious violations.”

This is the culmination of a case that goes back to Facebook acquiring Oculus in 2014 for an estimated $2 billion. Not long after that huge shakeup, ZeniMax filed a lawsuit that claimed it owned many of the technologies that enable the Rift to function comfortably because it employed current Oculus chief technology officer and former id Software boss John Carmack while he was helping Luckey in the early days of the Rift’s development.

As Oculus points out in its statement, the jury did not buy into that claim. Instead, Luckey got Oculus in trouble by violating a contract.

Over the last three years, Oculus has maintained that the Rift is completely independent from any work Carmack did while at ZeniMax. Carmack himself claimed that the software that powers the headset uses “zero lines of code” that he wrote while in charge of id Software.

No work I have ever done has been patented. Zenimax owns the code that I wrote, but they don't own VR.

But the case shifted in August when ZeniMax amended its complaint to focus on Luckey’s nondisclosure agreement.

Here’s the crux of ZeniMax’s argument:

In the end, the jury agreed that Luckey did indeed violate that agreement even if Oculus didn’t misappropriate ZeniMax’s intellectual property. This implies that the jury thinks that Luckey and the Oculus team understood and discussed ZeniMax’s ideas and tech, but stopped short of applying that intellectual property in a way that is illegal outside of a nondisclosure agreement.