Nintendo is about to release its third mobile app, Fire Emblem: Heroes. So, what is Fire Emblem?

For a long time, most U.S. gamers didn’t even know that the series existed. The franchise focuses on strategy, playing like a complicated game of chess. Now, Nintendo has four Fire Emblem games in the works, including Heroes for mobile and a new entry for the Switch, Nintendo’s upcoming home console/portable hybrid that releases on March 3. Nintendo is still new to the mobile market, so it must have faith in a series to give it the smart device treatment.

With the franchise’s mobile debut, you may be new to this whole Fire Emblem thing. That’s we’ve put together this primer, explaining where Fire Emblem came from and why it’s important for Nintendo’s future. 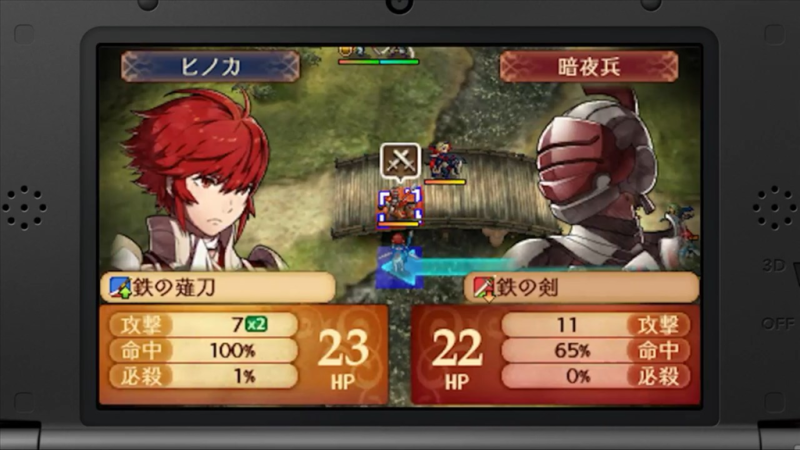 What is Fire Emblem?

Fire Emblem is a series of strategy games from Nintendo that debuted in 1990. Most games have either a medieval of feudal Japan setting, with combat based on weapons and magic. Turn-based fights take place on grid-based maps. On your turn, you can move all of your units and choose to attack any one in their range. Your opponent then does the same during their turn.

Combat has a paper-scissors-rock mechanic that determines which attacks are strongest. For example, swords beat axes, axes top lances, and lances take out swords. Much of the strategy in Fire Emblem is about dealing with this triangle, exploiting certain enemies while keeping vulnerable units out of harm’s way.

And you do want to keep your army safe. Fire Emblem is famous for its use of a permanent death mechanic (“perma-death”), meaning that any soldier that dies during a battle is gone forever. Recent games have eased up on this feature by giving you the option to turn it off, but hardcore Fire Emblem fans consider it a core component of the franchise. It’s not part of the mobile game, though.

Losing a character means more that saying goodbye to a useful soldier. While many Fire Emblem games have multiplayer features, the story-based, single-player campaign is the main focus. You’ll grow to like your band of heroes, which can make losing one in battle reason enough to restart the whole fight. 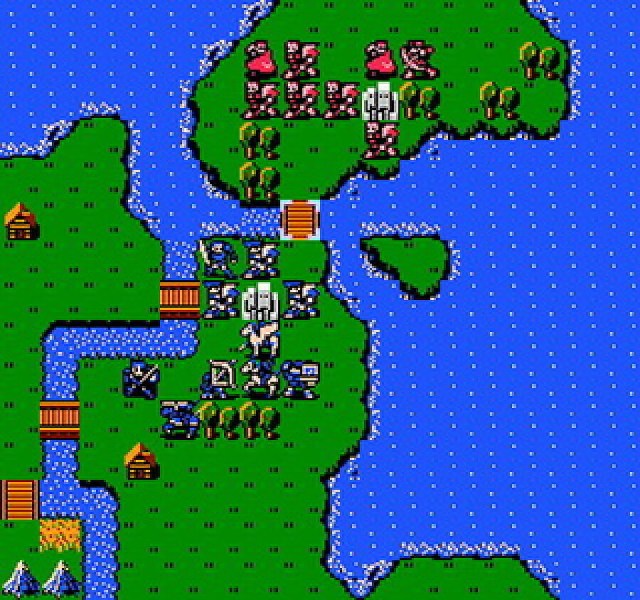 Above: Fire Emblem on the Famicom.

The first Fire Emblem came out for the Famicom (known as the Nintendo Entertainment System in the U.S.) in 1990. Nintendo’s Intelligent Systems team developed the game. The group previously created Famicom Wars, another tactics game that launched a series we’d eventually know in the U.S. as Advance Wars.

Fire Emblem (subtitled Shadow Dragon and the Blade of Light) introduced many features that would become standard in the franchise, including turn-based, grid-based battles, perma-death, and class-based characters. Its hero, Marth, became the series’ most recognizable character.

It would see one sequel for Famicom in 1992, Fire Emblem Gaiden, that told a story that happened at the same time as the events of the first game. In 1994, the franchise’s first game for the Super Famicom (Super Nintendo Entertainment System in the U.S.) came out. Fire Emblem: Mystery of the Emblem is half a remake of the first Fire Emblem and half a sequel that continues Marth’s story. Nintendo would release two more Fire Emblem games for the Super Famicom, Genealogy of the Holy War and Thracia 776, with the latter coming in 1999, long after the Nintendo 64’s 1996 release.

But none of these games ever appeared outside of Japan. But we got a taste of Fire Emblem from an unusual source. 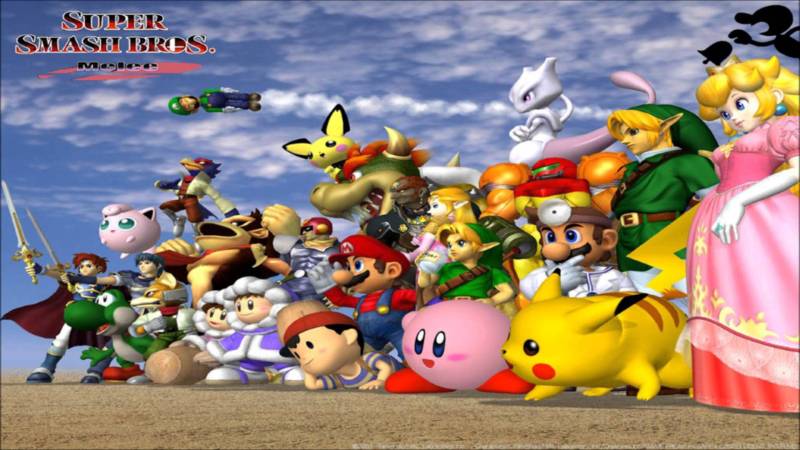 An unlikely debut in the U.S.

Super Smash Bros. Melee is a fighting game that came in 2001, shortly after the release of the GameCube. It features a roster of famous Nintendo characters, such as Mario, Link, and Pikachu. But it also has two hidden characters: Marth and Roy. We mentioned Marth before, but Roy was the hero of Fire Emblem: The Blinding Blade, which would come out for the Game Boy Advance in 2002. His inclusion in the roster was a promotional stunt.

But for most Smash Bros. fans outside of Japan, both of these characters came out of nowhere. The game told them that they were from Fire Emblem, but few had ever heard of the series. It was like learning about a secret Nintendo franchise.

Super Smash Bros. Melee sold 7 million copies, becoming the GameCube’s best-selling game. Even today, many fans play the game competitively in tournaments. Gamers in the U.S. finally knew about Fire Emblem, and they felt like they were missing out.

In 2001, Nintendo released Advance Wars for the Game Boy Advance, the first entry in that other Intelligent Systems strategy series to release outside of Japan. Its success showed Nintendo that its portable audience had a hankering for strategy games. 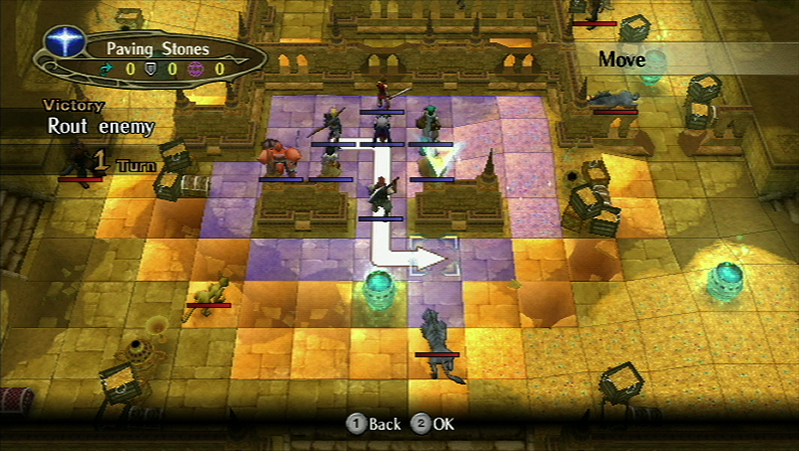 Above: Fire Emblem: Radiant Dawn for the Wii.

Thanks to the success of Marth and Roy in Melee and Advance Wars, Nintendo decided to release the next Fire Emblem game outside of Japan. This was the seventh entry in the series, and it was simply called Fire Emblem in the West. It came out for the Game Boy Advance in 2003. After this, most games in the franchise would receive global releases.

Although it started on home consoles, the series was now comfortable finding its niche on portable systems. Nintendo released The Sacred Stones for the Game Boy Advance in 2004, while a remake of the first Fire Emblem came out for the DS in 2008.

But the series still showed up on home consoles. After skipping the Nintendo 64, Path of Radiance came out for the GameCube in 2005. It had a direct sequel, Radiant Dawn, release for the Wii in 2007.

But despite all of these releases, the series was in a decline with sales slowing. Nintendo told Intelligent Systems that the next Fire Emblem could be the last if it wasn’t a hit. 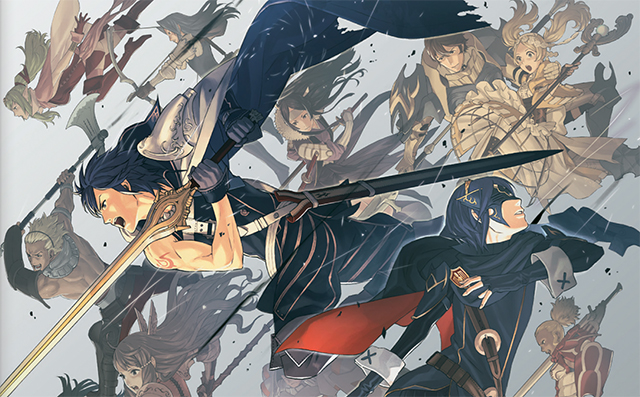 Above: Fire Emblem: Awakening was one of many great exclusives in 2013 for the 3DS.

Luckily, that next game was Fire Emblem: Awakening for the 3DS, which came out in 2012 in Japan and in the U.S. in 2013. It sold over 1.9 million copies worldwide, and it became the most successful Fire Emblem game in the West.

Awakening retained the series’ core gameplay while upping the presentation, using gorgeous cutscenes to help tell its story. It also made player’s feel closer to their characters by allowing them to talk to each other between fights. Not only would these scenes flesh out their personalities and relationships, but characters who were friends would become stronger in battle if they fought next to each other.

But those relationships didn’t stop at friendship. You could also have members of your army marry each other. And, thanks to some time-travelling shenanigans, you could recruit their children as playable characters. The kids would have attributes from both parents, so even choosing who you wanted to get married required strategy.

Awakening took Fire Emblem from the verge of collapse to new heights. Nintendo followed it up with Fire Emblem: Fates in 2015 in Japan and 2016 in the U.S., which retained many of Awakening’s systems and mechanics. However, it featured three unique campaigns that told its story from different perspectives. It has sold over 1.84 million copies worldwide, not even counting digital sales. 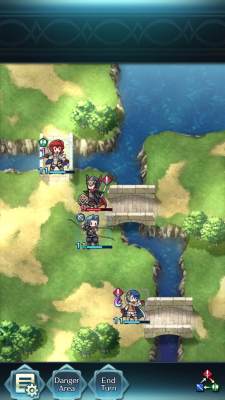 Above: This guy’s toast.

That Nintendo would turn to Fire Emblem so early in its mobile endeavors shows the faith that the company has in the series these days. Unlike Super Mario Run, Heroes will be a free-to-play game that will depend on in-app purchases to each money. Nintendo is hoping that the series addicting strategy gameplay can keep players hooked.

Heroes has the same grid-based battles as past Fire Emblems, but its action take place in a smaller map designed to fit a phone screen. You can also recruit characters from across Fire Emblem’s history. Heroes isn’t just a new experience, but it’s a celebration of the franchise’s past.

Heroes could expose to Fire Emblem to an even bigger audience. The mobile gaming industry is worth $36 billion. Super Mario Run achieved 40 million downloads in four days. While that game had the advantage of the Mario name, Nintendo itself is a huge brand. And strategy games have proven popular on mobile, notably with hits like Clash Royale and Mobile Strike. 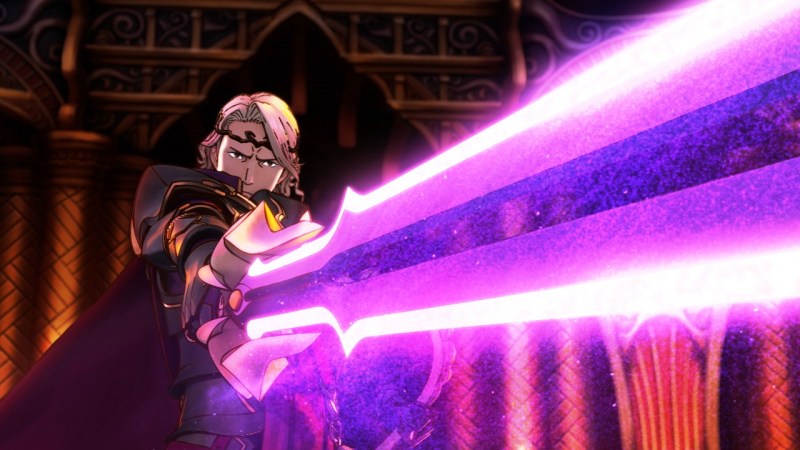 Above: A giant sword always helps.

The future of Fire Emblem

But Fire Emblem has more going on than the mobile game. The series’ second game, Fire Emblem: Gaiden, is getting a remake for the 3DS. It’s called Shadows of Valentia, and it’s coming out on May 19. Fire Emblem is also getting its own Dynasty Warriors spinoff, similar to what The Legend of Zelda franchise had with Hyrule Warriors. Fire Emblem: Warriors is coming out for the Switch and New Nintendo 3DS later in 2017.

We’re also getting an new entry in the series for the Switch in 2018. This will be the first Fire Emblem game to come out for a home console since Radiant Dawn released in 2007 for the Wii. But Fire Emblem seems like a natural fit for the Switch, which players can take with them on the go, replicating the portable experience.

The franchise is busier than its ever been. Counting Heroes, we have four Fire Emblem games coming out in the next couple of years. The series has gone from Japan-only obscurity from earning a place near the top of Nintendo’s stable.