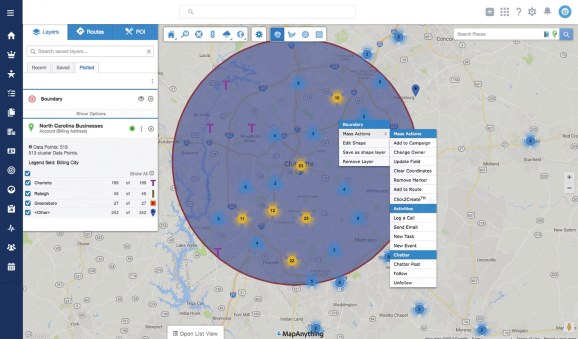 MapAnything, which provides location services for businesses, today announced a funding round of $33.1 million.

Founded in 2009, the Charlotte, North Carolina-based startup has developed a series of map-based products built on Salesforce. “In your personal life, you use Google Maps, Waze, Yelp, and a host of other tools to make your life more productive and efficient,” said John Stewart, chief executive of MapAnything, in a statement. “We are doing the same thing, using the same location-centric approach, for your business life.”

The startup’s core product helps users visualize their data on a map and interact with it to drive productivity. MapAnything provides its more than 1,400 customers with a software as a service (SaaS) offering that starts at $30 per user per month. Customers include Time Warner Cable, Herff Jones, and Dyax. Starting this spring, MapAnything will be extending its services to ServiceNow, which is one of its investors.

Competitors include startups like BatchGeo, but also tech giants like Microsoft, which took a stab at locations and maps in 1999 when it launched MapPoint. However, it discontinued the service in December 2014.

Columbus Nova led this round of funding, with first-time participant ServiceNow Ventures joining. Harbert Venture Partners, Salesforce Ventures, and individual investors Michael Lazerow and former NBA commissioner David Stern also joined. MapAnything has raised a total of $40.4 million to date. It will primarily be using the new money for research and development (R&D) and seek out strategic acquisitions in the geo-location and Internet of Things (IOT) spaces.

The startup currently has 148 employees.