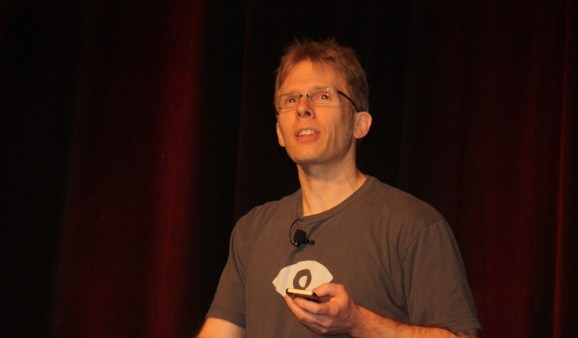 John Carmack, the chief technology officer at Oculus and one of the brilliant minds in tech, wrote an angry post on Facebook about the $500 million jury verdict against Oculus in the lawsuit in which ZeniMax alleged that Carmack and others stole proprietary information on virtual reality.

The post is highly unusual, as Oculus and its owner, Facebook, are expected to appeal the verdict. ZeniMax has hinted that it might seek an injunction against sales of the Oculus Rift VR headset, which could generate an estimated $425 million in revenue in 2016 and 2017, according to market researcher SuperData Research. (See our analysis on the verdict here).

The jury found that Oculus founder Palmer Luckey violated a nondisclosure agreement with ZeniMax (as he evidently met with Carmack while the latter was still working for ZeniMax’s id Software division). The jury also said Carmack, Oculus CEO Brendan Iribe, and Oculus violated ZeniMax’s trademarks. The jury did not, however, find any of them in violation of the trade secret theft statute.

[Update: In response to Carmack’s post, ZeniMax said, “In addition to expert testimony finding both literal and non-literal copying, Oculus programmers themselves admitted using ZeniMax’s copyrighted code (one saying he cut and pasted it into the Oculus SDK), and Brendan Iribe, in writing, requested a license for the ‘source code shared by Carmack’ they needed for the Oculus Rift. Not surprisingly, the jury found ZeniMax code copyrights were infringed. The Oculus Rift was built on a foundation of ZeniMax technology.”]

As for the denial of wiping, the Court’s independent expert found 92 percent of Carmack’s hard drive was wiped — all data was permanently destroyed right after Carmack got notice of the lawsuit — and that his affidavit denying the wiping was false.

As we noted in the analysis, it seems quite tragic that Carmack, the winner of the lifetime achievement award from the peer-based Game Developers Choice Awards in 2010, was caught up in such a legal nightmare.

Then Facebook acquired Oculus for almost $3 billion in the spring of 2014, igniting a new boom in enthusiasm for VR. In May 2014, ZeniMax sued for trade secret theft and a number of other violations. Yesterday, the jury handed down its verdict.

In the post on Facebook, Carmack said he reiterated that he did not steal anything or wipe his hard drive, as ZeniMax alleged. He also went into the details about whether he violated any copyrights when he re-created code for the Oculus Rift. In Carmack’s view, copying a book like Harry Potter word for word is a copyright violation, but writing a story that follows Joseph Campbell’s “hero’s journey” meme — which is a mythical archetype of a story used in hundreds of books — should not be considered a violation.

The ZeniMax vs Oculus trial is over. I disagreed with their characterization, misdirection, and selective omissions. I never tried to hide or wipe any evidence, and all of my data is accounted for, contrary to some stories being spread.

Being sued sucks. For the most part, the process went as I expected.

The exception was the plaintiff’s expert that said Oculus’s implementations of the techniques at issue were “non-literally copied” from the source code I wrote while at Id Software.

This is just not true. The authors at Oculus never had access to the Id C++ VR code, only a tiny bit of plaintext shader code from the demo. I was genuinely interested in hearing how the paid expert would spin a web of code DNA between completely unrelated code bases.

Early on in his testimony, I wanted to stand up say “Sir! As a man of (computer) science, I challenge you to defend the efficacy of your methodology with data, including false positive and negative rates.” After he had said he was “Absolutely certain there was non-literal copying” in several cases, I just wanted to shout “You lie!”. By the end, after seven cases of “absolutely certain”, I was wondering if gangsters had kidnapped his grandchildren and were holding them for ransom.

If he had said “this supports a determination of”, or dozens of other possible phrases, then it would have fit in with everything else, but I am offended that a distinguished academic would say that his ad-hoc textual analysis makes him “absolutely certain” of anything. That isn’t the language of scientific inquiry.

The notion of non-literal copying is probably delicious to many lawyers, since a sufficient application of abstraction and filtering can show that just about everything is related. There are certainly some cases where it is true, such as when you translate a book into another language, but copyright explicitly does not apply to concepts or algorithms, so you can’t abstract very far from literal copying before comparing. As with many legal questions, there isn’t a bright clear line where you need to stop.

The analogy that the expert gave to the jury was that if someone wrote a book that was basically Harry Potter with the names changed, it would still be copyright infringement. I agree; that is the literary equivalent of changing the variable names when you copy source code. However, if you abstract Harry Potter up a notch or two, you get Campbell’s Hero’s Journey, which also maps well onto Star Wars and hundreds of other stories. These are not copyright infringement.

There are objective measures of code similarity that can be quoted, like the edit distance between abstract syntax trees, but here the expert hand identified the abstract steps that the code fragments were performing, made slides that nobody in the courtroom could actually read, filled with colored boxes outlining the purportedly analogous code in each case. In some cases, the abstractions he came up with were longer than the actual code they were supposed to be abstracting.

It was ridiculous. Even without being able to read the code on the slides, you could tell the steps varied widely in operation count, were often split up and in different order, and just looked different.

The following week, our side’s code expert basically just took the same slides their expert produced (the judge had to order them to be turned over) and blew each of them up across several slides so you could actually read them. I had hoped that would have demolished the credibility of the testimony, but I guess I overestimated the impact.

Notably, I wasn’t allowed to read the full expert report, only listen to him in trial, and even his expert testimony in trial is under seal, rather than in the public record. This is surely intentional — if the code examples were released publicly, the internet would have viciously mocked the analysis. I still have a level of morbid curiosity about the several hundred-page report.

The expert witness circuit is surely tempting for many academics, since a distinguished expert can get paid $600+ an hour to prepare a weighty report that supports a lawyer’s case. I don’t have any issue with that, but testifying in court as an expert should be as much a part of your permanent public record as the journal papers you publish. In many cases, the consequences are significant. There should be a danger to your reputation if you are imprudent.