Rec Room is a zany social virtual reality game, where you can play within a virtual sports environment while chatting with others in the same virtual space. And it was novel enough to enable its developer, Against Gravity, to raise $5 million in funding.

Rec Room lets VR users from around the world meet and interact with each other in the medium of VR, which feels more immersive because it gives users the ability to roam through it in 360-degrees. You can play games, like tossing a ball to each other or playing ping-pong.

Fajt formed the company with colleagues from Microsoft’s HoloLens team, which is creating augmented reality technology. The game launched in the late spring of 2016, as the HTC Vive and Oculus Rift headsets debuted.

The founders didn’t want to just build a chat room; they wanted to build a community. That turned out to be the right move, as Rec Room has proved popular. Fans have played more than a million games together, and more than 100,000 played in the second half of 2016. For the fledgling medium of VR, that’s a pretty good crowd. Fans have also fired nearly a billion paint balls at each other in VR. The average play time is 35 minutes. 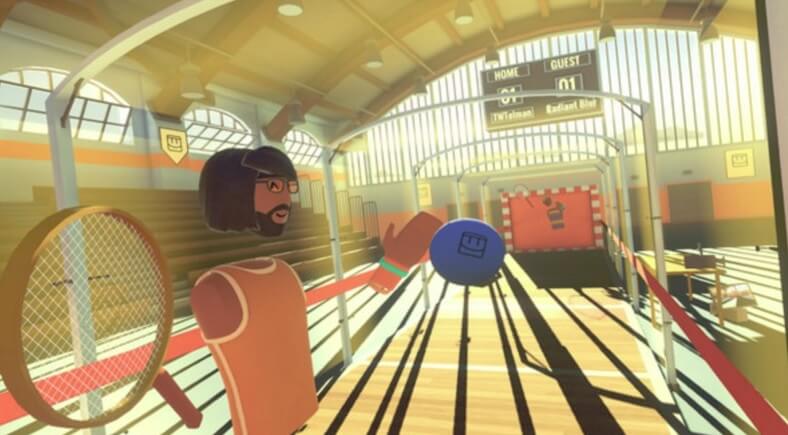 “We loved their vision around social and identity in VR, and their deep backgrounds with HoloLens and gaming at Microsoft,” said Chris Fralic, partner at First Round Capital, in an email to GamesBeat.

In the near term, Fajt said Rec Room will add a cooperative play opportunity in the form of a quest. Four people will party up in a group and fight with monsters or trolls and then collect loot along the way. They will use weapons that are more fun to use physically with VR hand controls. So you’ll be shooting arrows by going through the motions physically.

“The tone is fun, whimsical, and silly,” Fajt said. “We will keep making investments that help people connect in VR. People are making friends around the globe. We want them [re-creating] the experiences that they have and making lasting friends.”

He also said he wanted Rec Room to be welcoming for people from all walks of life. The company will also be adding more tools to combat harassment within the community.

“We really want to be a leader in helping limit and removing online harassment,” Fajt said.

Against Gravity’s approach is to “try and find fun and double down on that fun,” he said.

“I personally believe that AR and VR are going to be the next computing platforms,” he said. “You’re going to see this market grow over the coming decades. It’s definitely an exciting group to be.”