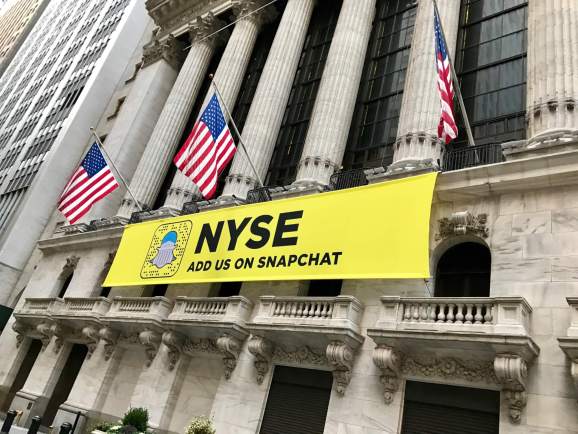 Snap today filed its S-1 paperwork with the Securities and Exchange Commission (SEC), triggering the process to go public. The company aims to raise $3 billion in the initial public offering (IPO) and will subsequently trade on the New York Stock Exchange under the symbol SNAP.

Today’s filing shows that Snap came through with a $514.6 million net loss on $404 million in revenue in the year that ended on December 31, 2016. Revenue for that period was up nearly 500 percent from the prior year. Snapchat had 1,859 employees as of December 31, according to the filing.

Snap confidentially filed for its IPO in October and has enlisted the help of bankers Morgan Stanley, Goldman Sachs, J.P. Morgan, Deutsche Bank, Barclays, Credit Suisse, and Allen & Co. to lead this effort. At its current size, this will be the largest technology IPO since Alibaba in 2014, said Renaissance Capital.

(Scroll to the bottom of this post for an embedded version of the filing.)

Formerly known as Snapchat, Snap is the first high-profile tech company to enter the public market this year, but it will join recent entrants including Coupa, Line, Nutanix, SecureWorks, Square, and Twilio.

When it was first launched, Snapchat was a messaging app with a simple premise: Chat with your friends and messages will disappear in 24 hours. It stood out starkly against Facebook Messenger, Twitter, Skype, Google Hangouts, and other chat apps, whose conversations were permanent until you manually erased them.

Since then, Snap has made strides to evolve itself, shifting its app to be a place to consume premium content from content providers like NBCUniversal, launching careers of influencers, and improving discovery of events nearby powered by its Vurb acquisition.

Much of this was apparent just by looking at the company’s rebranding from Snapchat to Snap and its description changing to label it a camera company. Its first hardware device, Spectacles, reflects the scale of founder Evan Spiegel’s vision for the company.

Facebook’s failed attempt to buy Snapchat back in 2013 is a recurring story for Snap. Spiegel refused to sell the company for $3 billion, an amount that would have ranked among the most expensive purchases Facebook ever made — the social networking company paid $1 billion for Instagram, $2 billion for Oculus VR, and $19 billion for WhatsApp.

Although its advances were rejected, Facebook has not shied away from pursuing efforts to unapologetically copy the best features of the ephemeral messaging app. One perspective is that Facebook might want to put a dent in Snap’s public debut, perhaps still upset about how acquisition talks went. Another is that Facebook sees millennials and young people using Snapchat more and thinks copying those features and applying them to Messenger, Instagram, and other Facebook properties could win this demographic back.

2016 was an active year for Facebook; it seemed to have found its groove in mimicking Snap. The social networking company moved into creative lenses and filters with the acquisition of MSQRD and additional functions on Messenger. It has also added scannable Snapchat-like QR codes to its messaging app; launched a Story mode in not only on Instagram, but also Messenger; and developed geofilters and masks for live video.

One could say that imitation is the sincerest form of flattery, right?

With 150 million people consuming stories on Instagram daily, Facebook could certainly cause some potential shareholders to second guess about the long-term investment in Snap. In fact, it would be surprising if Spiegel’s team doesn’t include the social network giant as a significant risk to its future.

The land grab for advertisers

Investors are eager to understand Snap’s benefit to advertisers, a key revenue driver for the company. Over the years, Snap’s flagship app has evolved from charging $750,000 so brands can market their wares across the app to opening up its Discover offering to companies like Comedy Central, Food Network, CNN, National Geographic, Vice, Yahoo, and Warner Music Group, to create their own Stories.

With more than 150 million daily active users, Snap appears to have a product that brands think they’ll be able to capitalize on for the next few years which could divert marketing dollars away from Google and Facebook. To whet the appetite of marketers more, Snap this week introduced the latest incarnation of its ad platform, opening it up to third-party providers like Kenshoo, Kinetic Social, AdParlor, HyFn, Adglow, and Videology. It doubles down on efforts to show the potential of advertising on Snapchat — an Ads application programming interface (API) was launched in October. The company has essentially taken a page straight from Facebook’s playbook.

Snap is also bringing in money through custom geo-filters, which became available last year. Previously, users relied on the good graces of Snapchat to launch geofilters around large events such as the Olympics, World Cup, parades, marches, and other activities. Now there’s on-demand geofilters where anyone can design their own for a price starting at $5, and they also support Bitmojis.

Snap has never released data around the traction it has seen for on-demand geofilters. Will this be material to the company in the long term?

A long road of funding

Snap’s funding history is a convoluted one. The Venice, California-based startup raised a $485,000 seed round from Lightspeed Venture Partners in 2012 after partner Barry Eggers learned that his daughter was using it with her high school friends.

The subsequent $13.5 million round, led by Benchmark, has a similar origin. Benchmark partner Mitch Lasky decided to invest in the photo-sharing app after hearing about it from his teenage daughter. Benchmark was also an investor in Instagram, which Facebook bought for $1 billion in 2012.

Naturally 2014 was like a rollercoaster ride — rumors of new investors pouring hundreds of millions of dollars spread across media outlets, spiking curiosity all around. A Form D filing dated December 31, 2014, revealed that the startup raised $485 million from 23 investors in yet another round of funding. New investors included Yahoo, Alibaba, and Kleiner Perkins Caufield & Byers.

A few months later, Snapchat announced another staggering fundraise, totaling $537.6 million. At that point, the startup had built up to 100 million daily active users. Its series F round was announced about a year later. Despite concerns that the ephemeral photo-sharing app was struggling to attract advertisers, it still managed to raise a whopping $1.81 billion. Investors in this round included General Atlantic, Sequoia Capital, T. Rowe Price, Lone Pine, Glade Brook Capital, IVP, and Fidelity, among others.

With its $3 billion IPO, Snap must prove to investors that it’s not a one-trick pony. It can do that by launching larger-scale hardware projects or by expanding its advertising reach with new apps. But today, the company is showing that it has already made a lot of progress since its 2011 origins.