Evony is getting that Super Bowl bump. 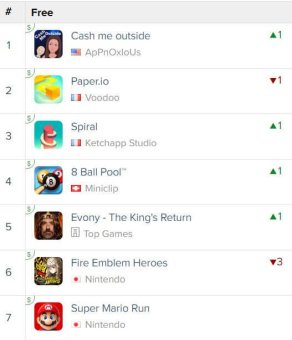 Above: Evony is on the way up while Fire Emblem is beginning to come down.

The free-to-play city-building Flash game Evony from 2009 is the No. 5 game on the iPhone download charts in the United States, according to data-tracking firm App Annie. Developer Top Games aired an ad during the Super Bowl to attract new players, and it looks like that commercial is helping. Prior to the ad, Evony wasn’t even in the top 500 most downloaded games on iOS or Android. Now, it’s in the top 10 on both platforms, and this opens up Evony to the $36.6 billion mobile gaming industry following years of operating primarily on the PC where it is best known for web ads featuring half-dressed women.

Top Games uploaded the ad, which features The Walking Dead star Jeffrey Dean Morgan, to YouTube on Friday. That pushed the game to No. 11 on the U.S. iPhone chart by the end of that day. On Saturday, it jumped to No. 6, and now — following the Super Bowl itself — Evony is continuing to move up the chart even as competing games like Fire Emblem: Heroes fall out of the top 5.

This shows the power of marketing for free-to-play games — especially during an event where many of the people who are watching are also simultaneously using their smartphones. Seeing a commercial could get someone to check out the app store, or it could make people more likely to click on an ad for a game if they come across one online or in another app.