Playing a lot of World of Warcraft can now help you unlock that Mercy skin in Overwatch that you’re craving.

Blizzard has changed the way the WoW Token works. The WoW Token is a special form of currency used in World of Warcraft. Players can buy them with real money and then sell them in the in-game auction house, where other players can spend in-game gold to buy them and use then redeem them for 30 days of subscription time to the massively multiplayer online title. Basically, it gives Warcraft players a way to spend real money to get in-game gold or to use their gold to buy game time without spending real money. Now, players can also redeem WoW Tokens to send money directly to their Battle.net balance. 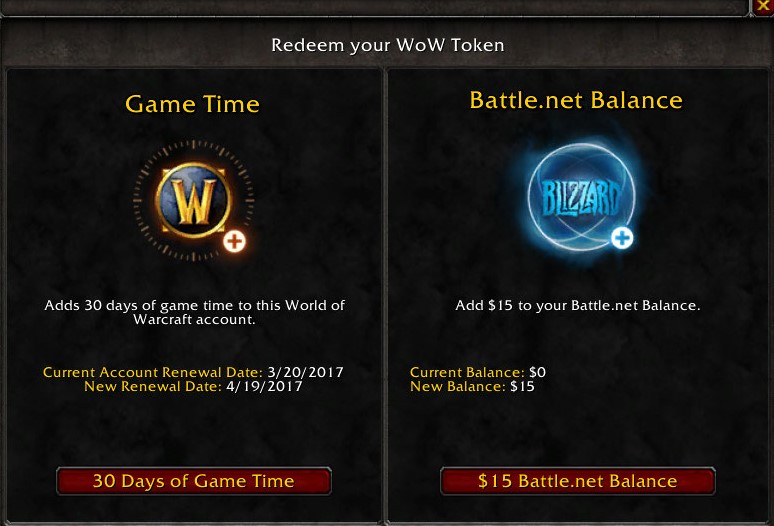 Above: What the WoW Token screen looks like when you redeem the item.

Players can use their Battle.net balance to buy cosmetic items in World of Warcraft, but it also allows them to purchase items in other Blizzard games like Heroes of the Storm and Overwatch. So, World of Warcraft’s richest denizens can now buy Overwatch loot crates with their gold … in a roundabout way.

Blizzard has released a video explaining how the new WoW token works, which you can watch above.

The prices of the WoW token fluctuates based on the market (how many people are buying and selling them), so you’re never sure exactly how much gold you’ll get for selling one until you put it in the auction house. According to WoW Token Info, a site that tracks WoW Token prices, they are going for around 65,575g on North American servers.

This new functionality is make the WoW Token a hot item. Right now, you may have a hard time actually finding one for sale in the auction house. Conversely, if you’re willing to spend real money to buy one, you could make decent gold.