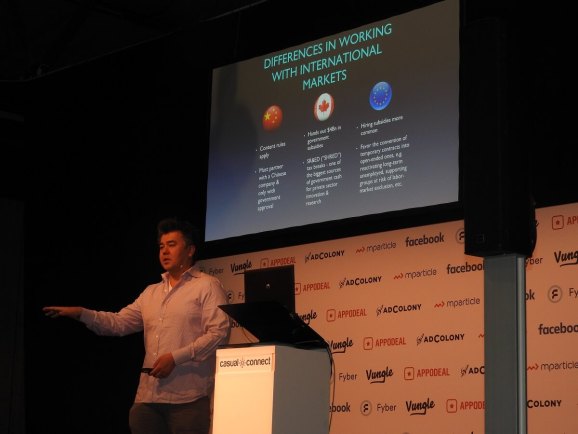 Andrew Sheppard, CEO of Gree International, the overseas arm of Japan’s Gree, gave the opening talk at Casual Connect Europe in Berlin. He talked about how game companies should seize the opportunity to differentiate themselves by using bundling or unbundling tactics.

Sheppard borrowed this idea from Jim Barksdale, former Netscape CEO, who observed that lot of money has been made bundling or unbundling products, services, and companies in the history of technology. Sheppard is applying that idea to games.

So what’s bundling? He pointed to Grand Theft Auto, one of the most successful and differentiated series of games in the industry. The game combines a bunch of genres, such as shooting, combat, driving and racing, strategy, deep narrative, and player-versus-player multiplayer. Each one of these features could be a different game.

But Rockstar Games has thrived by mastering each different experience and integrating it into the open world of GTA, and the result has been a gold mine. Grand Theft Auto V has generated more than 75 million units sold since it launched in 2013.

To try to outdo the competition in mobile games, Gree International is creating a big, unannounced game that includes several kinds of mechanics, combining first-person shooting, third-person strategy, and other features as well. If the company can execute on these games, it has a chance to deliver something unique in the market, Sheppard said.

Another good example of bundling is Call of Duty: Infinite Warfare, which includes the main single-player campaign, multiplayer, the Zombies co-operative mode, and, in the deluxe edition, the remake of Call of Duty: Modern Warfare Remastered. Activision Blizzard invested heavily in each one of those features so that Call of Duty could continue generating more than $1 billion in revenues per year.

By the same token, Sheppard said that a number of mobile game companies have succeeded by unbundling features from something more complex. He noted that Clash Royale, for instance, focuses only on fun multiplayer combat, as it is possible to do that experience well on mobile devices.

Netflix is a good example of unbundling, where the service takes one feature of cable TV networks — showing movies and TV shows — and makes them available over the web as a direct consumer channel.

One company that aggregated a lot of features into a single title was Playrix, which bundled a variety of things into its Gardenscapes title. The result was a big windfall for Russia’s Playrix. The company had 20 million installs altogether in 2015, and generated $30 million. By 2016, that grew to more than $180 million in revenue and 100 million installs.