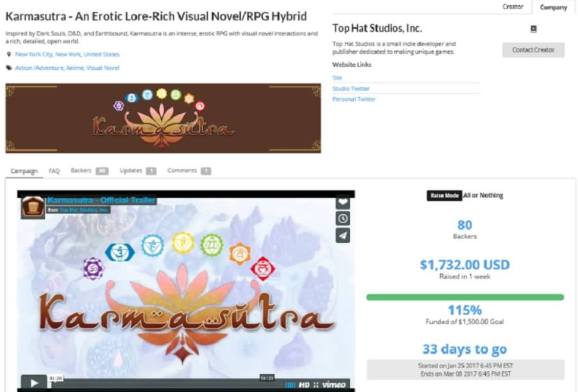 Kimochi Red LIght will highlight developers who want to raise money for games aimed at audiences for those 18 years and older.  In launching Kimochi Red Light, Nutaku hopes to take some of the stigma out of making X-rated games and to make it easier for developers to get started in the genre.

Montreal-based Nutaku said that (outside of payment charges) 100 percent of money raised from the crowdfunding campaigns will go to the developers. The first adult campaigns will raise money for projects for developers in New York, the United Kingdom, and Ghana.

“Kimochi Red Light is going to carve a new path for artists and game developers to create content as part of the rapidly emerging mature gaming market,” said Nutaku spokesperson Mia Mason, in a statement. “Not only that but this platform is unlike any other because it’s uncensored and uncompromising, just how art should be. We’re thrilled to act as a non-profit catalyst for the industry and the gaming community.”

As of the official launch, current campaigns active on the site that are available for funding include: Episicava, The Tower of Five Hearts, Virtual Ro:Mance, Dimlight City, Karmasutra, Battle Girls, Echo Tokyo, and Phantasma Magic. Since the beta testing phase was launched in early January, numerous campaigns have already surpassed their funding goals.

Nutaku.net is an online gaming portal featuring adult games from around the world. Created in 2014, the site debuted by distributing Japanese browser games, and now it has more than 22 million visitors per month.