Flipboard chief executive Mike McCue once opined that he believes the media publishing platform should be “the go-to place for what you’re passionate about and show multiple perspectives from people that are just as passionate, if not more.” Today, the company is following through on that idea by launching a major redesign that puts passions front and center, further helping the platform’s 100 million monthly active users better understand how to use it.

Included in this update are what Flipboard calls Smart Magazines, which offer content around very specific topics, as well as new social actions, a redesigned profile, a “passion picker,” and more ways to discover what’s worth reading about.

After years of curating content from users and slowly integrating smart technology from its Zite acquisition, the time has come to shift from trends and casual interests to what people are truly passionate about. McCue, who sat down for an interview with VentureBeat, defines “interests” as things “that you do for fun, for work, for your life. It’s something that you care about as a citizen of the world,” while “passions” are things “you actually spend time doing, something that you want to take action on.” Flipboard seeks to be the place for people to pursue their passions and stay informed.

We all have a lot of interests, such as self-driving cars, TV dramas, pets, or even scrapbooking. But there are probably only a few things we can claim to truly be passionate about, and Flipboard’s redesign wants to cut through the noise and surface those things for you.

To accomplish this, Flipboard needed to take advantage of personalization. After all, you might be interested in photography, but there are different focuses, such as street scenes versus nature or mirrorless cameras versus DSLRs. Previous iterations of the app did offer such granularity, but McCue admitted that you had to “really know how to use the product.” The latest redesign should take care of that.

There were five major goals laid out for the 2017 version of Flipboard: The first was identifying up to five passions people had. The second was to provide users a highly personalized feed for each passion so they’d constantly see relevant content. Third, these feeds had to be incredibly easy to access — previously, as very active user followed more topics, the tiles within Flipboard became excessively cluttered (plus, only the cover stories were really personalized).

The fourth goal was rallying people around passions, turning the app into more of a community hub based on these topics and magazines. Lastly, the company wanted to simplify and tighten up the experience while also adding some elements of “surprise, wow, and beauty.” 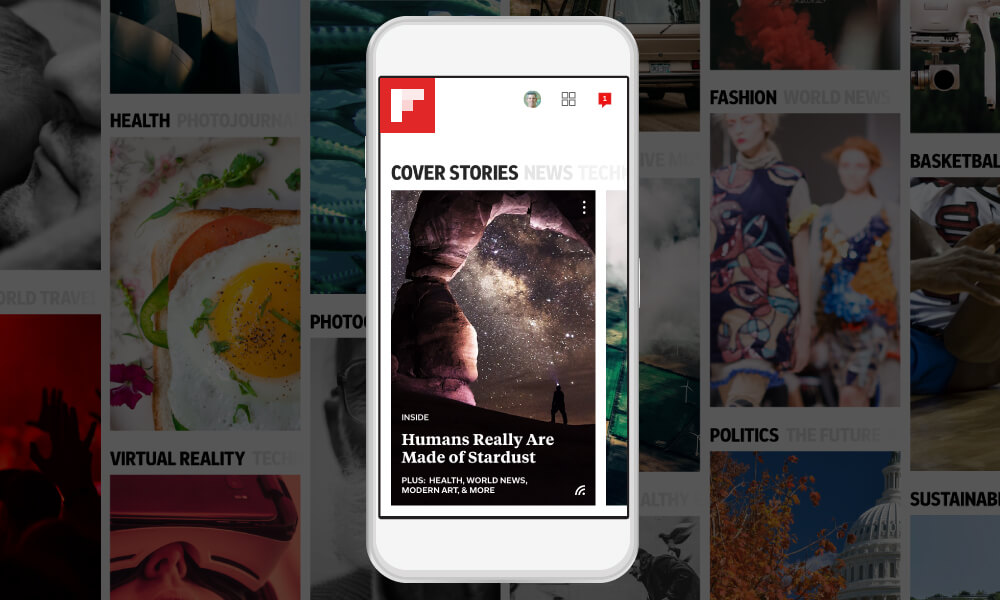 Above: Flipboard 4.0: Smarter magazines designed around your passions.

Starting today, users will find an app with a brand-new layout, one with a strong focus on images and an updated user interface. Instead of a smorgasbord of articles that appear within your home feed, Flipboard now provides a cleaner interface filled with your cover stories (those stories that it thinks resonates with you, like an RSS feed) and up to nine magazines centered around your passions. If you have more, they’re stored under the Magazines tab within your user profile.

“In Flipboard 3.0, you picked from a range of topics at the beginning, and it gave you a snacking feed. It’s great because it’s like Twitter, but you’re following topics. But the more you use the product, the more random cover stories become, and people don’t use the tiles to navigate,” McCue explained. “For those that are new, they get the one shot at the beginning to personalize the product and then have to figure it out from there. The passion screen will be available all the time.”

He continued: “If we get you to follow a passion, you’re much more likely to be a valuable user. The problem today is that you pick your topics, but you can’t go back. Your life changes and your interest changes. How do you get Flipboard to match your changing interests?” 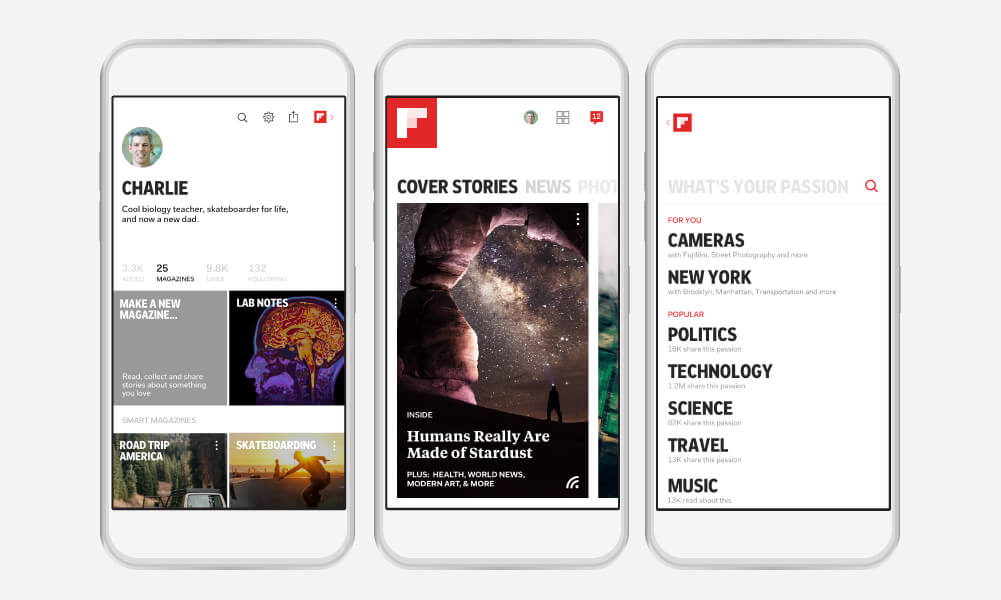 Above: Passion picker feature within Flipboard 4.0.

Because no one has declared their passions on the new tool yet, Flipboard uses different methods to onboard users. For those with an account, machine learning is used to suggest passions based on their reading habits. As for new users, the app will offer random topics, such as politics, sports, entertainment, and others from a pre-determined list.

“One of the things that we wanted to keep as a baseline was [to] create easy access to content,” designer Matt Safian said. “We have people that like to use the feed, tiles, etc., so is there a way to blend those things? We can let you dive into feeds, but can you deliver that in a beautiful package that lets people think they have beautiful spaces? Individuals like to read different things at different times of day with different mindsets. How do you provide distinct reading spaces that feel like they’re live and dynamic?”

At the core of this update are Smart Magazines. While previous versions of Flipboard had curated magazines, these publications are going to be more personalized — think of them as a blend of the magazines the company self-curates and those created by users. “We’re pulling together everything you follow about a passion into one magazine,” McCue said. He cited the current technology magazine that exists within the app: “[It’s] currently the same as everyone else. Now your technology magazine will be personalized to you and your taste. If you’re a venture capitalist, engineer, geek person, you’ll get three different magazines.”

Above: Using the carousel on the Flipboard iOS app.

“Algorithms are one layer,” said Mike Cora, the company’s senior software engineer working on the data science team. “One new thing that we did in 4.0 was integrate user signal in Flipboard with Zite technology and influencers, brought together Zite’s topic extraction and ranking, user rating, editorial input, and influencers” to make the algorithm more intelligent.

This means everything in Flipboard is curated to surface content from reliable sources, and influencers play a big part in that. Head of curation and community Mia Quagliarello revealed that the site leverages content shared by celebrities and well-known personalities within their respective verticals. So if you’re reading a Smart Magazine around self-driving cars, you would see things posted by Elon Musk, Lyft’s John Zimmer, Google’s head of self-driving technology Dmitri Dolgov, and others with expertise in the field. The company acknowledges that not every influencer is included, so it describes its curation effort as a work in progress.

The company has also introduced a new feature to magazines: Carousels. Similar to the ad format, this feature is specifically for articles and is available in Smart Magazines. “Sometimes you want to go deeper into the news, understand it better, learn more about the author’s bio, what makes them tick, but you want to avoid having to click into a sub-feed and go back,” McCue said. The carousel feature functions like a related information section, where you can cycle through content and data related to the article you’re reading.

They’re also based around passions and are algorithmically curated, so if there’s a big story — such as the immigration ban imposed by the White House — that many people are writing about, Flipboard will round up all the stories and showcase those that are most relevant. So you might read the main story about the Muslim ban, but then see a carousel highlighting a story about what an Executive Order is, statements from the American Civil Liberties Union, a story about Speaker Paul Ryan’s reaction, insight from immigration lawyers, and others.

Moving toward a community hub

As a Flipboard user, I’m frequently flipping stories that I’ve enjoyed reading, and I oftentimes see notifications about others who have liked or reflipped things. But the app never really felt like a community — it was more like a magazine rack that you browsed until you found something to read, and then moved on. There are times when it would be nice to have a more conversational experience.

While it’s still not quite there, the latest iteration of Flipboard is moving in that community-oriented direction. “It’s about enthusiasts finding their passions,” explained Jack Mazzeo, the company’s head of platform products. “What you’ll see in Flipboard 4, we’re really creating a new baseline to build community around going forward. We have a fairly robust roadmap that’s community-related that’s post-4.0, but we recognize that people today think about Flipboard competing in the new reader market. But we think of it as so much more. We’re now bringing community on the journey with us.” 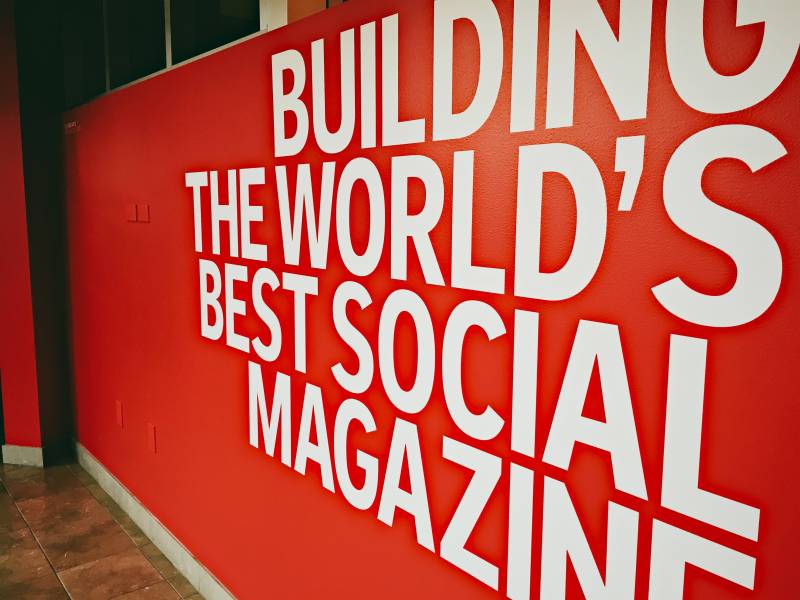 Above: Flipboard’s mission is plastered on a wall in the company’s Palo Alto, Calif. office.

As users find their passions, it’s likely new tools will emerge that allow them to do more than simply share content, perhaps tools to encourage lengthier and more meaningful discussion with others — something akin to a book club. Mazzeo said that usage data shows that people who are the most engaged on Flipboard are those who have found the topics that they’re truly excited about — from politics to travel to music — and engaged other enthusiasts.

One of the issues that plagues any company involved in media in 2017 is how to combat fake news. Facebook found this out the hard way, but how is Flipboard dealing with it? McCue claimed his app won’t encounter the same issues that have tripped up others’ platforms. “Flipboard is the definitive place to go for news and politics, not trending news,” he said. “Facebook has this thing that’s trending. [Flipboard] had trending before, but it was all about stupid news over major news. Users come to Flipboard to find out about the world, not what’s trending.” 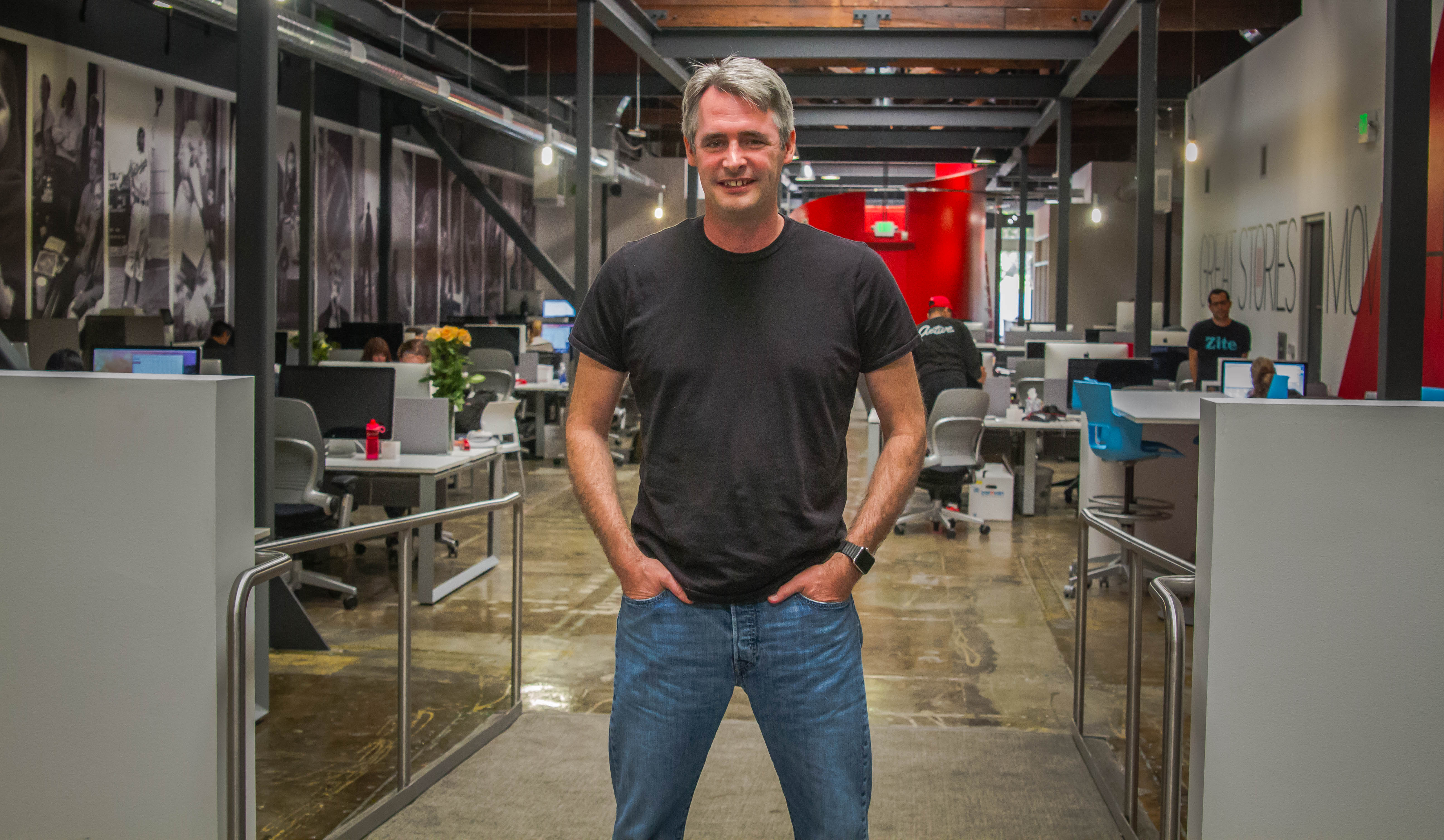 Above: Flipboard chief executive Mike McCue at the company’s new office in Palo Alto, Calif. on May 12, 2016.

He also said that the app isn’t powered by your friends, people you already know or follow. Instead, it’s a locus for curated sources, the information Flipboard collects to share with users. Editors are going to go out and vet key influencers and personalities and will bring in sources from both sides of the political spectrum, from domestic and international perspectives, and from large and small organizations. And it’s an evolving process. And the team knows it can’t possibly identify all available sources, so anyone who wants to contribute to Flipboard can email the company in order to have a post approved. If a determination can’t be made, third parties are brought in to evaluate the content.

“Any time you see a feed on Flipboard, it’s being driven…by editors, where they’ve selected every story or source by hand. Any source that’s not vetted won’t show up algorithmically in your feed unless you follow it. Nothing prevents you from going into Flipboard and following a source,” McCue affirmed.

Some publications — such as conservative publication Breitbart — won’t be approved by editors,. According to McCue, users won’t be shown content from the controversial publication because “it’s been known to display fake news” or propaganda. However, he wanted to make clear that his company wants to ensure that all sides are being presented, which is where the carousel feature will play an important role.

McCue believes there’s a reason 100 million monthly active users are coming to his app: “They want to see good quality content and not be led astray to terrible websites that are very easy to run into that are dealing with things that are trending.”

Flipboard version 4 is now rolling out across iOS, Android, and the web. Full tablet support will be available soon.