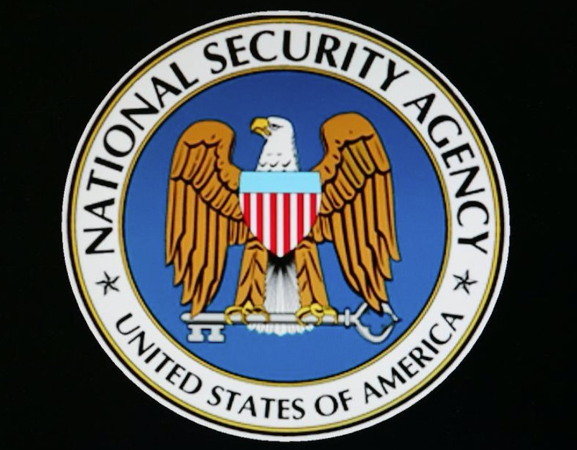 The logo of the U.S. National Security Agency is seen during a visit by U.S. President George W. Bush to the agency's installation in Fort Meade, Maryland, January 25, 2006. Bush met with workers and made remarks on American national security at the high-security installation, which he last visited in 2002.

(Reuters) — A former National Security Agency contractor was indicted on Wednesday by a federal grand jury on charges he willfully retained national defense information, in what U.S. officials have said may have been the largest heist of classified government information in history.

The indictment alleges that Harold Thomas Martin, 52, spent up to 20 years stealing highly sensitive government material from the U.S. intelligence community related to national defense, collecting a trove of secrets he hoarded at his home in Glen Burnie, Maryland.

The government has not said what, if anything, Martin did with the stolen data.

Martin faces 20 criminal counts, each punishable by up to 10 years in prison, the Justice Department said.

“For as long as two decades, Harold Martin flagrantly abused the trust placed in him by the government,” said U.S. Attorney Rod Rosenstein.

Martin’s attorney could not immediately be reached for comment.

Martin worked for Booz Allen Hamilton Holding Corp when he was taken into custody last August.

Booz Allen also had employed Edward Snowden, who leaked a trove of secret files to news organizations in 2013 that exposed vast domestic and international surveillance operations carried out by the NSA.

The indictment provided a lengthy list of documents Martin is alleged to have stolen from multiple intelligence agencies starting in August 1996, including 2014 NSA reports detailing intelligence information “regarding foreign cyber issues” that contained targeting information and “foreign cyber intrusion techniques.”

The list of pilfered documents includes an NSA user’s guide for an intelligence-gathering tool and a 2007 file with details about specific daily operations.

The indictment also alleges that Martin stole documents from U.S. Cyber Command, the CIA and the National Reconnaissance Office.

Martin was employed as a private contractor by at least seven different companies, working for several government agencies beginning in 1993 after serving in the U.S. Navy for four years, according to the indictment.

Booz Allen, which earns billions of dollars a year contracting with U.S. intelligence agencies, came under renewed scrutiny after Martin’s arrest was revealed last October. The firm announced it had hired former FBI Director Robert Mueller to lead an audit of its security, personnel and management practices.

A Booz Allen spokeswoman did not have an immediate comment on Martin’s indictment.

Martin’s initial appearance in the U.S. District Court of Baltimore was scheduled for next Tuesday, the Justice Department said.

(Reporting by Dustin Volz in Washington and Jonathan Stempel in New York; editing by Jonathan Oatis and Phil Berlowitz)