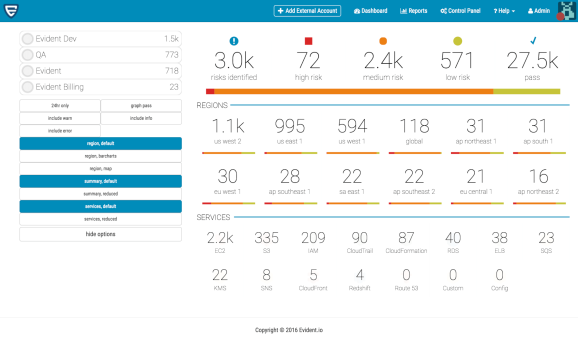 The Pleasanton, California-based startup offers customers two versions of its product — a software as a service (SaaS) for regular users, and a private SaaS, which was designed for government entities and other organizations concerned with data privacy. “It allows them to run the Evident Security Platform in their own virtual private cloud on AWS,” chief executive Tim Prendergast wrote in an email to VentureBeat.

The software license can be purchased month-to-month or on an annual subscription contract. The startup currently serves 200 customers, according to Prendergast, which include Adobe, Airbnb, Capital One, The Honest Company, HBO, Starbucks, and Sony. “It is no surprise that as the adoption of AWS and Microsoft Azure increases, organizations need security and compliance solutions for that infrastructure,” wrote the CEO.

The startup is currently building and testing a version of the Evident Security Platform that will give customers visibility across both AWS and Microsoft Azure infrastructures. “We will be delivering that product in the first half of this year and then will look to build out support for additional platforms, with Google Cloud Platform next on the list,” Prendergast said. Competitors include Dome9 and CloudPassage.

The new money will be used to grow the startup’s technical team to accelerate innovation and product development, Prendergast said. “Specifically, moving faster on support for Microsoft Azure and Google Cloud Platform, and adding new benchmarks like NIST 800-53, HIPAA, PCI, and ISO 20071 to our compliance offering,” he said.

Existing investors Bain Capital, True Ventures, and Venrock also participated in this round, which raises Evident.io’s total funding to $49 million since launching in 2013. The startup currently has 75 employees.