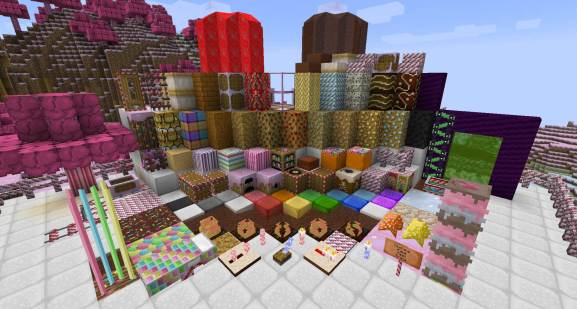 If you play Minecraft on mobile or Windows 10, your worlds could get a whole lot sweeter.

Microsoft today released the Candy Texture Pack for the Pocket and Windows 10 editions of Minecraft, its hit block-building game. The downloadable content enables players to build with blocks that will make their worlds look like something out of Willy Wonka’s factory or that Sugar Rush arcade game from Wreck-It Ralph. It costs $3. Minecraft is one of the most popular games in the world, selling over 100 million copies across all of its platforms. New content like this can keep players active while giving Microsoft a way to earn extra money.

The Pocket Edition of Minecraft is available for iOS, Android, Windows, and Amazon Fire smart devices.

The Candy Texture Pack has already been available for console versions of Minecraft since 2014. Minecraft exists on multiple platforms, including PC, consoles, and mobile. Those different versions often don’t have feature parity, with content, features, downloadable goodies, and more appearing on some editions of the game but not others.