After four years of development, Culture Shock Games is launching the We Are Chicago adventure game on Steam for the Windows PC. Built by a diverse team in the Windy City, the game is unlike other in its realistic portrayal of what it’s like to grow up on the south and west sides of Chicago.

Those mostly black neighborhoods are among the poorest and most segregated in the United States, and Michael Block, programmer and founder of Culture Shock Games, wanted to depict what it’s like growing up in environment where there are no jobs and lots of pressures to join gangs. 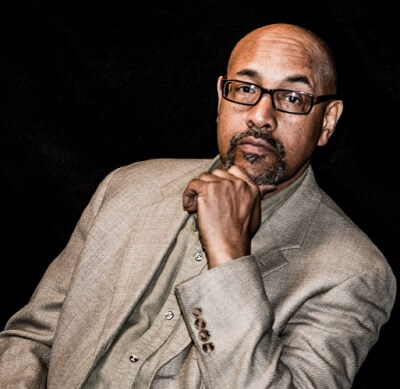 Above: We Are Chicago writer Tony Thornton.

Block, who is white, got inspired to make the game while volunteering at a soup kitchen in an all-black neighborhood. He used his money from a previous hit game, Oregon Trail Zombies, to finance the project. He enlisted Tony Thornton, a 62-year-old African American writer, to make sure the story behind the game and its characters were authentic.

“We were brainstorming a story with agency and player choice,” Block said. “We were also volunteering on the south side of Chicago. We heard people dealing with getting mugged on the way to the train and having a gun pointed at them. These were crazy things they had to deal with on a regular basis.”

“We had to think about the violence they experience in their lives,” Block said. “It was an important story, a true story. That was the start.”

We Are Chicago is a 3D first-person narrative adventure game that immerses players in the lives of Aaron, a week before his due to graduate from high school. Having grown up in the tumultuous south side of Chicago, the only constants in Aaron’s life have been his family and the community around him.

As Aaron’s world unravels, players will have to uncover who he can trust and what’s really going on in the neighborhood. As tension grows and divisions become stronger, Aaron will find himself challenged to figure out the truth and how to protect his family and the community that he loves. 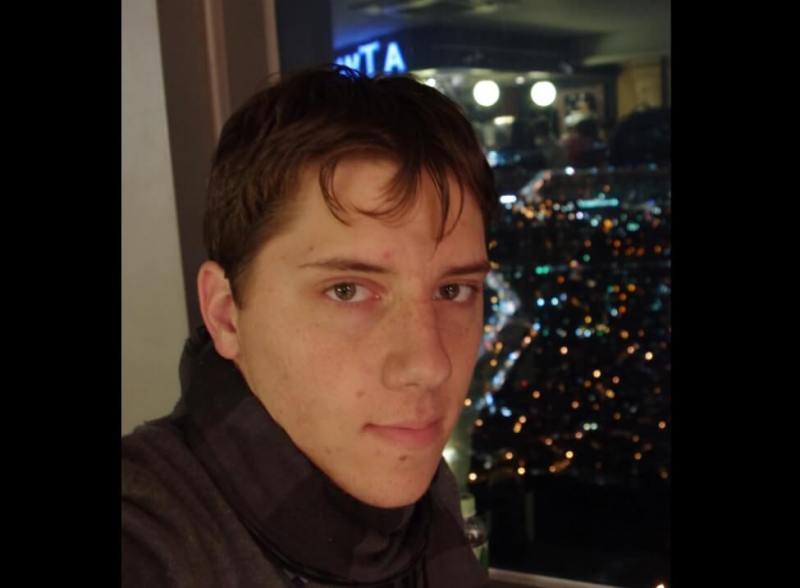 Above: Michael Block, programmer and founder of Culture Shock Games.

In addition to using Thornton as a writer, Block’s team interviewed a lot of people who grew up on the south side to extract their personal stories. The nuances from this research were enlightening. At one point in the game, a family hears a gunshot. Block’s team initially had the characters react with a lot of emotion and panic.

But Thornton said that such gunshots are commonplace. In the final scene, Aaron’s mother tells everyone to stay seated at the table and to stay away from the windows. Then she comments on how those gunshots are so rarely followed up with police sirens. Thornton hopes that such scenes will be enlightening for players who don’t know what it’s like to grow up in such places, and he also hopes that those who live in the neighborhoods will see it as a respectful depiction of their realities.

In the game, Aaron and his friends must deal with the pressure of joining a gang. But Aaron was raised by his widowed mother to do the right thing, and he has to navigate the pressure without getting killed. But the negative crime stereotypes aren’t the totality of the story of the south side, and Thornton and Block said in interviews with GamesBeat that they wanted to tell a richer story with hope. 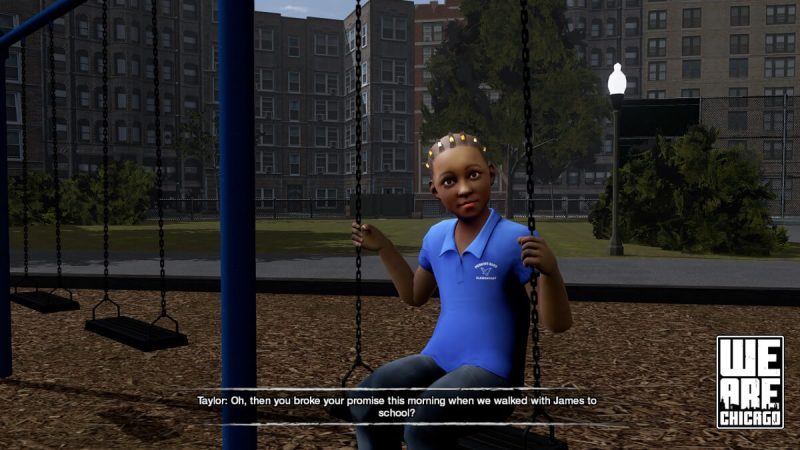 Above: Taylor is Aaron’s younger sister in We Are Chicago.

We Are Chicago immerses players in the life of Aaron, one week before his high school graduation. Having grown up in the tumultuous Chicago south side, the only constants in his life have been his family and the community around him. Suddenly, with graduation fast approaching, his best friend is nowhere to be found.

As Aaron’s world begins to unravel around him, players will work to uncover who his real friends are, who he can trust, and what’s really going on in the neighborhood. As tension grows and divisions become stronger, Aaron will find himself increasingly challenged to figure out the truth and how to protect his family and the community that he cares so deeply about.

Players will explore a realistically depicted Chicago neighborhood and use conversation-driven choices to uncover what’s truly happening in Aaron’s neighborhood. Unsure of who they can turn to, they’ll engage and converse with Aaron’s family and friends, while exploring the neighborhood and the important relationships in Aaron’s life.

To ensure the narrative of We Are Chicago was an accurate depiction of life on the South Side, Aaron’s in-game narrative was created utilizing a myriad of first-person interviews, and personal stories from members of the development team who grew up in neighborhoods like Englewood, one of the most crime and poverty-stricken neighborhoods in Chicago. The game’s writer who has lived on Chicago’s south side the majority of his life, Tony Thornton, translated the first-hand interviews along with his own experiences of raising a family on the south side, directly into the game. It was paramount to the team at Culture Shock Games that the stories in the game be told through an accurate lens.

In addition, Culture Shock Games is incorporating content into the game to benefit two Chicago non-profits organizations, All Stars Project of Chicago, and Reclaim Our Kids, and will be donating a portion of proceeds to support them. Both with missions to help and empower at-risk youth in impoverished or underprivileged communities.

All Stars Project of Chicago works to transform the lives of youth in poor communities by exposing them to strong mentorship and new places and experiences. Reclaim Our Kids, a mentorship program, works to reach out to kids struggling with peer violence, bullying, and gang recruitment.

The instructors that are involved in Reclaim Our Kids have overcome gangs themselves and now work to provide youth with job placement opportunities, get kids back into school, and help them dream again.

We Are Chicago is available today for $15 with a 10 percent launch discount on Steam for PC, Mac and Linux. The game’s story lasts a few hours, and it’s about walking a mile in someone else’s shoes. 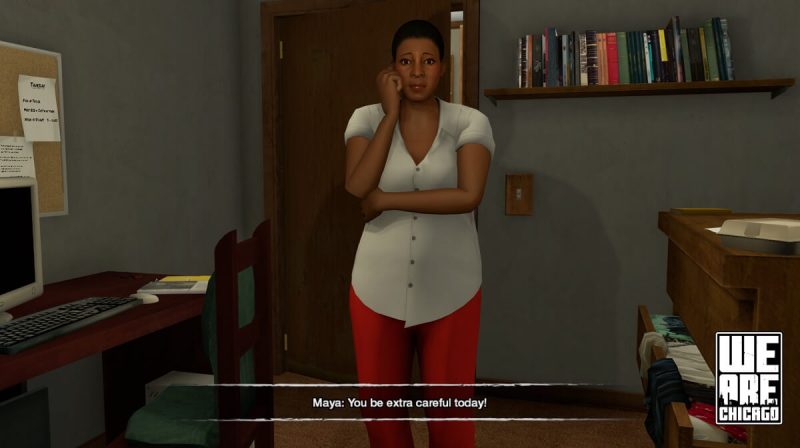 Above: A mother worries about her son in We Are Chicago.

Thornton said he wasn’t sure what to think when he was first approached. He wanted to write movies and had never played video games. But his advisor at a college told him that video games could tell stories too.

The game is driven by conversations, and the player has multiple choices to give as an answer. The player has to figure out the right way to look out for their own interests while supporting their family and friends. In conflicts, you have to figure out how to talk someone down from violence. In that way, the title is modeled after a Telltale game, such as The Walking Dead series.

“We had to say why we thought a game was more impactful than a movie would be,” Block said. “Tony described the neighborhood he grew up in, Englewood, and we built upon that script.”

The neighborhood in the game is fictional, though it bears resemblance to a lot of places in the south and west sides of Chicago.

The south side’s history comes up during some of the dialogue. The game shows the environment where educational and employment opportunities are scarce. Block said he reflected on his own experiences going to the south side as the only white person in a crowd. 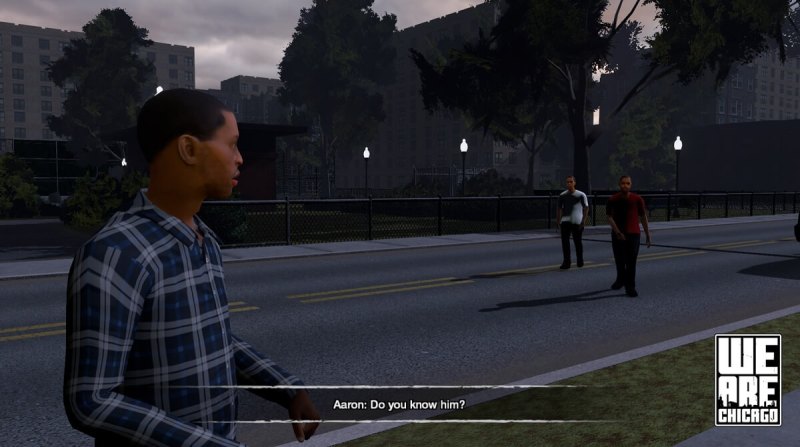 Above: A tense moment in We Are Chicago

“It’s a situation that is so hyper-segregated,” he said. “I understand why a lot of my friends don’t see a reason to go there.”

It wasn’t easy for a team that was mostly white to tell the story of black people. The team had 15 people at its peak. Many were contractors. The lead designer was female, and two of the artists were African American, as was Thornton, the writer. All of the voice actors were also African American.

Block spent hundreds of thousands of dollars making the game, and he didn’t pay himself a salary while it was in the works. The company showed the game at the PAX East and PAX West gamer events, and it received a good reception. Block said he found the process of making the game was “incredibly rewarding” and far more satisfying than the previous mindless fun of Oregon Trail Zombies.

“We are doing our part to make the world a little better,” Block said.

Block said he was glad he went that route. No traditional publisher wanted to publish the game, and he was able to preserve his independence in making it.

Block said the goal was authenticity, and he views the game almost more like a documentary.

“We want to make sure that there are complex characters,” Block said. “We didn’t want an entirely negative depiction, like the never-ending news reports on homicides. We wanted to present characters in more nuanced ways. They deal with crime, but it is not he defining characteristic of their existence.”

As for the name, Block said, “We brainstormed a lot. It came out of this feeling that the city was divided. You don’t go to parts where you didn’t grow up. But we are all Chicago. We should treat each other like we are neighbors.”