The people who create mods for video games should make money from their work. At least, that is still the position of Valve boss Gabe Newell.

Steam does not offer a way for mod developers to directly sell their creations to that PC gaming platform’s millions of users anymore, but it did for a brief time in April 2015. After years on the market, Valve and publisher Bethesda worked together to introduce paid mods for open-world role-playing game The Elder Scrolls V: Skyrim. In response to that new feature, a number of gamers freaked out. They made it clear that they didn’t want to pay for mods. Because the PC platform is so open, gamers had grown accustomed to the idea that they could download a mod from anywhere and install it themselves without having to pay, and the idea that Steam would create a marketplace where people could sell those same mods was too big of a change. And that led to Valve and Bethesda pulling the plug on the idea.

But Newell has never stopped believing that people should receive compensation for creating content that other people value. 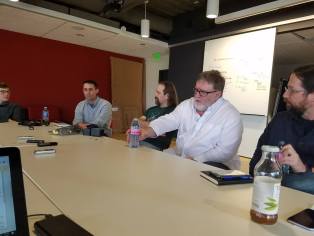 “Mod people create a lot of value, and we think that absolutely they need to be compensated,” Newell explained to a roundtable of media outlets that included GamesBeat. “They’re creating value, and the degree to which they are not being accurately compensated is a bug in the system.”

In justifying his stance on this, Newell explained that paying for mods isn’t about some desire to upend a status quo where mods are free and have been for multiple decades now. Instead, the Valve founder made it clear that this concept is about the fundamental principles that the company built Steam on.

“The view that games are competing with each other is kinda incorrect,” said Newell. “In a lot of ways, nothing helps sell your game like other people building successful games. For people in the VR space, that is super obvious. When somebody else comes out with a popular VR game and your sales get better, it’s super obvious that there are these global [factors lifting up everyone].”

He argues that a popular mod has the same effect where it helps the sales of its base game. But he points out that when a mod creates value, its creator is not getting a fair allocation of the reward. And that throws a wrench into a connected economy where players should vote with their wallet about what they want to see more of. But if a mod creator receives almost no compensation, other creators may not see that as a valuable way to spend their time.

“It’s information flow,” said Newell. “In a sense, you want to have really good signal-to-noise ratios in how the gaming community signals to developers: ‘Yes, do more of that. Or, no, please, don’t release any more of those ever.'”

“It’s also so that others may spot that creating value for gamers is a way of earning, and [they may spot an opportunity to earn compensation by bringing new kinds of valuable experiences to players],” Dota 2 developer Erik Johnson added.

At the same time, Newell admitted that Valve did a poor job of introducing paid mods.

“The Skyrim situation — well, it was a mess,” he said. “It was not the right place to launch that, and we did some ham-fisted things in the way we rolled it out. But the fundamental concept that the gaming community needs to reward the people who are creating value is pretty important.”

Valve now says it needs to figure out a way to do it so that its customers buy into it while also keep mod developers happy because they’re getting a piece of the reward.

I also asked Newell and Johnson if they think Steam would have paid mods by now if they didn’t have the Skyrim blemish in their past.

“I think we would’ve,” said Newell.

“Yeah, but we got a lot of great data out of that,” said Johnson. “It was awful to go through, but it gave us a ton of useful information.”

When it comes to whether or not Valve will put that data to use, well … maybe not quite yet.

“It was a situation of, ‘Oh, that burner is hot! Maybe we should wait a while before we put our hands on that burner again.'”