If you haven’t paid attention, there’s a surprisingly strong genre of browser-based games dubbed .io games. The name comes from the .io extension files, and one big hit is Miniclip’s Agar.io.

Agar.io debuted in April 2015, developed by a single Brazilian developer, Matheus Valadares. It’s a simple browser-based game where you play as a single-cell animal moving around a kind of graph paper environment. You swallow other cells and creatures so you can grow.

The casual game came to Miniclip’s attention, and within a week, everybody at the company was playing it, said Jamie Cason, the executive producer at Miniclip, in a talk at Casual Connect Europe in Berlin. Within a week, the team met Valadares in Lisbon, Portugal, and acquired the publishing rights for the title.

Miniclip, founded in 2001, has about 200 million monthly active users. It releases around 100 games a year. But the company knew it had something special with Agar.io. A few weeks after meeting with Valadares, YouTube sensation PewDiePie, who has tens of millions of followers, picked up the game and started making a series of funny videos playing it. 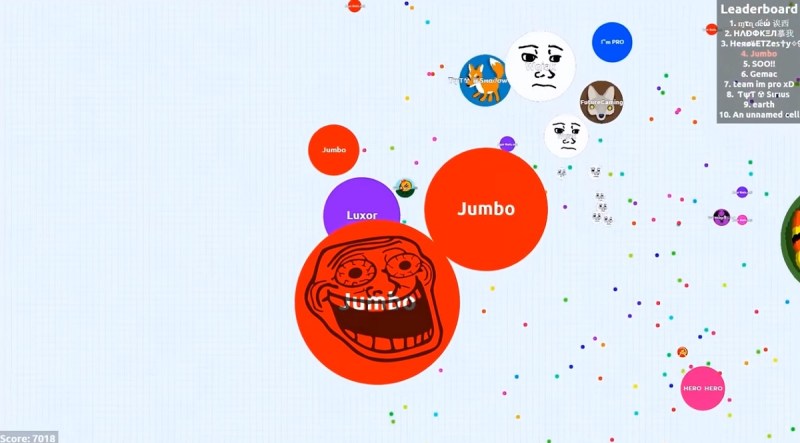 “At that point, it was rocket fuel,” Cason said. “.io games tend to be super accessible. Wherever you are, you can find the time to play the game.”

He added, “There’s also something social about them. Something that makes them take off in a viral way. There was something cultural, with a punky feel that fit with internet memes. It was fun to play, as there was a kind of improvisational theater. Games can become a kind of self-perpetuating cultural phenomena. It gets on a roll and becomes unstoppable.”

If there had only been one hit, then it would hardly have become a real genre. But a whole wave of titles followed, including the hit Slither.io. Developed by Steve Howse, it came out in March 2016, and it became the biggest title yet among the .io games. It has mechanics where tiny objects could kill very large objects.

“It has a Zen-like atmosphere that is part of its wide appeal,” Cason said. “You can go into these worlds and drift away. It’s so much simpler than the world we live in. I love the visual effects.”

Slither.io is getting something like 86 million visits a month on the web. Shortly after its release, a bunch of shooting games came out. The developers had to work to keep the file sizes low and work on making each game unique.

All told, there about 192 million monthly active visits to the .io games, with 85 percent of the traffic going to Slither.io, Agar.io, and a small number of other games. The U.S. represents about a third of all the traffic. Many of the players are 18 to 24 years old.

“These games are big in markets that don’t have a big console market, like Brazil and Russia and Turkey,” Cason said.

Part of the appeal is that the games are competitive multiplayer titles that can be turned into esports. They’re arena-based multiplayer games that represent a real opportunity for developers, Cason said.

Currently, Miniclip is working on new games like the brawler Brutes.io and Squadd.io, a bullet hell game with voxel action figures.

Miniclip has to walk a fine line of making the games commercial without killing their character. When Agar.io started, you could use the username “Nazi.” If you did, your skin would become a swastika. Miniclip decided to take that out because it’s “still too taboo,” Cason said.

“I like things that are subversive as a publisher,” Cason said. “I want them to be entertained and real. That’s the punk thing. Don’t spam people with faceless marketing. We want to encourage that relationship, and that is what people buy into. It feels real and authentic.”