The hype around artificial intelligence/machine learning has reached mythic proportions. Some commentators are calling AI the fourth industrial revolution. Others are calling it the new electricity. And I’m a believer. An incredible amount of money is pouring into companies focused on AI/ML, as it has the potential to revolutionize most, if not all industries. See graph below. 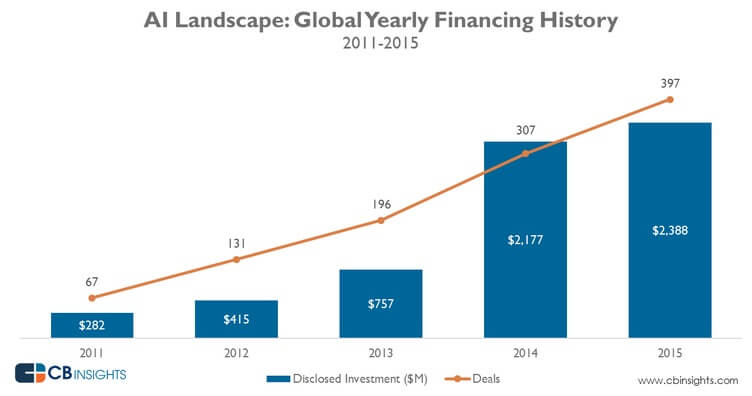 Such a major technology revolution deserves broad and deep financing, potentially justifying the dollars being invested in the space. But I’m concerned that many entrepreneurs are falling into the trap of focusing on the infrastructure of AI – the algorithms and platforms – rather than the applications.

Successful companies usually start by solving a specific customer problem and evolving over time to deliver wider “platforms” based on the solution. What matters is the specific business problems being solved, not the technology itself. But, given how exotice the technology is, it’s easy to get caught up in the algorithms and models and ignore the applications.

So, what makes for a great AI/ML startup? If you try to generalize it, it boils down to a company that is focused on one or more of the following items:

Why you should avoid a horizontal ML platform

Did you notice there isn’t a category for machine learning platforms? Here are a few reasons for it. Web-scale companies like Google and Facebook are not only investing heavily in AI/ML but have adopted the strategy of open sourcing their tools and platforms. Web-scale companies are hard to compete with given their access to immense resources and unique proprietary data sets. If you try to differentiate your startup based on these capabilities, you’ll be at a big disadvantage versus ‘the big guys’.

Additionally, the widely reported shortage of data science talent impacts a customer’s ability to take advantage of platforms and algorithms. This lack of AI expertise means customers do not have the capability to build their own AI/ML, so a startup with a horizontal platform ends up in a professional services role, helping each customer define and accomplish their specific goals.

One other important aspect that entrepreneurs building horizontal AI platforms should think about is the complexity of the go-to-market process. Different verticals may have different buying behaviors. And you may need to approach different verticals via different channels. Of course, before you choose a vertical, you should be sure it promises sufficient scale and growth to support a large business.

Choosing an industry to focus on

If your ML model can be applied to multiple industries, then here are some of the variables you should think through before deciding which one to focus on:

In summary, to make the most of the huge opportunity in AI/ML, you should:

Preeti Rathi is a Principal at Ignition Partners.