While all companies have been media companies since around 2007, every company will be an AI company from 2017 onwards. But artificial intelligence is not enough to bring about a world that is smart, functional, and empathetic. Connected devices that make up the Internet of Things (IoT) will build the physical tech infrastructure, while design thinking is needed to make things valuable and usable for humans. 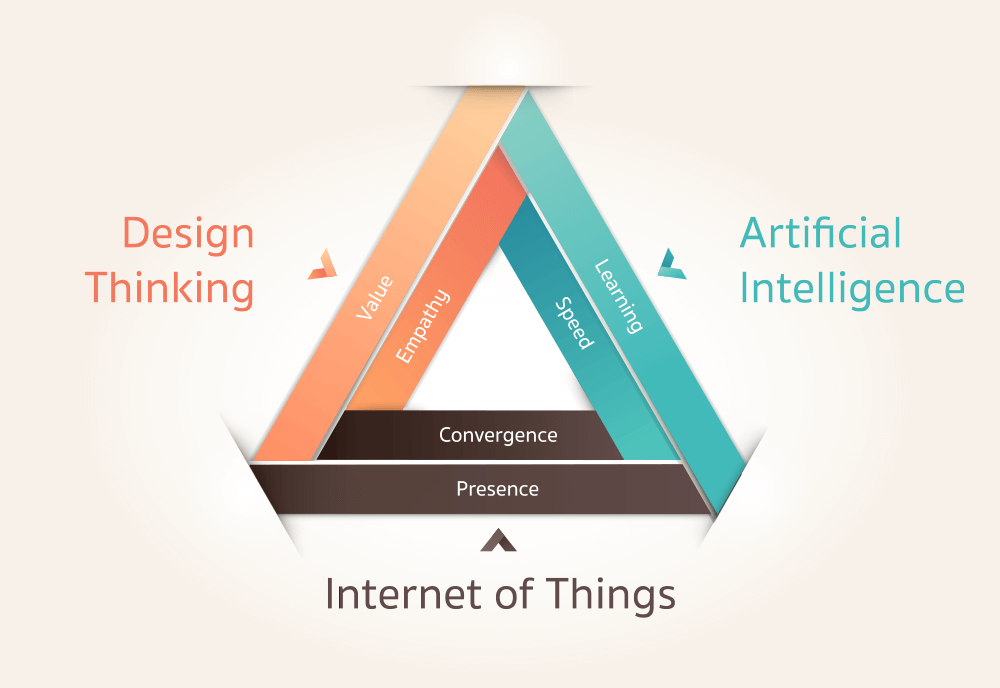 As Chaney Ojinnaka wrote, IoT needs AI. But on the flipside, AI also needs IoT to grow its awareness and understanding of the world. According to Christof Koch, a leading brain researcher at Seattle’s Allen Institute, “Consciousness is a property of matter, like mass or energy.” He says that a strand of grass that turns towards sunlight is more “conscious” than the most advanced computer simulation to date. This is because its information is integrated in a refined physical system that grows and learns as one.

To build machines with a better understanding of the world, we need to build integrated systems that learn through connected sensors and act directly via smart devices. These gadgets expand the physical presence and footprint of AI to help it grow more aware and intelligent. Google’s big bet on mobile and home devices is starting to pay off, while Amazon’s Alexa is already deployed by 7,000 companies in everything from fridges to cars. Each user interaction is now teaching these AIs every moment.

These gadgets provide service and gather data, but also bring additional complexity to the already complicated world. By 2020, the number of connected devices is expected to grow to around 30 billion, according to market analysis firm IHS Markit. Companies need to drive convergence for two major reasons: to reduce the cognitive load on customers, and to streamline design, development, and operations across interfaces. Samsung, for example, aims to connect all their devices through a shared language by 2020.

Platforms like IFTTT (If-This-Then-That) simplify integrating devices and services, letting even non-programmers interweave our connected world. A simple yet very useful example is setting up Alexa to call your phone if you’ve lost it. On the extreme end of convergence is natural conversation, making technology vanish into the background and commanding our machines by simply saying “please” — and “thanks!”

“As long as it works, nobody calls it ‘AI’ anymore,” complained John McCarthy, who coined the term in 1956. Indeed, we already have things that people would certainly have called artificially intelligent just a few decades back. Most of the current examples are based on machine learning.

With machine learning, we can discover unforeseen connections and create unprecedentedly detailed and accurate models and predictions. Google has learned to magically discern what we want from the first word we type. And IBM is now building macroscopes that learn in infinite detail how massive systems, from cities to natural ecosystems, work.

Machine learning thrives with data sets that are broad and long, which is why large companies have an edge in AI and IoT over startups. And it can shine a light on inactive, “dark” data: old databases and images, as well as hidden relationships and meanings that have been impractical or impossible to process thus far. As dark data is predicted to increase from 80 percent to 93 percent of all data by 2020, this capability is ever more important.

In addition to being a learner, AI is an accelerator. Working without human intervention or with little oversight, artificially intelligent agents can make decisions and deliver experiences in a split second, for both internal and external users. As long as checks, balances, and trust are established, this can accelerate operations by orders of magnitude.

And AI can quicken solutions development, too. During 2017, Amazon, Microsoft, IBM, Google, Samsung, and Salesforce will all roll out more industry-specific, pre-customized kits that take development speeds to new levels. These and other platforms are already making intelligent experiences easier to build, meaning tighter competition for everyone. This is where design thinking comes in.

People increasingly demand access to value instead of putting down money for big purchases that they might not even use much. Cars, for one, lie idle around 95 percent of the time. Ida Auken, a member of Denmark’s parliament made a pointed nod to this shift in her article on the society of 2030: “I own nothing, have no privacy, and life has never been better.”

And designers don’t rely only on rational projections. They make great efforts to account for human quirks, weirdness, and counterintuitive behavior. They dream, test, break, and iterate things fast, with direct feedback on tangible outputs. This is an ideal method for exploring solution spaces in the still emerging and ambiguous field of smart services and devices.

As social innovation designer Sven Newman puts it, “The greatest competitor IOT companies face is whatever consumers are currently doing without IOT.” Getting people to shift behaviors is hard, and knowing key success and failure factors as early as possible is critical. Scott A. Nelson and Paul Metaxatos point out that IoT also needs design on an ongoing basis. They note that “recurring revenue demands a recurring customer experience.” Losing customers while delivering value-as-a-service is worse than slow sales, because value is destroyed after acquisition costs are sunk.

Basic AI capability will become commoditized, and IoT platform wars will subside as standards are set, but value will never become dated. The companies that will reap the rewards of our intelligent future are those that put design thinking at the core, and expand this capability with the required skills in both intelligent software and smart devices. Google already advocates design sprints as a central way of working. IBM has moved from B2B to B2I (business to individual) and gone from 7 to 300 design teams in three years. As Dave Evans, CEO of Stringify, puts it, “Technology needs to solve real problems, and if it doesn’t solve real problems in the real world, it’s probably a gimmick and will die on the vine.”