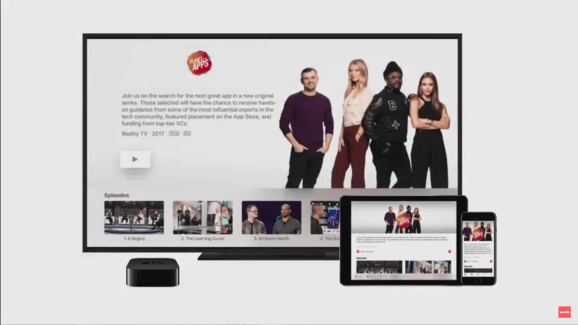 Planet of the Apps, coming this spring.

Cue, who had at his side the show’s producer, Ben Silverman, and also, toward the end, Carpool Karaoke producer Ben Winston, brought with him clips from both of the shows and then fielded several questions about why they fit into Apple Music and Apple, more generally.

Speaking strictly in terms of genre, it mixes reality show with game show. But, as Cue explained, there’s a twist: People will be able to try out the apps features on the show and also learn more about the people behind them.

“It will have a linear component, so you can typically watch, but as Ben said, there’s a lot of things that we shoot that don’t end up on air in a linear format, and if you want to go deeper on a developer or a particular thing that’s happening, we can do that,” Cue said.

This — and Carpool Karaoke, which, as Winston explained, differs in certain aspects from the segment on The Late Late Show with James Corden — amounts to the type of innovation that Apple wants to front-load into Apple’s push into video content production.

Kafka asked Cue why Apple doesn’t just spend some of its money buying a company that makes original video content, like Netflix.

“We might be better buying somebody or doing that, but that’s not what we’re trying to do,” Cue said. “We are trying to do something that’s unique, that takes advantage of our platform and then really brings culture to it, and — right now we think we could do that with partners like Ben. We don’t see that anywhere else.”

And he said buying a bunch of existing shows isn’t necessarily in the spirit of what Apple wants to do. “We do add certain value,” he said. Netflix, meanwhile, is making “the most traditional shows in the history of media,” Silverman said.

Silverman said many networks were interested in the idea that he, will.i.am, and Howard Owens were pitching, but Apple seemed like the only acceptable partner, given that the show was about apps and because it offers a prize — downloads — which is ultimately, Silverman said, “how developers get excited.”

Cue acknowledged that, no, the show isn’t completely about music, even though it will appear inside Apple Music — but then again, he said, some of MTV’s shows weren’t completely about music, either. He said Apple Music is really “about culture.” As Silverman pointed out, apps are solidly a part of culture at this point, eight years after Apple launched the App Store.

The show will be like some of Apple Music’s music and music video releases in the sense that it will be exclusive. But generally speaking, Cue said, “exclusives are promotions.” Ultimately, exclusives draw people in and keep users engaged, but they are not the true core of the service.

And like Apple Music’s radio and playlist services, “Planet of the Apps” will not have ads. Cue said he didn’t think ads are “what our customers are asking for.”

That said, there are ads in the App Store. Cue said they’re leading to more app downloads. And, he added, App Store Search Ads aren’t unrelated — they’re for apps that are relevant to people’s searches.

Cue also talked briefly about podcasts, one of the longest-standing features of iTunes, which preceded Apple Music. “We’re working on new features for podcasts,” he said.

Cue said Apple is also trying out things in Apple News in the context of cutting down on the spread of fake news. “We all have a responsibility for it,” Cue said.

Kafka brought up the rise of Amazon’s Alexa virtual assistant and the Amazon Echo product line, and immediately the smile disappeared from Cue’s face. He said Apple has long believed in the greatness of voice as a user interface — see Siri. Using your voice means more quickly setting an alarm and finding out about the next event on your calendar, he said. But “those are all things on your device that you carry with you all the time,” he noted. In other words, iOS devices rule.

During the question and answer session, Recode’s Kurt Wagner asked Cue about virtual reality and augmented reality, which Apple chief executive Tim Cook has spoken up about several times in the past several months. “Talking about future products would not be good,” Cue said.