Half-Life 3 is a mythological beast. Most people know it’s not real, but you’ll never convince a handful of dedicated investigators who pour over every blurry photo and alleged Gabe Newell footprints found in the woods of the Pacific Northwest. 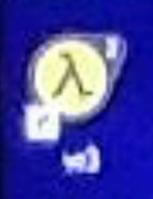 Above: I don’t know. Looks like Bigfoot to me.

Now, Valve is confirming that some of its employees enjoy perpetuating the occasional Half-Life 3 hoax. For instance, in the image above, you can see what looks like a Half-Life 3 logo on a Windows machine running a Vive demo. The logo has either “VR3” or “W3” as its label, and — as you would expect — this news drove some people in the Half-Life community wild. But when asked about this image and that logo, Valve had a predictable explanation.

“It’s news to us that the picture is out, but it’s also news that this icon is on the screen,” Valve communications specialist Greg Coomer told a roundtable of reporters last week. “Honestly, those icons have floated around this office for quite a while. None of us are going to be able to tell you what that is or why that’s there.”

But then Valve founder Gabe Newell added his own take on the situation.

“Some of the more childish members of our company have worn Half-Life 3 T-shirts to GDC,” Newell said.

Clearly, Newell also believes that the logo is another example of that childishness, but the company did stop short of saying that it wasn’t Half-Life 3.

Valve is making three VR games. These are not experiments, but the company did not mention any specifics about the projects. When asked about references to Half-Life 3 in code for the Source 2 engine, Valve stopped short of making any definitive claims.

“I’m not going to say anything about the three specific titles,” said Newell.

Take that as you will, but I wouldn’t get your hopes up.