Microsoft’s next big exclusive on the Xbox One and Windows is Halo Wars 2, which debuts on February 21. I’ve gotten an early look at the game, and here are some of my impressions.

I’m gradually getting accustomed to playing on a console, as real-time strategy games are truly best played on a PC with a keyboard and mouse. Microsoft is serious about making this game work on the console and expanding the market for RTS titles, and so it enlisted developer The Creative Assembly to build Halo Wars 2.

The Creative Assembly, owned by Sega, has made Total War RTS games on the PC for years, but this Xbox One title required the developer to rethink the gameplay and controls. 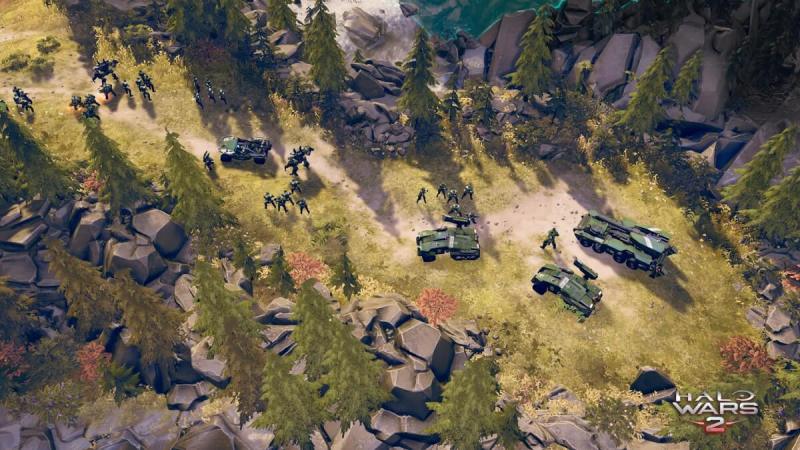 Above: Halo Wars 2 follows the crew of the UNSC capital ship Spirit of Fire awake decades after they were declared lost.

The question, Nicholson said, was how to make the game more accessible but also keep the depth that leads to long gameplay. The original Halo Wars, which came out in 2009, had a good control scheme on a controller. You could press the right bumper to select local units or those that are within your field of view. If you hold the bumper down, you can select all of your units on the map.

That was easy enough. But that game had a fairly limited field of view and you couldn’t get that many units on the screen at once. With Halo Wars 2, the maps are much more expansive and you can get 80 soldiers on the screen. Of course, some of those units are a part of groups, so you can’t actually control all 80 units at once, as you can in typical PC RTS games. In the video below, you’ll see that I only have seven groups under control, but it notes there are 31 soldiers in those groups. So naturally, some compromises had to be made to make the console game more accessible and easier to control.

Still, The Creative Assembly added some nice touches, like shortcuts on the D-pad, which are customizable. You can add units to the D-pad directional controls and easily switch to them. That takes a lot of brain cycles to remember, but it could be worth it for the time it saves in a pitched battle. 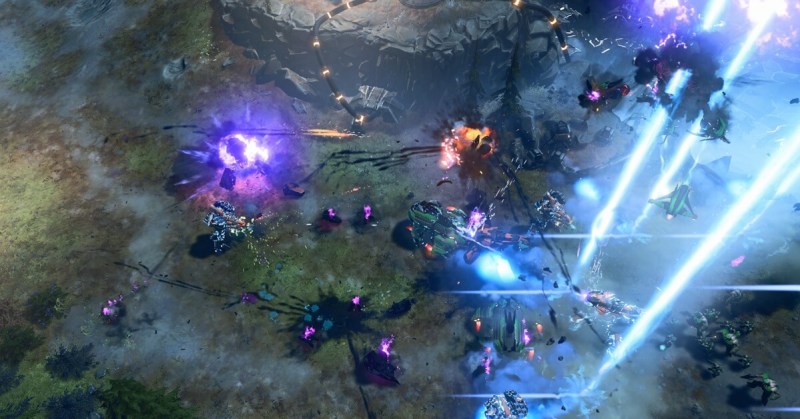 Above: Battle scene in Halo Wars 2.

One of the things that I like about this title is that it has an original Halo universe story. At the start of the game, crew members of the UNSC capital ship Spirit of Fire awake decades after they were declared lost. They are above an ancient Forerunner haven known as the Ark. The captain and his crew have to face off against the Banished, a faction led by an unbeatable Brute warrior named Atriox. You have to develop your troops and your own leaders to take on Atriox’s forces, who seem to be everywhere at once.

The first mission includes a tutorial that teaches you how to play. I had to get used to moving around the screen without clicking on a mini map with a mouse. But I managed to get around fast enough. It helps to be able to select all of the available local units with a single button push (by hitting the right bumper once). Then you can move the cursor to a spot and hit X to either move the units there or make them attack that position.

The single player campaign throws enemies at you piecemeal as you explore the area around you. Rather than just start a giant battle, you have to complete missions with limited numbers of forces at first. I played the mission One Three Zero below, where a single Spartan super soldier has to liberate a bunch of prisoners. The campaign’s missions are concentrated and intense. When you get into a close combat situation, you have to make sure you outgun the enemy.

But you can also invoke your leader’s powers, getting help from the commander up in the UNSC capital ship. You can use some of your resources to issue commands that can have a huge tactical effect. For instance, you can heal all of the troops in a particular area for a short time. That could give them enough stamina to overcome industry forces or break into a fort.

You can also rain down missiles or disrupt the enemy’s electronic communications. I found I had to keep a close eye on resources while I did this, though, because it can use a lot of your available resources when you invoke the leader powers.

For the most part, I played fast enough to keep ahead of the enemy. My usual strategy was to mix a lot of troops together in a big group and send them at the opposing forces.

It isn’t easy to tell which soldiers are in a pack that you have selected, but the user interface shows you how many you have of each type in a battle group. I used this user interface to tell me how many units I had to train of various types.

The battle chatter is dramatic and also useful.

“Oh sure, shell me from a distance,” yells one UNSC soldier. That’s a tip that you’re being shelled by artillery that is out of range of your guns, and you should do something about it.

The soldiers also shout at you, “I’m under fire from ground troops.” Again, that’s a useful cue that you have to take action.

One crucial test I haven’t tried yet with this game. I can beat the single-player A.I., even though it has given me a hard time, like in the mission dubbed The Cartographer. But the A.I. can’t simulate playing against another human. Can I beat someone in unsupervised multiplayer? I’ll find out soon enough.

Overall, I’m enjoying myself and the story. I was pleasantly surprised that I had to play The Cartographer mission more than once to actually succeed. I’m anxious to get further in the campaign.