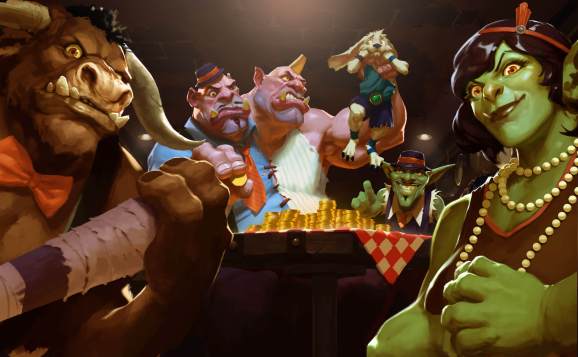 The Grimy Goons gang is a faction with hunter, paladin and warrior cards in Hearthstone's Mean Streets of Gadgetzan expansion.

Shaman’s reign of terror on Hearthstone may end even before the beginning of the next year of Standard.

Blizzard announced today that it is changing some cards in a patch coming near the end of February. Hearthstone is a free-to-play digital card game available for PC and mobile. Two problem cards, the neutral pirate Small-Time Buccaneer and Shaman weapon Spirit Claws, will suffer nerfs (a term used when a developer deliberately weakens something). Hearthstone is the leader in the digital card game market, earning $394.6 million in revenue in 2016. Changes like these are important to keep its large (and quite vocal) community happy and other playstyle competitive.

Blizzard is also changing the way players have to climb up each month’s ranked ladder. Soon, you will no longer be able to drop below Rank 15, 10, or 5. This will help players earn higher ranks each month, since a losing streak can’t have as negative an effect on their position.

Many fans have complained that the game has too many powerful 1-mana cards, which has encouraged players to make easy-to-play and fast-paced decks that can dominate Hearthstone. Blizzard told us that it wants to pull back on 1-drops in the future. But for now, these nerfs will have the largest impact on the Shaman class.

Small-Time Buccaneer’s health has gone from 2 to 1. That tiny change is a big deal, since now other players can remove him more easily.

“The combination of Small-Time Buccaneer and Patches the Pirate has been showing up too often in the meta,” Blizzard noted in a forum post going over the nerfs. “Weapon-utilizing classes have been heavily utilizing this combination of cards, especially Shaman, and we’d like to see more diversity in the meta overall. Small-Time Buccaneer’s Health will be reduced to 1 to make it easier for additional classes to remove from the board.”

The Spirit Claws weapon, meanwhile, will have its cost increased from 1 mana to 2. This will make a less aggressive tool during the first couple turns of the game.

While Small-Time Buccaneer is from the latest expansion, Mean Streets of Gadgetzan, Spirit Claws comes from the set before it, One Night in Karazhan. It has helped Shaman establish itself as one of (if not the) strongest Hearthstone classes.

Hearthstone’s next expansion will bring with it a new Standard cycle, meaning that cards from older expansions will no longer be allowed in the game’s Standard mode. Mean Streets of Gadgetzan and One Night in Karazhan are both new enough that they should remain part of Standard, which is why Blizzard is changing them even with the cycle change on the horizon.