High costs and the lack of government subsidies or incentives make the U.S. more costly compared to regions where governments off that. Canada pours $4 billion a year in subsidies into its industries, including games. And it has attractive tax breaks that make the cost per employee about 25 percent of the U.S.

Canada, however, can’t beat the U.S. in sheer population. To some perspective on the comparison, the state of Washington alone has 423 game companies with 20,800 employees.

Game industries can’t be taken for granted. Sometimes they fizzle, due to war, layoffs, or acquisitions. 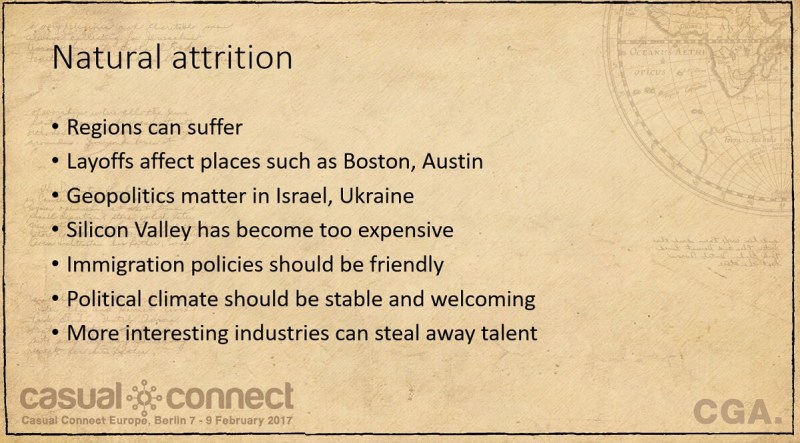 Above: Reasons why a game region can fizzle. 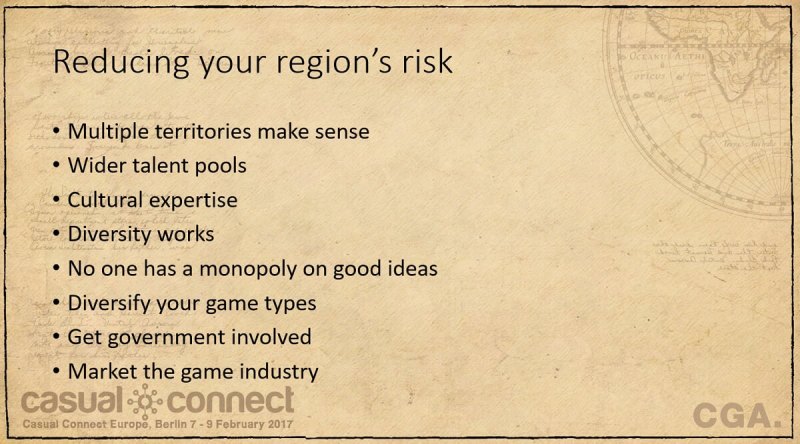 Above: Reducing your game region’s risks.

But governments don’t have to be helpless. There are things you can do to reduce the region’s risk of losing its game industry. I’ve listed some of those ideas above. 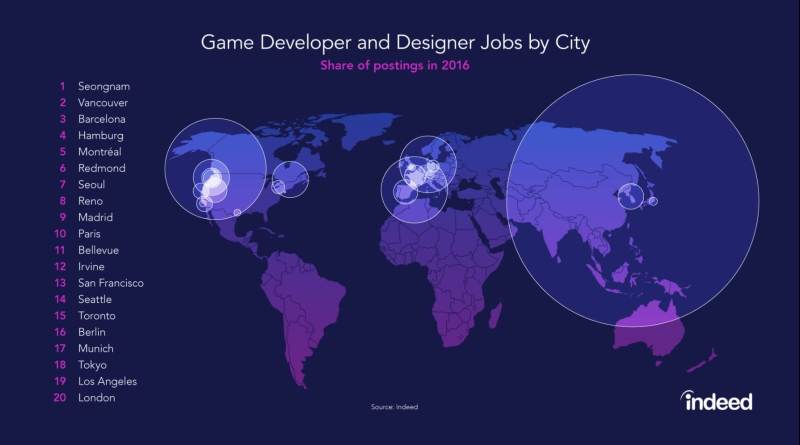 Above: The top cities in the world for game job postings.

This was another interesting chart from Indeed.com, where the number one city in the world – where you should all move right now – is Seongnam, South Korea. They have the most jobs posted out of any city in the world. Again, looking at where San Francisco is, it’s number 13 on the list. Bellevue, Washington has more jobs open than Silicon Valley. But again, this makes me ask more questions. Why is this? I’d ask the whole game industry to help us figure out the answers. 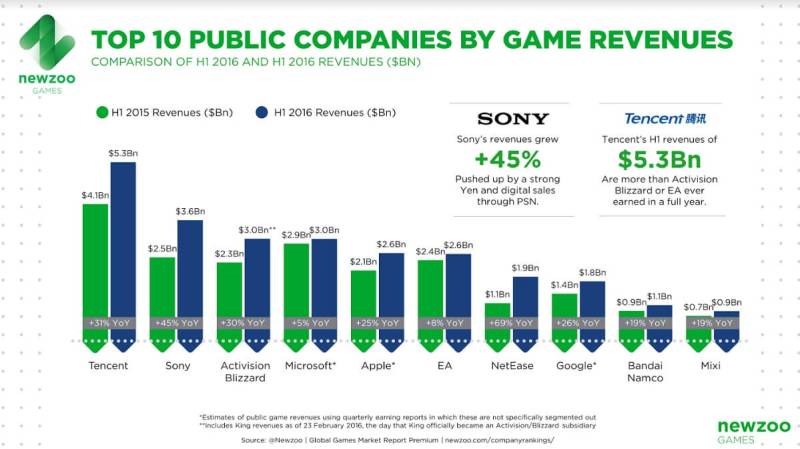 Above: The top 10 public game companies.

It was eye-opening to see who the largest public game companies are. Tencent, from China, is the largest game company in the world. This is what I like about the games business. Everything is weird and unpredictable. Supercell, with 250 employees now, is valued at $10 billion, based on a real transaction. It’s worth more than Ubisoft, with 10,000 employees, valued at $3.7 billion. Ubisoft maybe isn’t as capital efficient as they might hope.

A lot of the strongest leaders in the game industry are platform owners. Mixi got on the list on the strength of a single mobile game. In the first half of 2016 we saw a little bit of change, but not much.

Where the jobs will be 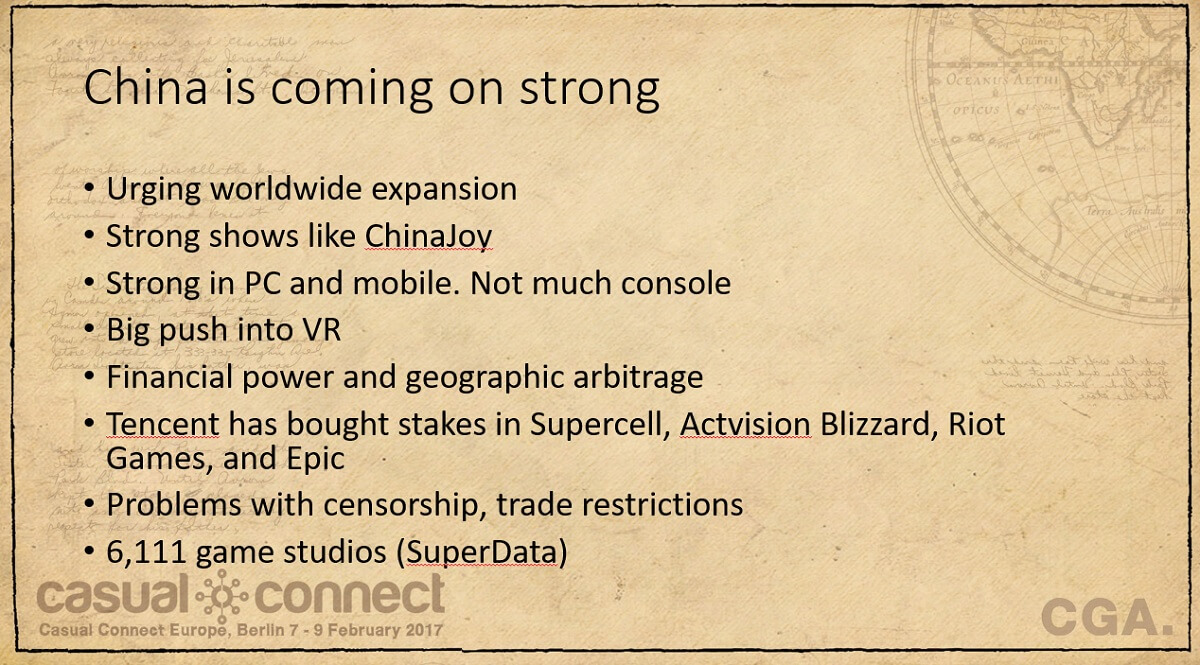 Above: China’s regional strength in games.

China is strong, but ultimately you run into the problem of government censorship. It’s not necessarily the best place in the world for creative professionals. China is strong in mobile and PC games, but not so much in console. It is making a huge push into VR via its Internet cafes. Tencent has bought stakes in Supercell, Activision Blizzard, Riot Games, Miniclip, Epic, and Glu Mobile.

Israel has a very interesting history. It started in online gambling, but that expertise served them very well with the rise of social casino games. The largest social casino game maker, Playtika, grew to well over 1,000 employees, and was then acquired by a Chinese company for $4 billion.

M&A activity can have a very big effect on what happens to your region and where the strength of the game economy is. If someone from another region acquires a company, they have different interests than necessarily keeping jobs in your city or your country.

85 percent of Spain’s 480 companies didn’t exist 10 years ago. With that number, it’s not a surprise that they recently had a big exit with Social Point getting acquired by Take-Two Interactive for more than $250 million.

Things can change. In Israel and Ukraine, we found out that geopolitics can matter. When countries go to war, that’s not good for the game industry. We all learned that playing Civilization. If you go to war, it’s rarely good for your empire. Austin had a vulnerability in that it was especially dependent on the MMO industry. They had lots of MMO companies, and when the smaller MMOs were all killed off by World of Warcraft, those companies disappeared. 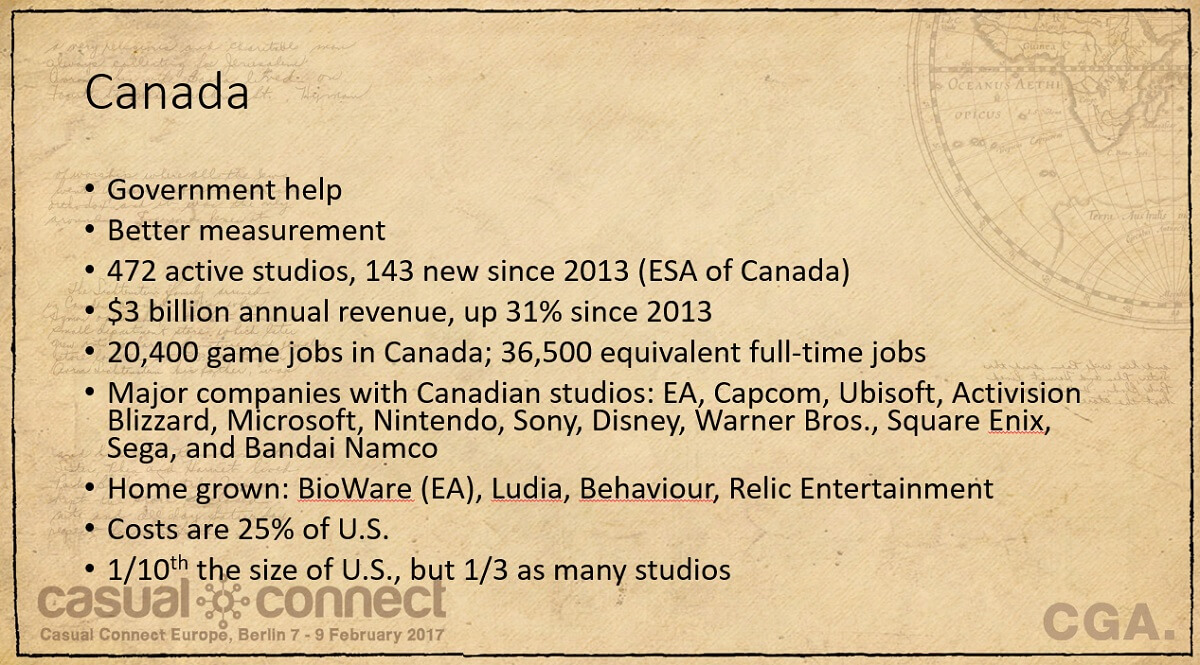 Above: Canada’s advantages in games.

Immigration policy in the U.S. is not going to give the industry an advantage over the next four years. Canada is strategizing right now with regard to taking advantage of Donald Trump, and they’ll probably have a lot of success. The game industry should welcome people and welcome games. We’ve seen governments obsess over violence in games, how to regulate games, how to keep them out of the hands of children. We see some regions where people grow up playing games and some regions where they don’t. India didn’t have a history of people playing games, and they’re not as far up the food chain in the industry today.

The idea of a food chain is appropriate as far as how countries and regions can strategize about how to grow in the future, how to move up. You can start with game testing at the very bottom. At the top of the chain, I guess, is Grand Theft Auto, or something along those lines. Your industry should level up, just as game developers level up, to stay ahead of a commodity war at the bottom of the food chain.