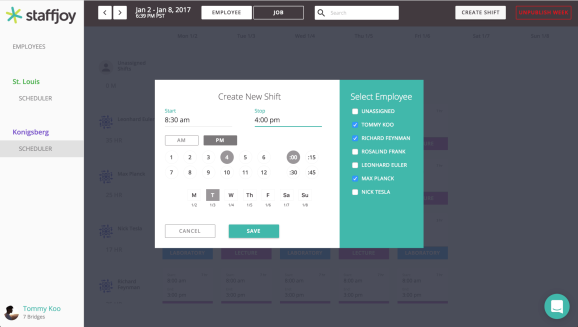 More than a year ago, Staffjoy launched with a mission to help small businesses improve scheduling for hourly workers. Today the company announced that its dream is no longer feasible and it will be shutting down on March 15. It is no longer accepting new accounts and has open-sourced its code. Staffjoy said that it plans to return $1 million in cash to its investors.

The company is a byproduct of a scheduling algorithm project founders Andrew Hess and Philip Thomas developed while attending Washington University at St. Louis. When it officially launched in January, Staffjoy saw an uptick in usage, but that turned out to be mainly from people who just wanted to try it out. The problem of getting users to convert into paying customers remained. “After 18 months of effort, the product has strayed away from our original vision, and we have failed to achieve product/market fit,” explained Thomas in a Medium post.

He admits that there was discussion about pivoting Staffjoy to a new concept in a different space, even with new cofounders, but it “didn’t seem fair to investors or future employees.” The final result of these discussions is the decision to shutter the company.

The web app Staffjoy offered small businesses promised to help manage staffing and scheduling and included the ability to send text messages to workers about their shifts. Workers would save time by not having to go into the business to find their weekly schedules — and they could be notified on their phone without needing to download the app.

“Our user research shows that the reason so many businesses use paper or spreadsheets to schedule is that workers don’t use smartphones or even email. We found text messaging to be the best way to engage with employees,” Thomas once told VentureBeat in a statement. “In fact, we found that many managers screenshot existing scheduling apps and text the schedule to their team.”

Customers have until March 15 to retrieve data they have stored on Staffjoy. After that date, all user data will be deleted.