How do you re-engage with users?

Our bot, called Epytom, strips away the daily headache of having to choose what to wear. Through micro-learning, you gradually take your style to the next level; next thing you know, the amount of attention and compliments you get double. Epytom is geared toward casual, everyday use. Our third-week retention is 57 percent.

We didn’t get here through some magic formula. Instead, we tested rigorously. Today, I’d like to share with the bot community a few tricks for increasing user retention.

1. How many push notifications does your bot send?

Somehow, in Messenger and other bot platforms, this issue flies under the radar, but you can and should influence it. What works for us is a single silent notification with valuable info front and center. This alone brought our churn by cohort down 2 to 3 percent on the second day. In contrast, Poncho sends one notification with sound, while Greatist and ParentHub bots send five notifications at once.

2. What shows up in preview?

When sending broadcasts, preview is as important as the subject line for emails. One bot we know finishes every day with the same phrase: “Down to try this today?” Sure, it’s clickable once, but not every day. Poncho, for example, sends a joke instead of the weather forecast in that message. This may drive their retention.

At Epytom, we create a series of preview messages weekly to hook the user and spark their curiosity to open the message. This allowed up to increase open rate by 4 to 5 percent.

Adding the user’s name to the final broadcast message that appears in the preview is another way to drive open rate up 0.5 to 1 percent because it immediately catches their attention. But resist doing it every time or the effect might wear off.

Clearly define and monitor broadcast open rate as it applies to your bot. It may be the user performing an action: sending a message, for example, or just reading the message. In the case of Poncho, it’s most likely message read because no additional action is required to receive the expected information. In the case of Epytom, it’s the action performed — precisely, tapping the “See Pictures” button — because without doing that, the user doesn’t get their information on what to wear and how to style it.

5. Bot analytics system allows you to pull all key KPIs

If your bot is data-driven, you most likely spent time setting up your analytics, probably connecting a Google Analytics account and setting up an automated feed into a Google Sheet. But there is an easier way: the less common bot analytics system AppMetrica (powered by Chatfuel) allows you to pull all key KPIs. Let’s say we want to know the return rate of the users who shared their location to receive looks for their weather. We can then use AppMetrica to compare it against the cohort of users who took a lifestyle quiz.

6. Send notifications only if they are being opened

An effective way to decrease churn is to continue sending notifications only if they are being opened. If not, it’s best to go silent and then follow up with a special reactivation message. There is nothing worse for your bot than being blocked when a user can’t figure out how to unsubscribe. And there is nothing better than to value your content and only offer it to those who value it as much. Explicitly letting users know that they will continue getting our messages for only as long as they keep reading them increases conversion into subscriptions during onboarding by 8 percent.

Speaking of onboarding: We all muddle through information overload, so disrespecting users’ personal space means shooting yourself in the foot. Getting to know each other before committing (aka subscribing to notifications) is better than a one-night stand (aka quick subscription with immediate resentment). In the end, why does a bot need users — to boast about a pretty number in articles and presentations or to build long-term relationships? We used to subscribe on the second or third step, but our retention grew significantly when we delayed it until step 6 (we’re still A/B testing, though).

I remember dreaming of another episode at the closing credits of the final episode of Dynasty. I even remember how during perestroika in Russia my mother’s friend bought a VHS tape with three episodes that hadn’t been released at home yet, and what a holiday it was! So, if you want your users to crave the next “episode” as much, you need to strategize for them like they were a series (if the content allows).

…it’s a share! Did your users send thank yous or grateful messages? There is no better moment to suggest they share the bot with friends or even rate it.

10. Blog about more than bots

Blog about the issues close to your audience. I never forgot how I conceived Epytom, being a new mom to two babies with too much insider information on the inner workings on the fashion industry to ever fall for its tricks again. I was our first user: a mother and entrepreneur who wanted to look good despite it all and with minimum effort. So, we created a Medium publication for “mompreneurs” to share tricks and stories of killing it at the work, playroom, and style game.

Anastasia Sartan is the CEO and cofounder of Epytom, a stylist bot. 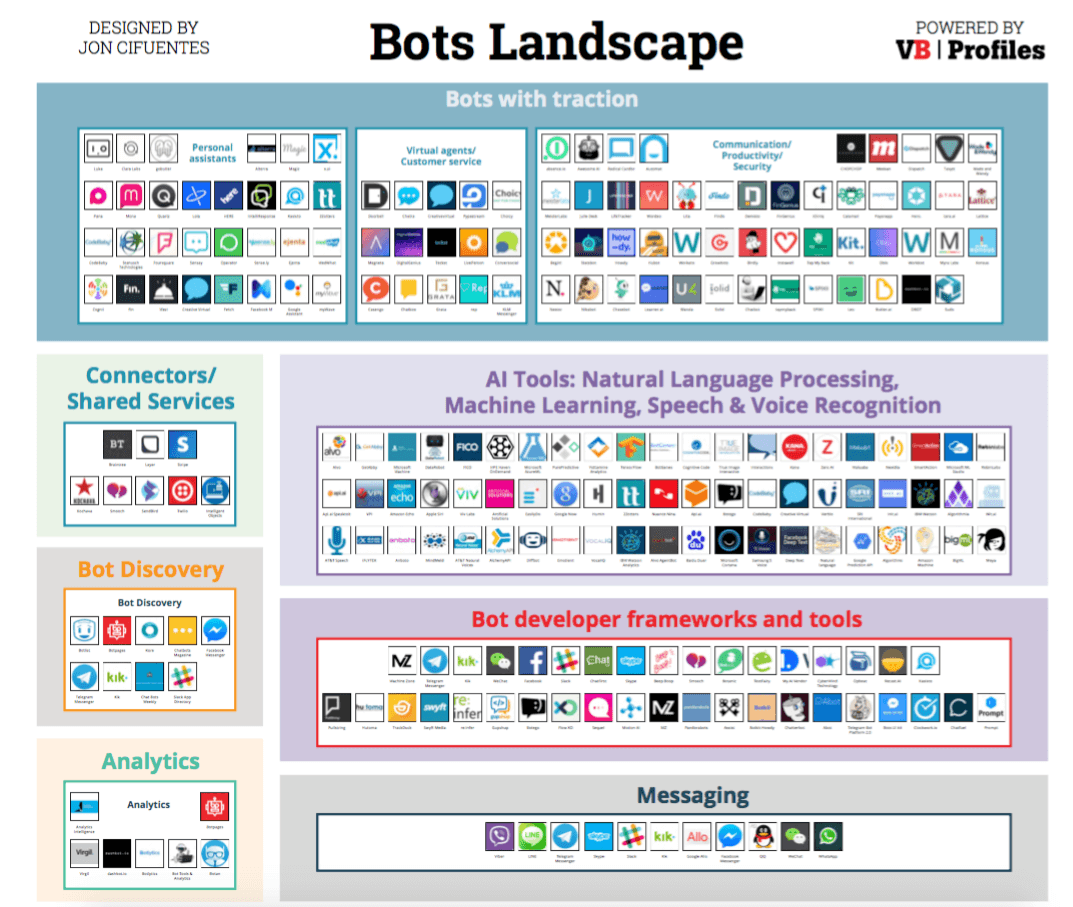 Above: VB Profiles Chatbots Landscape. (Disclosure: VB Profiles is a cooperative effort between VentureBeat and Spoke Intelligence.) This article is part of our bots landscape series. You can download a high resolution version of the landscape featuring 197 companies by clicking the image.