The title is one more example of a big game company — Plarium has had more than 250 million downloads — and a Hollywood studio getting together to publish a title in the $40 billion mobile game industry, where getting discovered is a big problem.

The game features a creative mix of match-3 puzzles, mini-games, and character collection for players of all ages. The game is based on characters from the 2011 20th Century Fox film, Rio. Those characters — Blu, Nico, Jewel, Roberto, Gabi, Luiz, Pedro, Rafael, and Bia — last appeared on mobile in Angry Birds Rio.

“Blu is back,” said Rick Phillips, EVP of Fox Interactive, in a statement. “We’re excited to embark on this new Rio adventure with our trusted partners at Plarium. This new game promises to create a fun twist on puzzle games with the vivid colors and characters of Rio.” 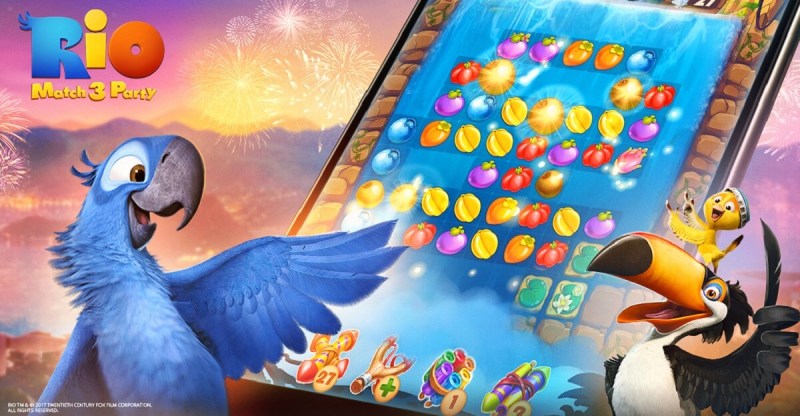 Above: Rio characters come back to mobile with Plarium’s Match 3 game.

Rio (2011) and Rio 2 (2014) were animated movies that followed the adventures of Blu, a rare Blue Spix’s Macaw, as he makes his way through Rio de Janeiro and the jungles of the Amazon. The new Rio mobile game will allow fans to play through these beautiful and iconic locations.

“Through our partnership with Fox, we’re bringing a beloved animated franchise to all the fans around the globe in a completely new and compelling way,” said Avi Shalel, CEO at Plarium, in a statement. “The game will offer a true AAA mobile game experience that will push the limits of visual fidelity, while emphasizing the authenticity of the characters that made Rio a hit in the first place.”

This is the second partnership between Plarium and Twentieth Century Fox. Plarium, based in Israel and founded in 2009, has more than 1,000 employees.