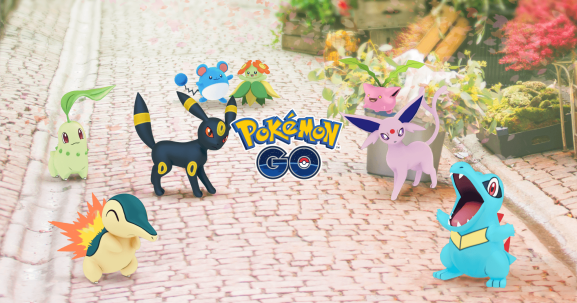 Pokémon Go isn't far from its first anniversary, and it's finally getting a new batch of non-egg pocket monsters.

Nothing gold can stay, Ponyboy … well, nothing Gold (or Silver) can stay away from Pokémon Go, that is.

The Google Maps-powered monster-catching location game is getting 80 new creatures, developer Niantic has revealed directly to GamesBeat. This means that dedicated players will now have a chance to catch Johto region starters like Chikorita, Cyndaquil, Totodile beginning later this week. Unlike the previously added Pokémon, you will not have to hatch these monsters from eggs. Instead, you will find them in the wild by walking around your neighborhood and beyond.

Beyond the new Pokémon, Niantic is also adding a number of other major new features. Here’s what you can expect:

“Today is a momentous occasion for our team here at Niantic, which has been hard at work to deliver these additional Pokémon and build upon the encounter and capture mechanics for our passionate global community of Trainers playing Pokémon Go,” Niantic found and chief executive officer John Hanke said in a statement. “Pokémon Go is a live experience that we’ll be continuing to support and evolve in new and interesting ways for years to come with new gameplay features, in-game and live events, more Pokémon to discover, and much more.”

This is the biggest update yet for Pokémon Go, which debuted in the summer. That launch sparked fan pandamonium, and it helped the game shoot to the top of the download and grossing charts in the $36.6 billion mobile-gaming industry. It has since fallen back to Earth, but it is still regularly in the top-10 highest-grossing apps on iOS and Android. And it’s almost a guarantee that this new influx of content — especially the new creatures — will reignite fan interest and spending.

“With Pokémon Go, The Pokémon Company endeavored to create a compelling game based on the concept of encountering and catching Pokémon in the real world,” The Pokémon Company International consumer marketing director J.C. Smith said in a statement. “The amazing response to Pokémon Go by millions of existing and new Pokémon fans around the world is remarkable. We’re thrilled to keep the adventure going by welcoming these Pokémon to this engaging new way of experiencing the fun of the Pokémon brand.”