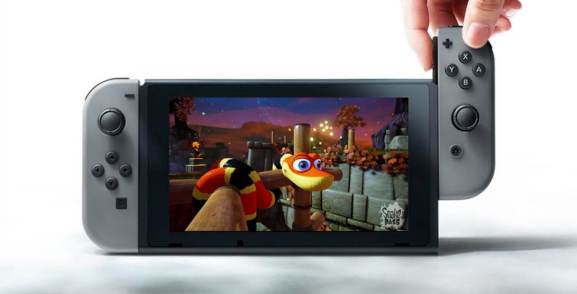 Snake Pass is a Switch game that runs on Epic's Unreal Engine.

One of the industry’s most popular game-making tools is getting a wave of improvements as well as support for a major upcoming console.

Epic Games is updating its Unreal Engine toolkit to version 4.15. This is a toolkit that many developers use to build 3D games on consoles, PC, and mobile platforms. Games that use Unreal include Oceanhorn 2 for iOS, Xbox One’s Gears of War 4, and virtual reality experiment ShowdownVR. But as part of the 4.15 update, Unreal is also getting native support for Nintendo’s upcoming hybrid handheld/home Switch console. Snake Pass, a 3D puzzler, runs on Unreal and is coming to Switch on March 29.

Other major additions to Unreal as part of the 4.15 update includes access to GPS data on iOS and Android, better streaming audio and notifications on Apple’s mobile operating system, and support for HDR displays. Both HDR and native Switch support are in an experimental state.

Above: A simulated example of support for the expanded color palette of HDR.

Beyond HDR and Switch support, Unreal Engine 4.15 includes a total of 79 improvements submitted by Epic’s development community. The company gets these submissions from developers working on the completely free-to-play Unreal Tournament shooter on the Epic Games Launcher platform. Anyone can buy and play that game, and it is completely without microtransactions. Instead of using the game to generate revenue, Epic is using it to enable its community to experiment with ideas that could lead directly to updates in the Unreal Engine.

And now, those improvements will roll out to other PC games as well as Xbox One, PlayStation 4, iPhone, and even Nintendo Switch.