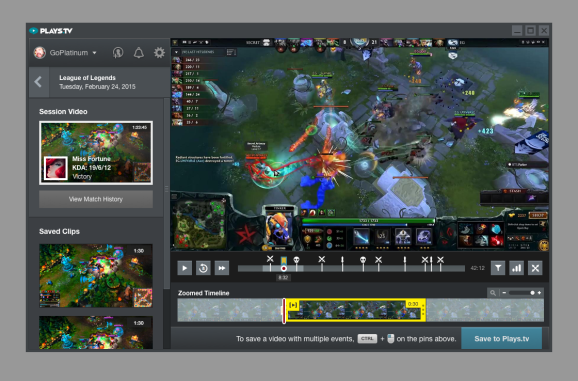 Forget about SportsCenter highlights — a company that can let you watch the best moments from games of Overwatch and League of Legends has just received some big league help.

Plays.tv announced today that it has received $15 million in Series A funding. Investment firm Shasta Ventures led the funding, but the San Francisco 49ers and NBA player Jeremy Lin also contributed. This is another example of people and groups from the world of real sports investing in video games, following the Philadelphia 76ers acquisition of esports teams last year. And who can blame them, with Newzoo projecting the esports market to be worth $696 million in revenues in 2017.

GamesBeat asked if the 49ers investment came from the team corporation itself or the pockets of the owners, the York family (Dr. John York and wife Denise DeBartolo-York, along with their son, team CEO Jed York). But a Plays.tv declined to respond.

Plays.tv makes a PC client that captures video from games and uploads them to the Plays.tv website, which users can then share on other sites and social media. It differs from something like Twitch in that players aren’t streaming their games, but rather capturing and sharing highlights. According to Plays.tv, the site has over 12 million users a month.

The company will use the investment to create new features for the platform.

“Plays.tv grew very quickly since its launch and our community really embraced the platform not just for the social sharing but for replaying and improving as players,” said Plays.tv chief executive officer Dennis Fong in a press release sent to GamesBeat. “With Shasta and our other investors, we are in a great position to make Plays.tv the most personal and relevant source of gameplay content, and the de facto platform to replay and share videos to get better at your game.”

Fong, who played under the name Thresh, was one of the first esports stars, making his mark in 1990s shooters like Doom and Quake. In 2007, he cofounded the gaming social network Raptr, which launched Plays.tv in 2015.

“Similar to watching game tape after NBA games, I love how Plays.tv allows gamers to analyze their own replays,” said Jeremy Lin in the press release. “This enables players to identify what’s working and what can be improved. I’m excited to see the pros continue to transform their game with tools like Plays.tv.”