Hearthstone’s next Standard year is the Year of the Mammoth. It’s an appropriate name, because Blizzard is making some mammoth-size changes to its digital card game behemoth.

The change in the Standard cycle moves cards from older sets out of rotation, making them only playable in the Wild format (where all cards are eligible). This year, however, Blizzard is also moving some of the game’s most powerful Classic cards to Wild. It’s also changing the way it releases new sets, getting rid of the single-player focused Adventures in favor of more Expansions.

“I think the changes are great overall,” popular Hearthstone player, streamer, and commentator Brian Kibbler told GamesBeat. “I’ve been advocating retiring Classic cards rather than nerfing them since Standard was introduced, since it allows players to still use their favorite decks in Wild. The addition of a full set rather than an Adventure mid year will shake the metagame up more, which should help with format stagnation we’ve seen in the past.”

The Year of the Mammoth could keep Hearthstone fresh, but it’ll also alter the way Blizzard makes money from the free-to-play game, which is the leader in a digital card game market that earned $394.6 million in revenue in 2016. 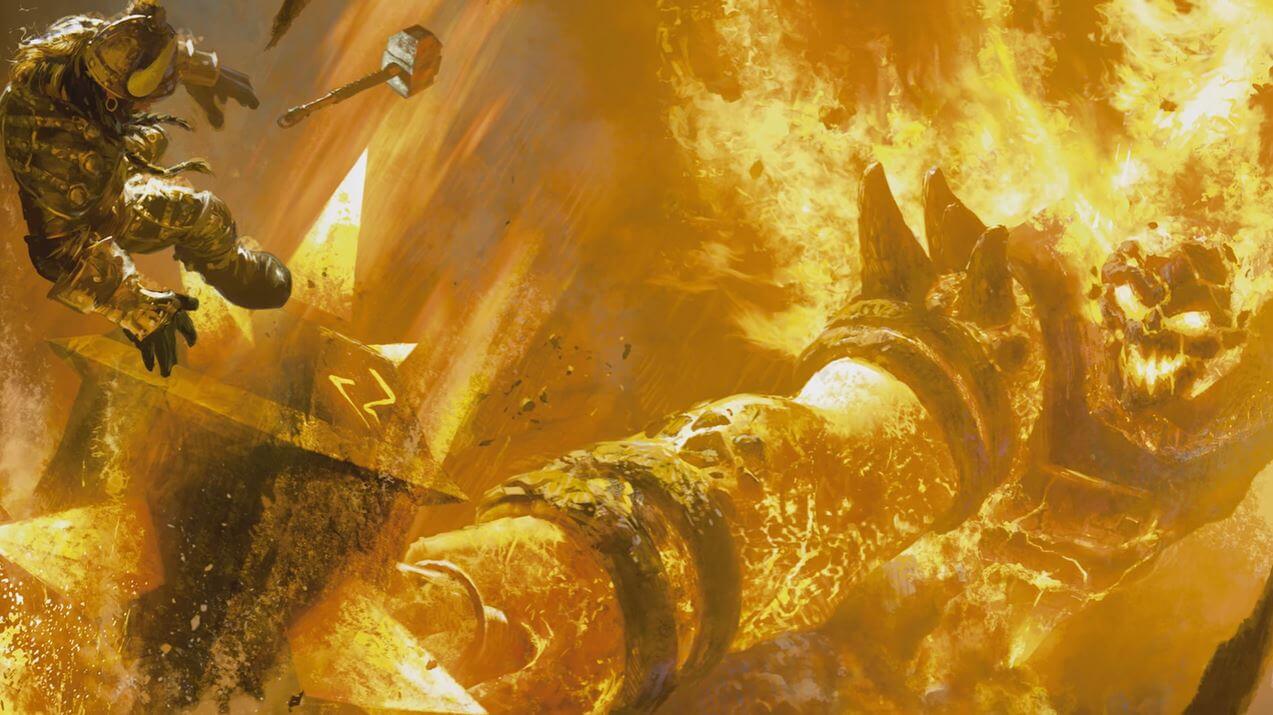 Above: From now on, his fire will only purge in Wild.

Why those Classic cards have to go

Last year, Blizzard nerfed some of Hearthstone’s original cards when it started the Year of the Kraken. Its original goal with Standard was to keep all Classic and Basic cards in the rotation forever, while disqualifying cards from older sets. But some of the original cards are so powerful that they see play in decks all of the time, even after the release of new expansions. The balance changes were meant to make those cards less viable.

But it wasn’t an ideal solution. Many of those nerfed cards became unplayable, ruining deck archetypes that players used to build around. Many argued that it would have been better to just move them to the Wild format, so at least their decks could live on somewhere. And that’s exactly what Blizzard is doing this time.

Blizzard is moving the following classic cards to Wild as part of a new Hall of Fame set:

The reasons for each vary, usually because the card is too powerful and sees too much play or is part of a combo that allows players to dole out large amounts of damage in a single turn. Blizzard before was set on not moving Classic cards to Wild, only doing it last year with Old Murk-Eye and Captain’s Parrot, two cards originally released during the Classic era as quest rewards. Now, it has set a precedent that this is an OK thing to do.

Blizzard told GamesBeat that it will only move Classic cards to Hall of Fame status when each new Standard year begins, not in the middle of one. So it still plans to make these moves rarely. However, it opens a new way for Blizzard to freshen its game while keeping players happy.

And it’s keeping them happy because Blizzard is giving players a full Arcane Dust refund on all cards moving to Wild while allowing them to keep the cards. So, if you have Ragnaros, you’ll get 1600 Arcane Dust and get to keep the minion. 1600 Dust is enough to craft another Legendary minion. It’s a best of both worlds scenario for players. They can keep their card for play in Wild while basically getting another Legendary minion of their choosing for free.

It’s also a win for Blizzard, since this can encourage more players to try out the Wild format. It introduces Wild last year along with the first Standard cycle. It’s a place that allows players to use any Hearthstone card in their decks. However, most players have stuck with Standard. Blizzard wants more Hearthstone fans to check out Wild. It’s even partnering with third-party tournament organizes to create Wild competitions, and it plans to launch a Wild Heroic Tavern Brawl.

Wild succeeding could help Blizzard make more money. Right now, many players restrain from buying cards from older sets because they know that they’ll become ineligible in Standard eventually. If more players get into Wild, the average value of all cards becomes more evergreen.

But the Standard format is the one played in most esports events, so it’s important for Blizzard to keep it popular. If players see the same decks over and over, they could become bored. Blizzard needs Standard to have more variety if it wants to keep taking advantage of an the esports market expected to be worth $696 million in revenues in 2017, according to Newzoo. 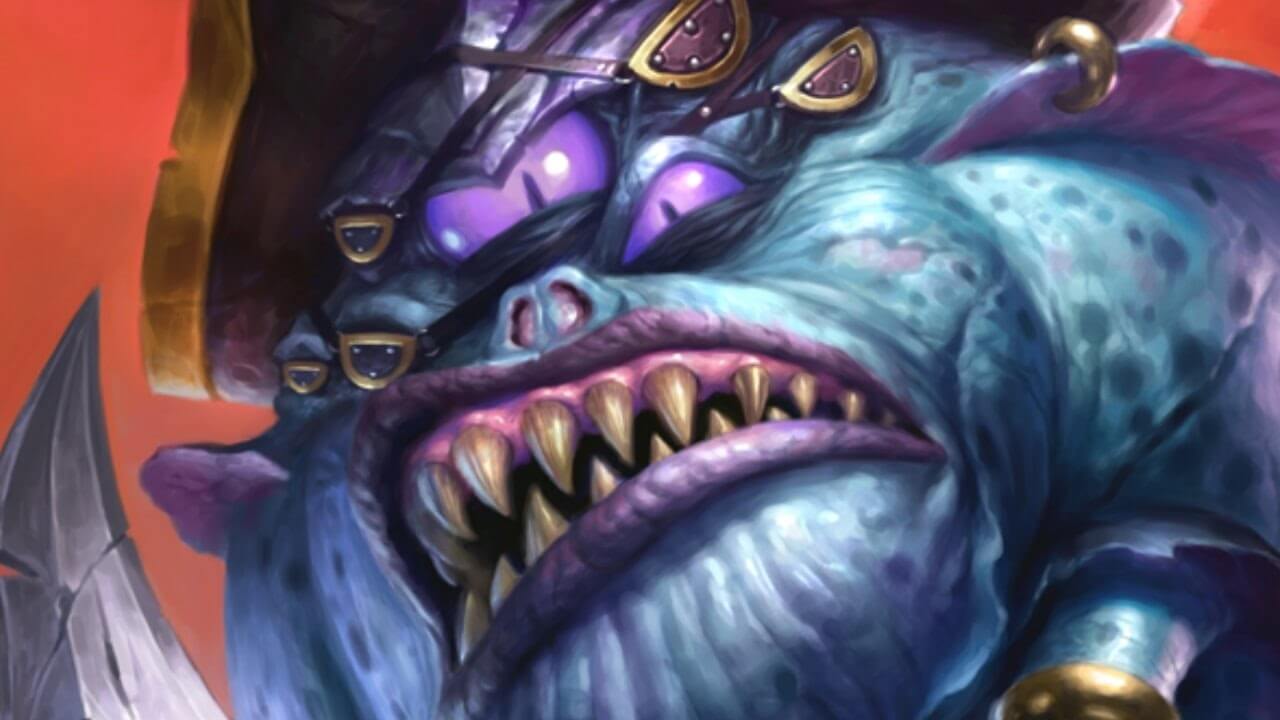 Above: Patches the Pirate from Hearthstone.

Right now, the variety of decks players go up against when fighting others in Standard is depressingly low. Most of your battles will go against Pirate and Reno decks, with the occasional Jade deck thrown in there. People aren’t experimenting, because these “net” decks are too good.

Blizzard already made moves toward fixing this problem by announcing nerfs for Small-Time Buccaneer and Spirit Claws, which will make Pirate and Shaman decks weaker. But these new changes could make sure that future expansions don’t devolve into such a stale meta as quickly.

All six of the Classic cards have been mainstays in Hearthhstone since the game launched in 2014. That’s three years of Ragnaros snipes and Sylvanas Deathrattles, three years of Freeze Mage, and three years of Miracle Rogue. Fighting against these cards and decks has gotten tiring.

And it’s also made it hard for other cards to succeed. Just look at the state of Hearthstone’s Legendary cards. These are the game’s rarest, offering powerful and unique effects. And few of them ever see consistent play. In the last two sets, Mean Streets of Gadgetzan and One Night in Karazhan, Blizzard released 25 Legendary minions. Right now, three of them see consistent play: Patches the Pirate, Aya Blackpaw, and Kazakus. Those three are all from Gadgetzan, meaning none of the five Legendaries from Karazhan get much love right now.

Sure, you’ll see a Curator or Raza show up in some fringe decks, but you’re much more likely to run into Ragnaros or Sylvanas. These cards are just too good to leave out when you only have 30 slots in your deck. Look at Medivh, a Legendary from Karzhan. For 8 mana, you get a 7/7 minion that gives you 1/3 minion that can summon you more minions when you cast spells. That sounds incredible, but it turns out it’s not better than Ragnaros. So most people just stick with Rag instead of letting a new card have its time in the meta.

Getting a Legendary from a card pack should feel great. It should motivate people to spend money on card packs in the first place. But it loses its impact when the vast majority of Legendary cards aren’t viable, encouraging people to spend less.

Moving these cards to Wild will allow players to try out some new cards. With Ragnaros gone, people can look for another late-game minion to put in their decks. With no more Power Overwhelming, Warlocks will have have to find new ways to burst out damage and control the board. Now, future expansions can introduce cards that encourage new decks that don’t have to compete with over-powered classics. Above: One Night in Karazhan could be Hearthstone’s last Adventure.

Why getting rid of Adventures is smart

Until now, new card sets alternated between expansions and Adventures. This year, Blizzard will only release expansions: one during the early part of the year, one for the middle, and one near the end.

Expansions are basically just card dumps, giving players new digital packs to buy. They introduce over 100 new cards. Adventures offered fewer cards, but gave players a story-based campaign filled with battles against computer-controlled opponents. You also earned cards just by playing through it, so you didn’t have to buy digital packs.

They both represented different forms of monetization. For Adventures, players could buy each wing separately for $5 or the whole campaign for around $20. With expansions, players just purchase digital cards packs. So, in theory, Adventures gave Blizzard more money upfront, while expansions encouraged players to dole out their dollars over a period of months.

But Blizzard has found a way to get a good chunk of change right when expansions launch. A few times, Blizzard has offered “preorders” for expansions, paying $50 to unlock 50 cards right when they release. Normally, $50 only gets you 40 cards, so it’s a good deal that a lot of dedicated Hearthstone players take advantage. It’s given Blizzard a way to make upfront revenue with an expansion release similar to how they would with Adventures.

But besides the whole money thing, Adventures can sometimes fail to add enough new cards to change Hearthstone in any meaningful way. The last Adventure, One Night in Karazhan, did little to alter which decks players preferred. Going into Karazhan, Shaman was the strongest class and Priest was the weakest. After Karazhan, they both stayed in those exact same spots.

It would be a more painful change if we were gonna lose those colorful and interesting fights against computer opponents, but Blizzard plans to make those a part of future expansions, starting with the second one in 2017. So, at that point, future sets will look like a marriage between traditional expansions and the old Adventures. And Blizzard told GamesBeat that it will not charge for this single-player content. 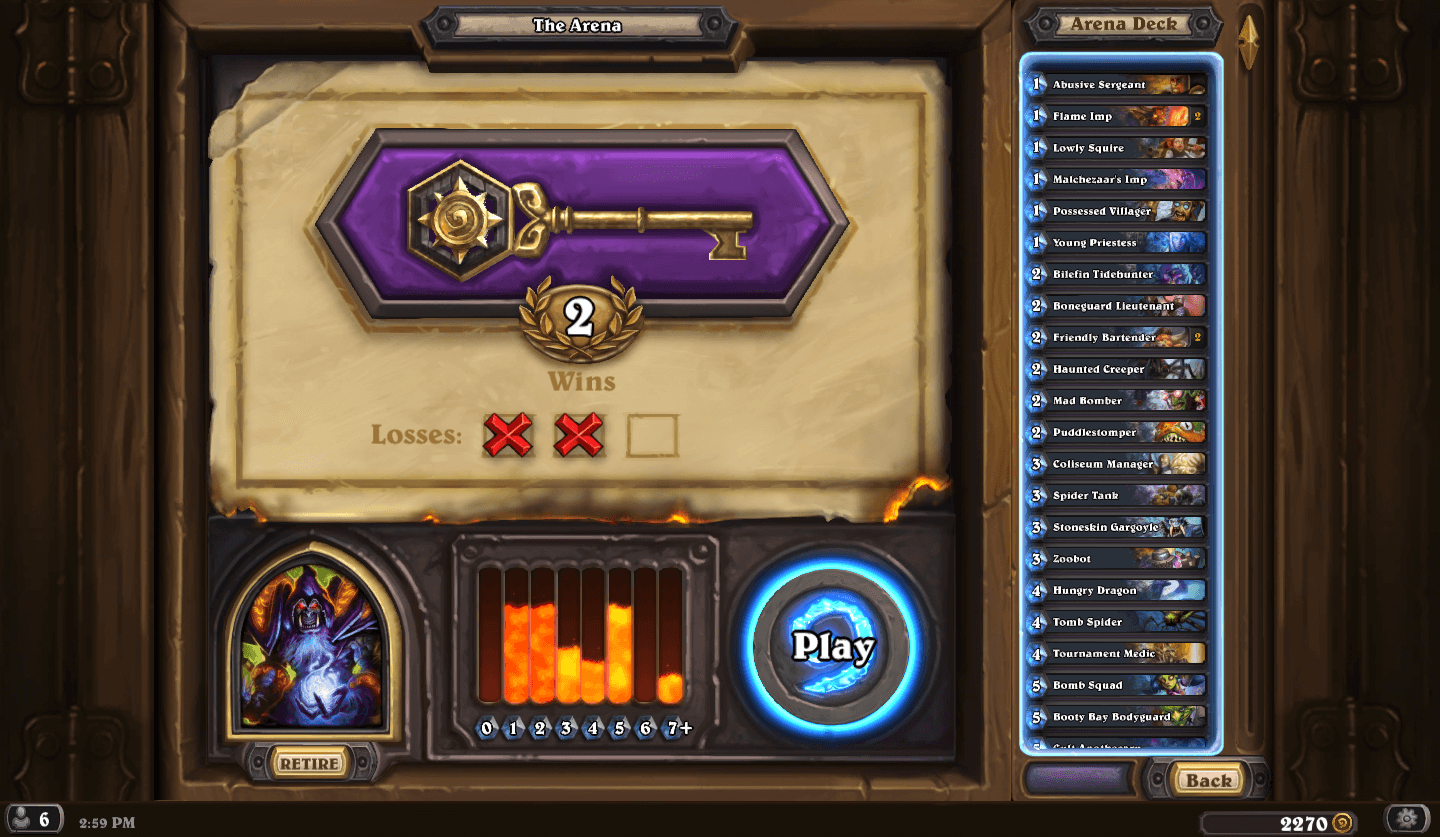 Above: Fighting in the Arena.

Arena is another popular Hearthstone mode. It has players creating their own decks by choosing between three options for each each slot. They then play with their deck until they rack up three losses (or earn a max of 12 wins) and get rewards based on their performance.

These changes won’t have much of an effect on Arena. Right now, Arena uses cards from the Wild format, so Blizzard moving things out of Standard doesn’t impact it. The only real change for Arena will come when new expansions release, since that introduces more cards for players to draft from (and Blizzard usually makes cards from the newest set more likely to appear).

But Blizzard has said that it is thinking about making changes to Arena, throwing out ideas of making spells appear more often or only making Standard cards appear in the drafting process. But Blizzard hasn’t committed to anything. 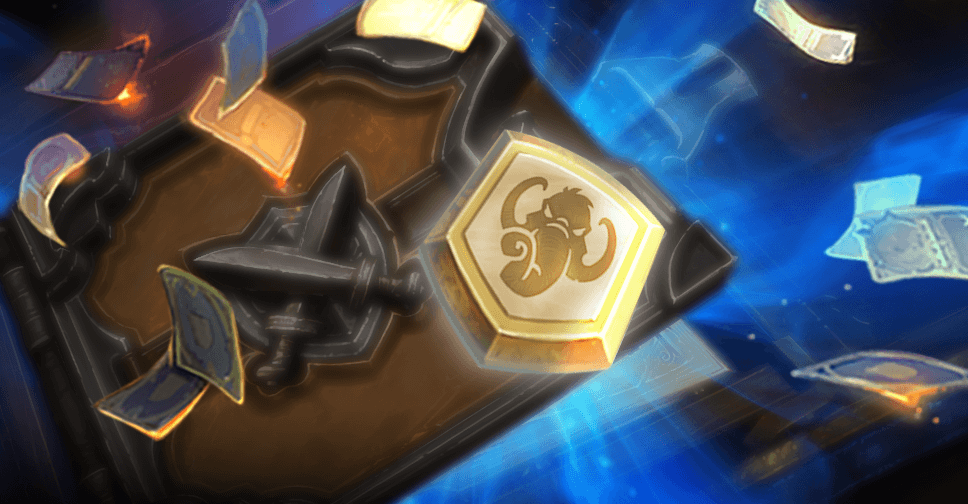 Above: So long, Kraken.

The Year of the Mammoth could be a landmark year for Hearthstone. The Year of the Kraken sometimes had problems keeping the game fresh, with classes overpowering the meta with too many fast-paced decks that punished players who preferred slower, control-based archetypes. The nerfs to Small-Time Buccaneer and Spirit Claws were a good first step, but the move of some Classic cards to Wild will add even more life to Standard.

And Blizzard dodged a bullet by giving players the full Arcane Dust refund while letting them keep the cards. People have little reason to feel upset about the change. Also, adding single-player content to future expansions takes away some of the sting of losing Adventures.

Right now, both the community and Blizzard have reason to be optimistic about 2017.