Juggler Games doesn’t want the memory of Jewish suffering during the Holocaust to fade, so it’s making a video game.

My Memory of Us is a stylistic puzzler that puts players in control of a pair of Jewish children in Poland during World War II. You must guide these kids through their German-occupied Jewish ghetto to survive. Along the way, you learn about their relationship while also giving players puzzles to solve. Juggler is promising to layer My Memory of Us with deep meaning and historical reality. The studio hasn’t announced platforms or a release date, but it does plan to show the game off at the PAX East fan convention in Boston on March 10 through March 12.

The inspiration for My Memory of Us came to Juggler and creative director Jakub Jabłoński after a lifetime of hearing stories from family members about the Holocaust. Jabłoński was motivated to enshrine those experiences in something permanent.

“We wanted to tell their stories to the world, about their tough childhood experiences; about their nostalgia, their longing for real friendship; and about together opposing the great danger that is war,” said Jabłoński. 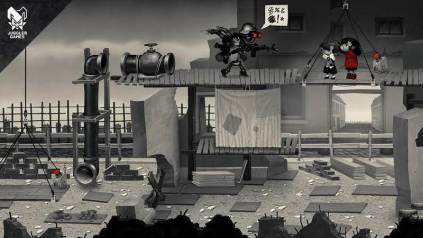 Above: Nazis? I hate these guys.

The development team also wants to give a child’s perspective on the war. That has led to a sketch-style look and a purer look at the evils of the Nazis. For example, the children view the SS troopers, with their gas masks, as robots. The concept is that they wouldn’t recognize this horror as human.

“One day, the Evil King simply changed all the rules,” Jabłoński explained. “He segregated people — some were marked as better, others as worse. He created his own rules and harshly punished anyone who was brave enough to oppose him. Our protagonists don’t agree to this new way of things, to the terror of the tyrant and his army of robots. They decide to find their own paths in this gloomy, yet fascinating world.”

Publisher IMGN.PRO is backing the game and handling distribution for Juggler. IMGN.PRO cofounder Łukasz Kubiak calls My Memory of Us an “important” game.

“It covers such important and meaningful topics — friendship, social exclusion, selflessness,” Kubiak said. “We want it to gain a lot of interest from gamers around the world. The themes of this game are about feelings, which we very often forget in a medium such as games. The style and charm of My Memory of Us will definitely make this a great experience even for more demanding gamers.”