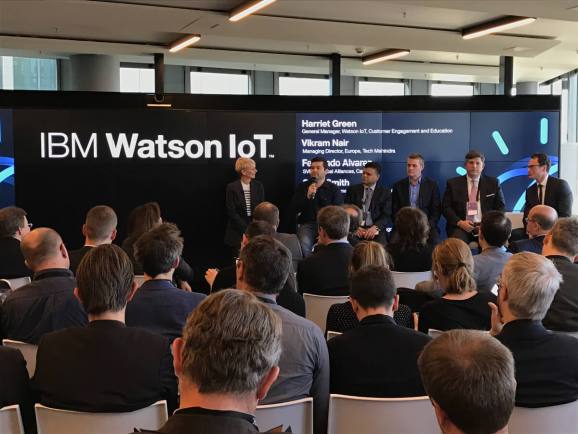 IBM has joined Indiegogo and Arrow Electronics in a partnership to support burgeoning startups and the maker community.

The cooperation was announced Thursday at the Genius of Things Summit, a gathering of more than 400 IBM Watson partners to celebrate the opening of IBM Watson IoT global headquarters in Munich, Germany.

“We are seeing Indiegogo move from having a funding platform to really becoming a springboard for entrepreneurs, and we can’t solve everything on our own so we’re really excited to bring in experts in the right areas,” Indiegogo cofounder and chief business officer Slava Rubin told VentureBeat in an interview.

For more than a year, Indiegogo has worked with partners like Arrow to scale the manufacturing of products that turn out to be big hits.

A similar deal was struck with hardware accelerator Wearable World in 2015, but the Arrow deal is the first of its size, Rubin said.

“We’ve had a number of small partnerships that we’ve experimented with but nothing at the scale of what we started with Arrow last year,” he said.

As part of the partnership, all businesses that take part in the service will get access to IBM Watson Bluemix and its collection of more than 130 other cognitive services for the Internet of Things.

“I think IBM’s attraction to the partnership is very much around, as Slava said, moving from just the funding to something that incubates and accelerates entrepreneurs,” said IBM spokesperson Deon Newman.

Bluemix can be used to train machine learning so the small companies Arrow works with can apply more artificial intelligence to their products. With Watson cognitive services, small companies with few resources don’t have to start from scratch, said Arrow president and chief digital officer Matt Anderson.

“So there’s a company right now that’s working on applying facial recognition to food — a smart plate that counts calories so you can count calories without having to whip out your phone and enter things,” Anderson said. “For them to go and try to develop face or food recognition software is a complete reinvention of the wheel. With Watson IoT, our engineers know that Watson already has that, and so they can literally just kind of drag it onto their solution, train Watson, and be up and running.”

Bluemix access comes in addition to an opportunity to join the global entrepreneur program and $50,000 in resources from Arrow, which is made available to campaigns that meet certain criteria and are deemed Arrow Certified. The companies are also eligible for part of $1 million being invested in Arrow Certified companies that launch crowdfunding campaigns. Thus far, four companies have received $250,000 from the fund.

Among them is Noria, which makes a next-generation window-mounted air conditioner and raised $3.6 million on both Kickstarter and Indiegogo in Spring 2016. There’s also FenSens, whose license plate-mounted set of sensors detects objects when your car is in reverse, and Play Date, a remote control ball with a camera inside so you can play with your pet when you’re away from home.

IBM Watson paid for travel to report on the coverage of the opening of the Internet of Things headquarters in Munich. Our coverage remains objective.