I always like the fairy tale that tells me that games can be made anywhere by anybody. While walking the streets of Berlin after Casual Connect Europe, I found a couple that reinforced this idea for me again.

It was pure serendipity. I was trying to get on a tour of the city and bought a ticket for a double-decker bus. Just ahead of me was a couple that was trying to do the same. But as we stepped onto the tour bus, the driver told us we were too late and that they were shutting down for the day.

The man noticed I was wearing a Casual Connect badge and asked me about it. He introduced himself as Yunus Ayyildiz, and he was visiting Berlin with his wife and colleague, Kubra Sezer Ayyildiz. They started an indie mobile game studio called GameBra.in and came to town because their game Hocus had been nominated by Casual Connect as one of the best mobile games. The title is on both Android and iOS. Their other two titles are Rop and Voi. Again, they are simple puzzle games. 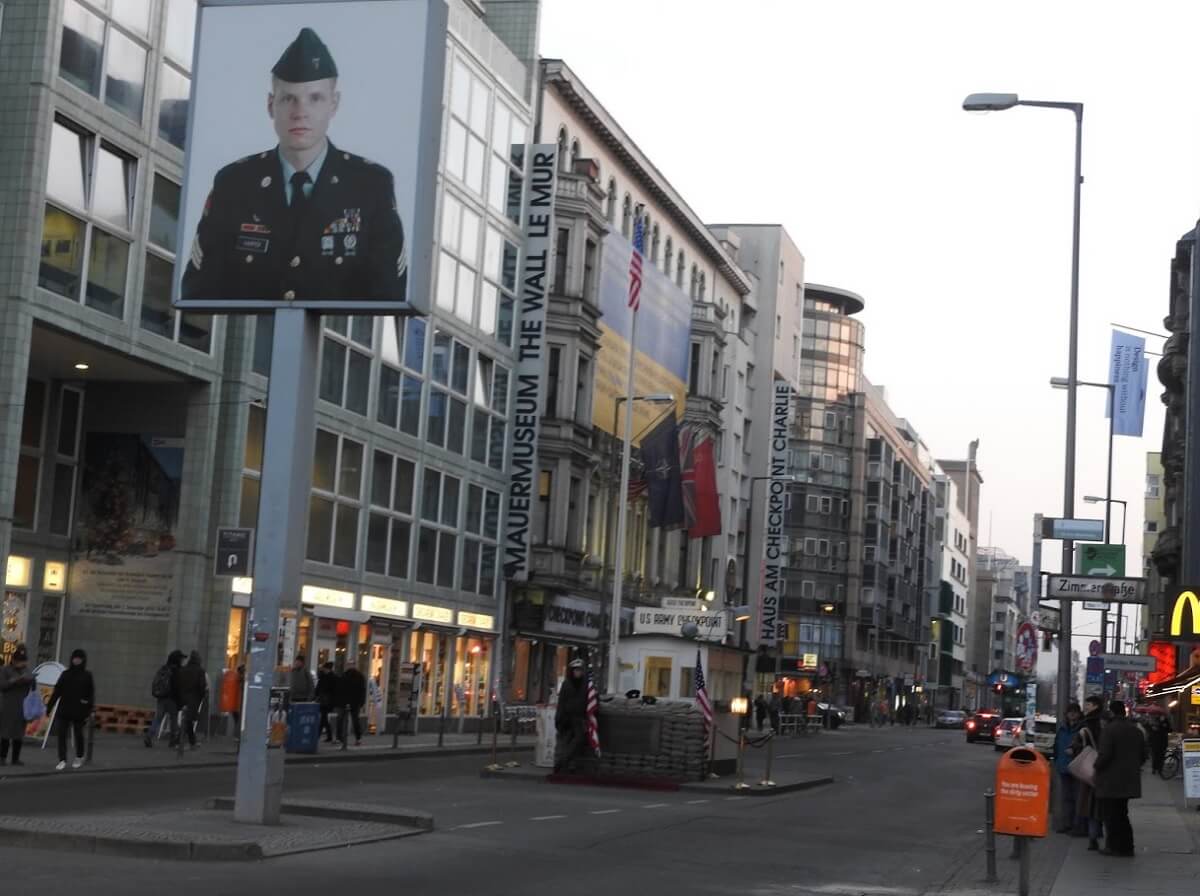 Above: Checkpoint Charlie in Berlin

I took them on a walk to Checkpoint Charlie, the crossing point where East and West Berlin met during the Cold War. Checkpoint Charlie was where American guards faced off against Russian guards, and it could very easily have been the flashpoint for war. It was a symbol of the Cold War. I pointed to a few graffiti-covered stones that were the last remaining pieces of the Berlin Wall. It was here, during the Berlin crisis of 1961, when American tanks pointed directly at Russian tanks on the other side.

It was cold, so we walked into Starbucks to have a coffee. They told me that they were from Ankara, Turkey, and that Hocus was one of several games they had on the app stores. And this one was a hit, with more than 5.5 million downloads to date.

Built in Adobe Flash, it is a simple game where you move a red ball around geometric shapes in a black-and-white landscape. The puzzles were inspired by the artist M.C. Escher, Yunus Ayyildiz told me in his broken English. I thought that was fascinating. Here was a couple that was barely able to speak my language, yet they were able to communicate through the universal language of gaming. 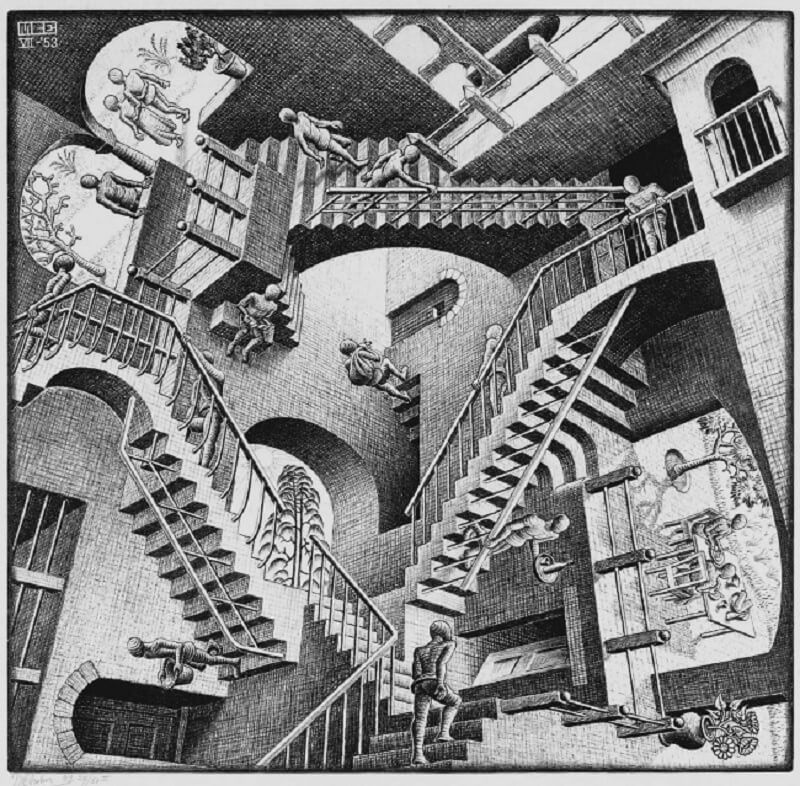 Above: Relativity by M.C. Escher

I thought back decades to my days in the dorms at the University of California at Berkeley, when I had a poster of Escher’s Relativity hanging on my wall. Yunis showed the game to me on his smartphone, and he told me how happy he was that the game was starting to get recognition.

The couple have been making games together for a while. Yunus Ayyildiz studied game design at Orta Dogu Teknik Universitesi, or Middle East Technical University in Ankara. They met in Ankara, got married, and they now build their games in a coworking space with a number of other game developers. Their company, Gamebra.in, has been around since July of last year. 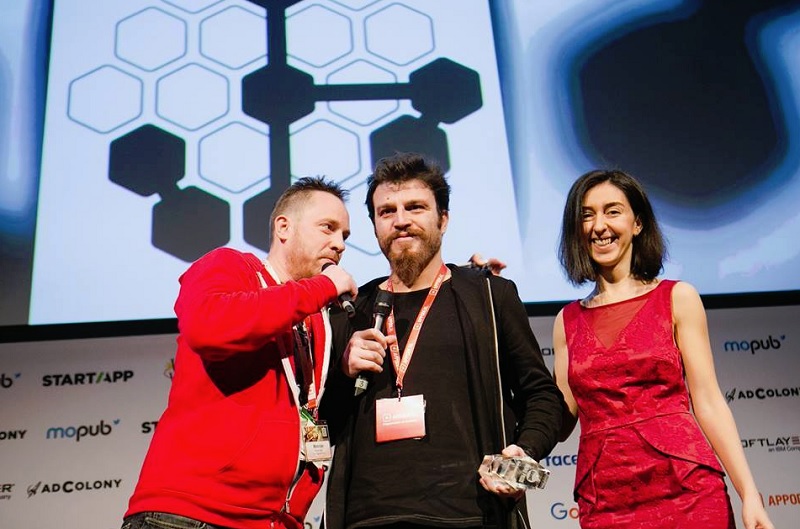 Above: Yunus Ayyildiz of Gamebra.in at Casual Connect Europe.

“This is our dream,” said Sezer Ayyildiz about making games for a living.

Asked if he wanted to build a large company, Yunus said he didn’t. He wanted to be an artist and to make games as an independent without anything standing in the way of his creativity.

Hocus took about four or five months to conceive. But the development was iterative, and it took about eight months to get it working right. 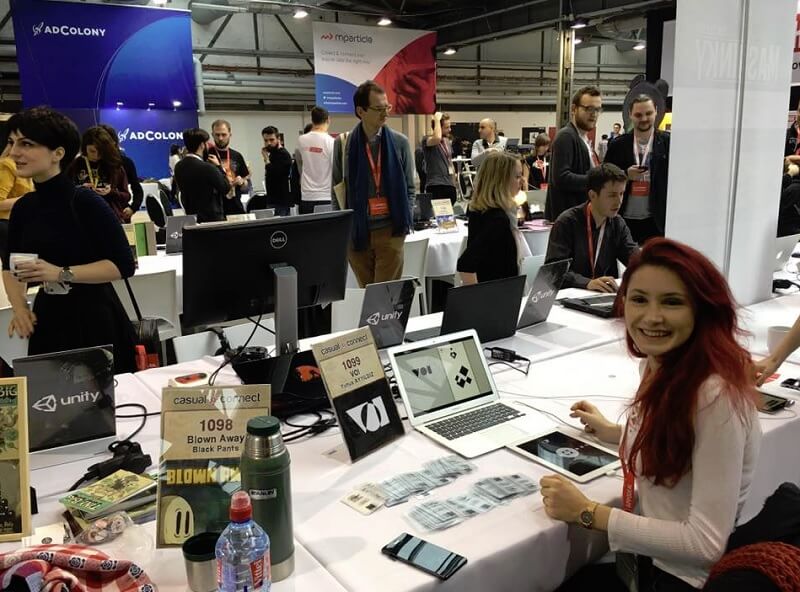 Above: Kubra Sezer Ayyildiz of Gamebra.in at Casual Connect Europe.

They told me they wanted to visit San Francisco for the Game Developers Conference in late February. But they had to cancel the visit.

Sezer Ayyildiz told me that her visa application has been turned down twice. Yet they had no trouble making it to Berlin to enter their game in the independent games contest. As we were talking about the Berlin Wall, just a short distance away from Checkpoint Charlie, Sezer Ayyildiz said, “Trump wants to build a wall.” And she shook her head.

I wished them luck, and I told them that not everybody thought the way that Trump did in America. I parted ways and walked back to my hotel. Hopefully, they got a nice tour of Berlin. Yunus Ayyildiz said they have a new game coming called Pocus. Maybe they’ll be able to show that one in the U.S.