This report is a bit of a “Switch” since Nintendo is the only console brand to make our top five chart this time around.

GamesBeat has partnered with iSpot.tv, the real-time TV ad measurement company with attention analytics from 10 million smart TV screens, to bring you a monthly report on how gaming brands are spending their TV ad dollars and which commercials are generating the most digital response (iSpot measures actions across Facebook, Twitter, YouTube and all major search engines). Below are the top five most-engaging gaming industry brands from Jan. 16 through Feb. 15. 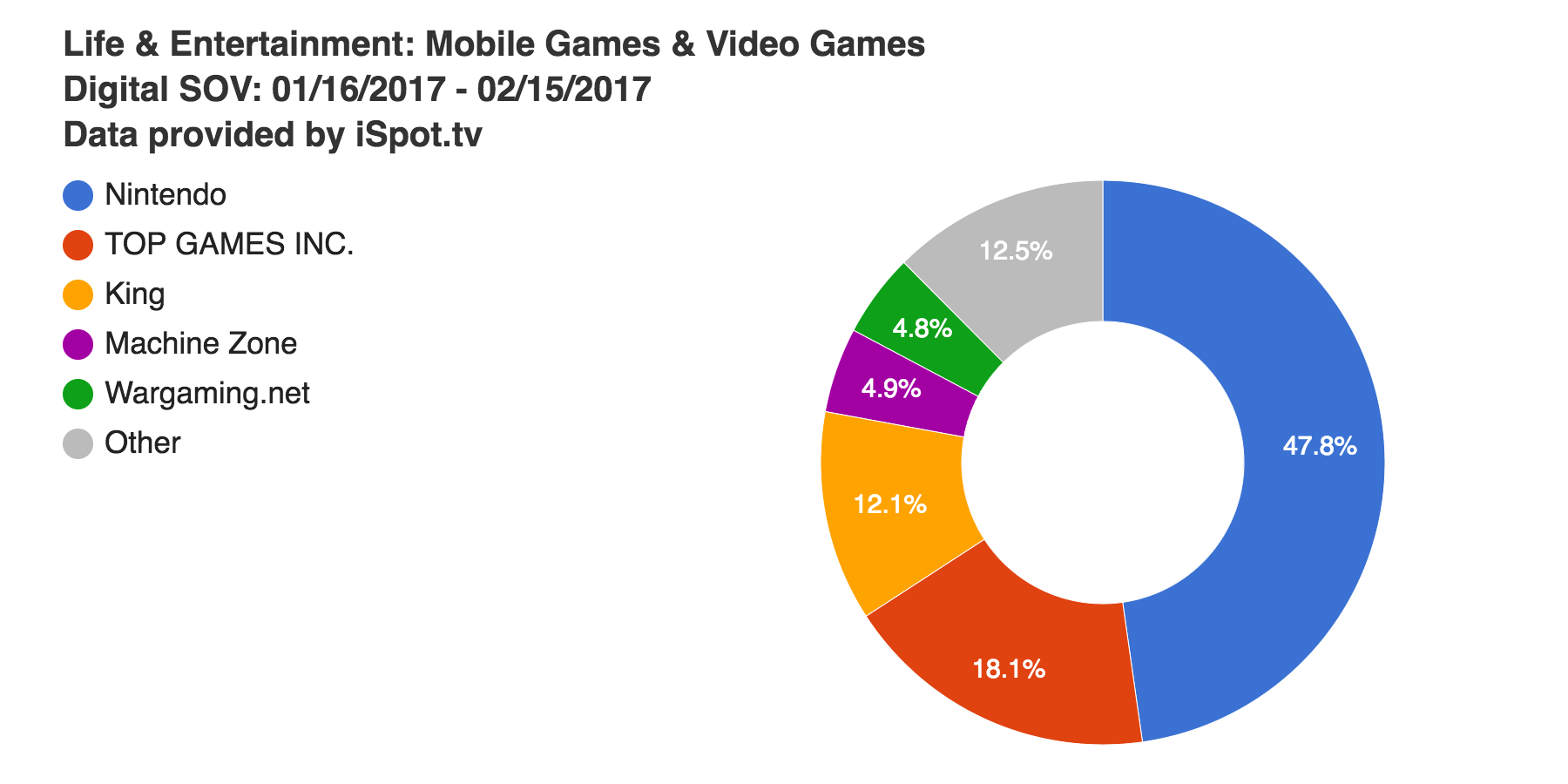 Nintendo was the only console brand that generated substantial buzz around its TV ads in the last 30 days — and generate buzz, it did. It captured nearly half of the gaming industry’s digital share of voice and was closely followed by Top Games Inc. Overall, during the period measured, 27 brands spent an estimated $61.6 million running 67 spots over 16,700 times on national television, generating almost 1.9 billion TV ad impressions. As expected, brands that shelled out for Super Bowl ads saw big boosts in conversation.

At the top of the ranking is Nintendo, which, partly thanks to a Super Bowl spot, generated 47.8 percent of the industry’s digital SOV. All told, the company spent $8.2 million on three ads that ran 1,169 times with 170 million TV ad impressions. The most popular spot was “Believer,” featuring music by Imagine Dragons. This ad aired during the Super Bowl and accounted for 67 percent of the brand’s digital activity. In total, Nintendo ads collected 15.5 million online views, over 268,000 social actions, and over 42,000 searches.

In second place is Top Games Inc. with 18 percent of the industry’s digital response. It spent an estimated $8.4 million on two ads that aired 1,136 times, generating over 135 million TV ad impressions. Naturally, its ad “Battle of Evony” that aired during the Super Bowl prompted the most buzz around the brand. Overall, Top Games Inc. ads had 7.8 million online views, over 4,300 social actions, and over 26,200 search actions.

King takes third place with 12.1 percent of digital engagement thanks to just one ad: “Bubble Witch Saga 3: Owl.” Unlike other brands on the chart, King didn’t advertise during the Super Bowl. It spent $2.2 million on 2,694 airings of the Bubble Witch Saga 3 ad, which resulted in almost 193 million TV ad impressions. During the period measured, King had over 313,400 online views, over 24,400 social actions, and over 55,200 searches.

MZ is in fourth place, narrowly edging out Wargaming.net with 4.9 percent of the industry’s digital SOV. Its Super Bowl teaser spot “Mobile Strike: The Party Pooper” generated over half (51 percent) of the brand’s digital engagement during the time frame. The brand spent $9.1 million on three spots that aired 4,090 times, which resulted in 245 million TV ad impressions. In total, Machine Zone netted 8 million online views, over 32,400 social actions, and over 56,600 searches.

Wargaming.net closes out the ranking with 4.8 percent of the industry’s digital engagement. It had three commercials that each aired once, with two of them running during the Super Bowl. Its spot “World of Tanks: Real Awful Moms,” a spoof on the “Real Housewives” series, was the best-performing ad for the brand based on digital engagement. Wargaming.net spent a total of $5.3 million and generated 121 million TV ad impressions, nearly 2.5 million online views, over 6,500 social actions, and almost 10,600 searches.