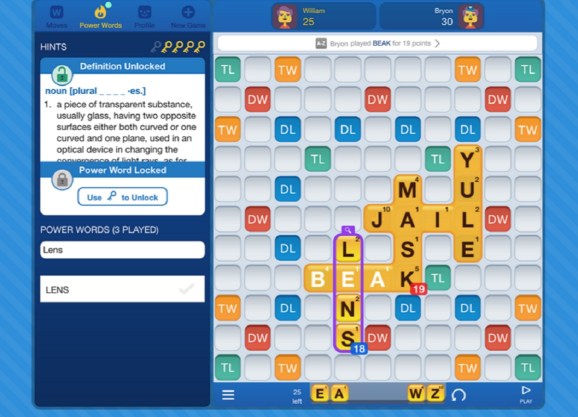 Zynga's Words With Friends EDU is refashioned for classrooms.

Television has been long held as the gold standard in the world of advertising, and marketers are comfortable using their tried and true gross rating points (GRPs). The late ’90s brought the dawn of the World Wide Web, and with it an unique capability – the click. GRPs and click-thru rates (CTRs) have long defined marketers assessments of media dollar effectiveness. Even though the mediums differ greatly, TV and first generation digital KPIs are still applied at large to all mediums, including mobile apps. Their audience is near eclipsing TV and has already surpassed desktop, and if time spent is any indication, you can argue that consumers on mobile are the most engaged advertising audience there are. So it’s more critical than ever to identify performance metrics which capture the breadth of the engagement and attention mobile has to offer.

According to a recent eMarketer report from September of last year, time spent on TV has declined by 30 minutes per day for US adults since 2013, while mobile time spent has increased by over one hour.

I’d bet that the reason why mobile is not yet taking its rightful share in marketers ad spend is because KPIs are still incredibly confusing, and the tried-and-true GRP and CTR just don’t fit.

While CTR is still on nearly every single campaign report in the land of mobile media, the days of measuring CTRs as a legitimate indicator have passed. In fact, all the way back in, 2009 ComScore published a report showing 8 percent of users account for 85 percent of clicks. Still, as marketers we cling to CTR as a vital, albeit inaccurate representation of campaign success.

Now let’s turn to the massive disruption in the consumption of entertainment, which has thus made a dent in GRPs which used to be much more easily achieved. A recent study by Videology found that only one-third of millennial males plan to pay for cable in 2017, and 53% have already cut the cord. And the lingering question – are consumers even paying attention to commercials?

Now we turn to mobile KPIs – attention and engagement. Mobile is our most intimate media device. It’s the first place consumers look when they wake, and often the last thing they look at before they fall asleep. Over the course of a typical day, a 2015 Deloitte study found that the average consumer checks their phone 56 times, up from 33 times in 2014. An entirely new set of standard KPI measurements is needed to properly capture consumer engagement and attention and the effectiveness of mobile ads.

Diving into attention and engagement metrics

Due to the ubiquity of devices and the amount of time people spend tapping them all day, players on mobile are the most attentive audience there is. But not all forms of attention – commonly referred to as engagement in marketing parlance – are created equally.

Marketers require a nuanced definition of engagement on mobile, as it has unfortunately become a catch-all moniker for any number of actions – including a video view, a share, a game play, or any kind of tactile response that is not a “click.” How are marketers to contend with this nuance of a metric within a metric – an engaged share, an engaged view, an engaged play? But contend we must, and we need to assign different value to the effort required by a consumer to simply view or share something, as opposed to actively engaging with a brand.

A 2016 eMarketer white paper investigating attention and engagement metrics noted that The Economist and Financial Times have crafted a CPH, or Cost Per Hour, in pricing digital media. The longer an ad was viewed, these publishers found a significant increase in awareness, association and consideration, and have ventured to price accordingly.

The future of mobile means increasingly engaging experiences for consumers. Brands can tap into this engagement by developing smart campaigns that focus on achieving the right kind of KPIs. In my perspective, these metrics include active engagement rate and attention.

Gabrielle Heyman is the head of global ad sales for Zynga, where she is responsible for driving direct and programmatic advertising revenue and specializes in mobile, video and engagement advertising.