When you own land, you often own the rights to minerals, oil, or metals beneath it. Do you also own the right to virtual or mixed reality creations on it? And do you have the legal ability to legislate their use or positioning over virtual representations of your property?

That’s what Milwaukee County appears to be saying. 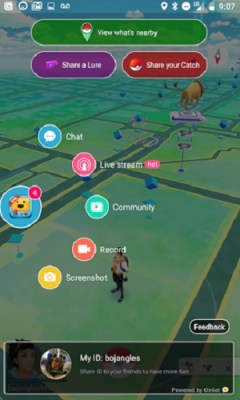 Above: Omlet Arcade on top of Pokémon Go.

The county beside Lake Michigan has passed an ordinance requiring companies creating virtual or mixed reality creations in apps to get a permit to locate them in the real world. Niantic, the company behind Pokémon Go, would have to pay between $100 and $1,000 in order to assign Pokéstops inside public parks, for instance, and to allow the game’s creatures to roam there.

This is an interesting precedent.

Augmented reality is a virtual overlay on actual reality, painting digital objects over analog backgrounds. The digital objects — whether monsters in a game, tools in a Microsoft Hololens, or directions on a real-time mapping systems — don’t impinge on “reality” in any way.

However, they do have impacts.

The county has had an influx of mobile game players who, it says, added traffic, left trash, potentially affected ecologically sensitive dunes, and cost the sheriff’s department extra due to required security.

On the one hand, public spaces are public, and people have a right to go there. On the other hand, the digital world is having an increasing impact on the physical world. Ask the neighborhood restaurant that was flooded with foodies after the Michelin Guide — the gourmet’s bible — mistakenly awarded it a Michelin star.

The state of Illinois is apparently considering a similar statute, so this appears to be something the mobile games industry — and perhaps the entire mobile and mixed-reality community — will have to deal with.

The result could be chaos and gridlock, as mixed reality and augmented reality seek ways to get permits for thousands of global locales and legislative areas.

And the costs could cripple a still-young industry.