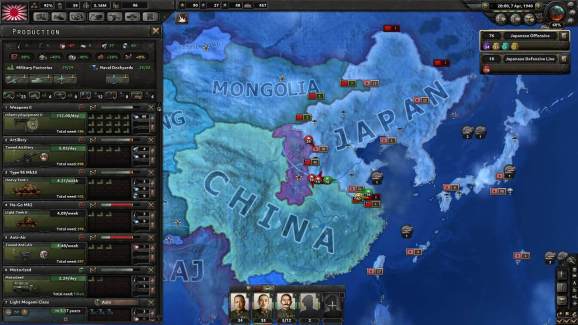 Paradox has created another hit by giving its audience the in-depth strategy war game it craves.

Hearts of Iron IV has surpassed half a million copies sold since its debut in June, according to publisher Paradox Interactive. This World War II grand strategy game has players taking control of any nation with the goal of defeating the Axis, the Allies, and The Comintern powers. As is standard for Paradox, the company is promising to pour time and effort into the game with ongoing support to ensure it rewards its dedicated customers.

“As a result of this success we are able to take advantage of extra time to add tweaks and polish to the game,” Paradox Interactive chief executive Fredrik Wester said in a statement. “Our community has high standards, and we will work hard to to live up to their expectations in the coming weeks and months. We really want HoI to be the best it can be for our fans.”

Hearts of Iron IV is the latest Paradox game to find a significant audience on PC — other hits include Stellaris, Europa Universalis IV, and Crusader Kings II. The company has steadily built up its game development and publishing business by catering to the kind of PC gamer that adores complex, realistic strategy games across a variety of genres. This led to talks of the company going public in March 2016, and then the publisher launched its IPO in late May. Paradox now trades on the Nasdaq First North Premier as PDX.

Going forward, the publisher is going to stick to what it does best, and it plans to offer up even more content for that audience.

“The PC remains the primary platform for games of this nature,” said Wester. “Even genres that have traditionally been seen as niche can find a large audience, if a developer is dedicated to quality, variety, and learning from both previous experiences and the community at large.”