Sometimes even the greatest heroes need a team.

At the Social Hall at The Regency Center in San Francicso Monday night, I tried out a press preview of Scrap Entertainment’s Zelda-inspired room escape: Defenders of the Triforce. So-called room escapes — where people are locked in a room and given a time limit to solve puzzles and escape — are booming around the country. According to MarketWatch, this entertainment grew from none at the start of 2010 to nearly 3,000 attractions by mid-2015. The Zelda themed room also falls in line with Nintendo’s current strategy of leveraging its IPs outside of video games, such as the upcoming Universal Parks partnership,

Now, unlike traditional room escapes, Defenders of the Triforce doesn’t have you escaping from a room, and while it is done in teams, it isn’t isolated: most room escapes are played with one group at a time in a secluded location. Instead, the event took place in a large open room, with many teams of up to six players each at an individual table. Each team had their own binder to track and organize clues, rule sheet, and a basket on the table to hold items. Oh, and everybody got green Link caps, in true hero fashion. 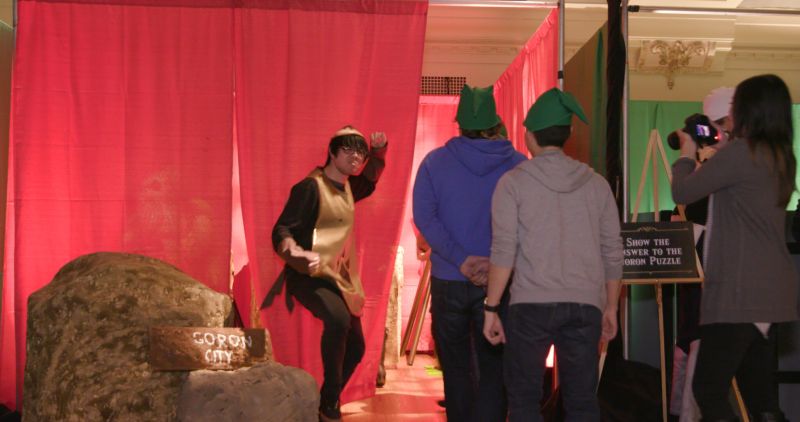 Above: Some of the game’s characters were played by real actors — like the Goron seen here — while others were just lifeless cardboard cutouts.

This, however, is a different approach than most room escapes, which are usually played with teams actually trapped in a room, with only one squad actively working on solving the puzzles at a time. I’ve done a lot of room escapes, and I was a little skeptical of this more open-air approach, but for the most part, it succeeded in capturing the same thrill and rush of escaping from a room, albeit to a lesser degree, even without the confinement or privacy.

Players worked between the main room and other adjoining areas to gather clues and interact with various characters throughout the event, with most of the puzzles being tasks we returned to our table to figure out and complete. These ranged from math puzzles and mazes, to — yes, of course — figuring out how to open chests. There were some clever solutions and prop use (though at least one answer my group figured out without solving the puzzle, which isn’t the best design), and while they all had a Zelda theme, it would have been cool to see some tasks take their inspirations from Zelda puzzles or game mechanics. Pushing blocks (or even something with torches?) could have been a nice way to really have the Zelda flavors on full display, instead of just as thematic inspiration. Oh, and don’t worry if you get stuck: People dressed up as big blue Navi — Link’s fairy companion —  walked around as well (though, I’m just going to straight up brag and say we didn’t end up needing to rely on them).

But still, there’s something to be said about running around for an hour wearing a green Link cap and trying to solve puzzles before the timer ran out. Even if parts of it were a bit corny, they were mostly my type of corny, and there were some nice little touches that fans of the series will enjoy, like being welcomed to the forest by a Kokiri. 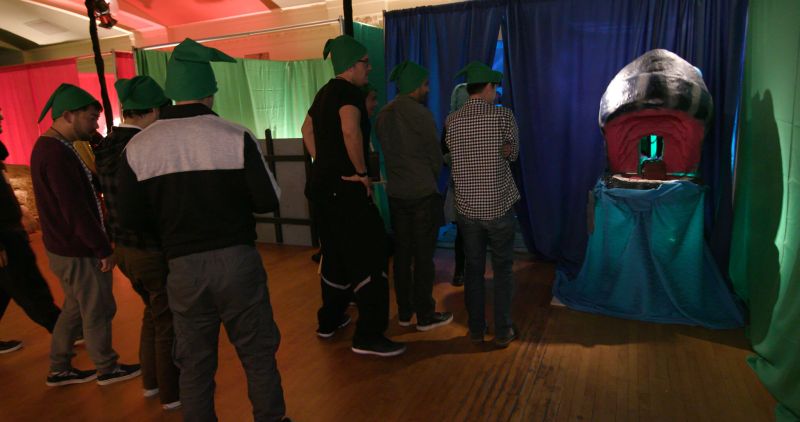 Above: The overall production values for the room escape seemed a little low. Like this Jabu-Jabu, for example.

The overall production values, though, were a little on the low side. I’ve been in some crazy escape rooms (I’m talking larger than life giant codexes and actual moving fireplaces), and this touring game was definitely weakened by its need for portability. The video that introduced everything relied on static old art from The Legend of Zelda: Ocarina of Time circa 1998 (I suppose it could have been from the 2011 3DS’s remake, but still) and while some of the characters were played by actors (the Goron actor in particular was a treat), some characters were just cardboard cutouts. Other choppy areas stuck out, like a roughly made Jabu-Jabu statue that awarded players chests and a seemingly low-budget Ocarina of Time.

Now, Defenders of the Triforce doesn’t have the luxury of having a permanent physical location — as most room escapes — but by calling itself one it still draws comparisons to rooms that do, and while the puzzles were clever, other areas of the overall atmosphere needed a little more attention.

Having so many groups going at once also caused some flow problems. Since the activities required going to different areas of the room and interacting with characters, those areas got bogged down with lines as groups all arrived at the same conclusions at the same time. It was by no means game breaking, but still slowed things down.

After the hour ended, the host walked everybody through the solutions to the puzzles, before wrapping with a projected video of Zelda telling Link how important it was to work in balance with darkness, an odd message that doesn’t really seem to gel with the rest of series lore, but hey. It’s also worth noting that the tickets are a little on the pricey side (regular tickets are $41 ahead, and $46 at the door per person), especially once you factor in the cost of playing in teams and not just by yourself. 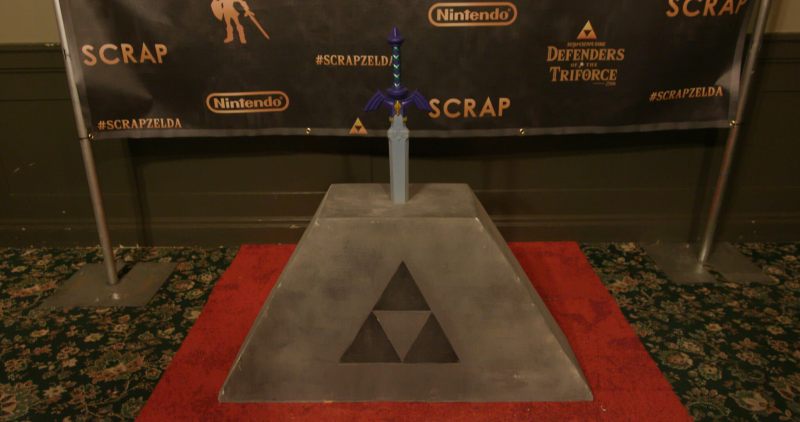 Above: No, you don’t get to keep the Master Sword if you win. Learn from my mistakes.

But Defenders of the Triforce was a lot of fun. It played to the Zelda fan in me, and while it wasn’t perfect — or the best room escape I’ve done — it was still an enjoyable night out, and something Zelda fans should check out as it travels.

Oh, and we were one of only four teams to actually complete the game. So take that, Ganon.

Defenders of the Triforce is currently on tour throughout the country, and will return to San Francisco in March. Nintendo provided GamesBeat with entry to the press event for the purposes of this review.