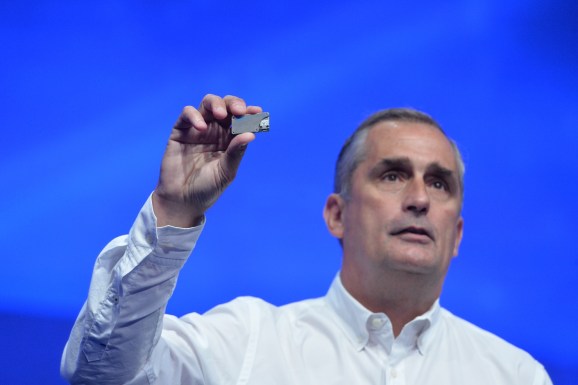 Intel CEO Brian Krzanich is tired of hearing how his company missed the mobile revolution, at least for the first wave of smartphones and the 3G and early 4G wireless networks that they relied on. After analyzing what went wrong, he’s more focused on Intel cashing in on the next wave of even speedier wireless technology: 5G.

With the entire mobile and telecommunications industry coming together next week for their annual conference, the Mobile World Congress, all manner of 5G products will be on display. Intel, too will be unveiling its latest mobile gear for the expected next step in wireless. But it’s not just the products, it’s the way Intel has gone about developing and testing them that could improve the chipmaker’s prospects, the CEO says.

The lesson of Intel’s earlier failed mobile efforts was all about hubris and going it alone. Smartphone and tablet makers largely ignored Intel’s proprietary chips, relying instead on designs from ARM Holdings that were widely licensed and improved upon by different companies. And as Intel missed the new mobile market, now selling 1.5 billion devices a year, sales of its core PC chip market started to tank because smartphone-wielding consumers saw less need to upgrade their home computers.

On 5G, by contrast, Intel has been heavily engaged with government agencies, industry associations and other leading companies in communications gear such as Nokia, Ericsson and Huawei to help set the technical standards for how the new wireless technology will operate. Intel has also partnered early on for trials and tests with the big mobile carriers like Verizon, AT&T and China Mobile that will be on the front lines of deploying some of the first 5G capable networks.

“We’ve gone with partnerships this time rather than go a lone way, which we did on 4G,” Krzanich tells Fortune in an exclusive interview ahead of the big industry gathering in Barcelona. “So we’ve done 5G much differently by engaging with the industry and really becoming a partner with the industry.”

The key question is whether Intel’s expertise and dominant position in making computer chips, used in everything from consumer laptops to giant corporate data centers, will provide much of an edge in the evolving 5G marketplace. One problem with the company’s earlier mobile efforts was a lack of appreciation for the different priorities of a smartphone from computers, such as the greater need to conserve power because of the device’s small battery and need to stay on all day without recharging.

But 5G networks will not only operate at far faster download and upload speeds than today’s 4G networks, they will also be asked to carry many times more data from all kinds of new Internet-connected devices like self-driving cars and drones. Autonomous vehicles, for example, will collect vast amounts of sensor data about conditions, traffic, and their surroundings while needing to connect with high-definition mapping data and other content.

Intel’s strategy will be to provide a full suite of products for covering almost every part of the new networks that will all seamlessly interact, Krzanich explains. In his vision, the company’s 5G modem chip for cars will connect with other high capacity Intel computing chips and sensors in the vehicle and then send data back to data centers that, of course, also run on Intel chips. The same will be true for robotics, drones, and home broadband, he says. And 5G networks will have to be designed to be more flexible, relying on software that can be reprogramming to handle many different tasks running on more generic hardware, instead of being built on more customized hardware dedicated to specific tasks.

“You’ll be able to service your customers with a single engineering product, and we believe that differentiates us from most of the rest of the competitors,” Krzanich says. Like Apple’s advantage in controlling both the iPhone’s hardware and software, that should mean that the links between different parts of the 5G network all made by Intel will be able to interact more efficiently and quickly, while Intel software gives users a smooth experience.

Speaking of competitors, chipmaker Qualcomm is spending $47 billion to acquire NXP Semiconductors, in large part to get more involved in the automotive market, where NXP is strong.

But Intel’s product plans are complete enough already for 5G and autonomous cars, Krzanich says, downplaying the need for any additional acquisitions. “We feel like…we’ve got the right products,” he says.

Other rivals that lack the breadth of products of Intel may need to acquire, Krzanich adds. And “as a result of that, I think consolidation in the industry will continue, but that’s an industry comment not necessarily an Intel comment,” he says. “We’re pretty comfortable with our road map.”

Not surprisingly, Intel is opposed to extending the patent licensing model Qualcomm has imposed on current smartphones into the 5G world.

Apple, which buys 4G modems for iPhones from both Intel and Qualcomm, sued Qualcomm last month over licensing fees it had to pay that were calculated based on the total cost of a device. Apple argues Qualcomm shouldn’t get paid more for an iPhone that happens to cost more because it has more storage, for example. The iPhone maker says royalties should be limited to a percentage of the cost of just the components relying on Qualcomm’s modem chips. But Qualcomm counters that its patented technologies add value to the entire device, well beyond simply the capabilities of the 4G modem chip.

“You should be paid for IP you provide, not the total IP in the system,” Krzanich says, taking Apple’s side without mentioning the iPhone maker by name. “When you think about an autonomous car, a modem is just one piece and there’s quite a bit of other engineering that goes on inside there.”