Loook announced in April 2016 that it was making “mixed reality” apps that blend 3D animations and the real world using Microsoft’s HoloLens glasses. And today, the Seattle-based holographic computing studio is showing off a project that it worked on with BGC Engineering.

The project focused on creating a geotechnical engineering visualization app for reclaiming old mines and restoring the environment around them. Such projects are the beginning of an effort to turn AR into a $83 billion market by 2021, according to tech advisor Digi-Capital.

Microsoft has released a $3,000 development version of HoloLens and a $5,000 commercial version. Those prices are expected to come down at some point. In the meantime, companies are figuring out ways to use HoloLens in enterprise applications.

Microsoft has just begun shipping HoloLens, an augmented reality headset with a wireless Windows 10 device that lets you to see virtual “holograms” in the 3D space around you, as a layer on top of the real world. This differs from virtual reality, which requires a special headset with goggles and replaces the real world. 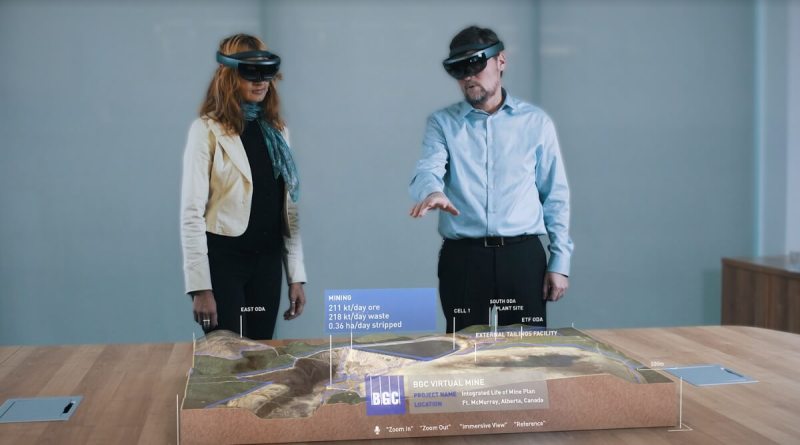 Above: Loook and BGC can visualize engineering landscapes with HoloLens.

Loook signed its first client back in June 2016. Loook has also created applications such as a 3D data visualization tool for KPMG, an overhead crane operator training simulation, and a computer vision object recognition R&D project for Vulcan.

Loook’s initial approach is to focus on AR projects for enterprises that want to create “meaningful applications,” said Sébastien Motte, cofounder of Loook, in an interview with VentureBeat. This application allows engineers to visualize the impact on the environment.

“Holographic 3D visualization is no longer just a fantastic notion, limited to the world of video games and futuristic movies,” Motte said. “By allowing people to interact with and control their experience, HoloLens generates a deeper understanding of 3D environments and their changes over time.”

From mine planning to debris flow modeling and augmented site inspections, the app helps BGC and its clients visualize a scene and solve engineering problems. It integrates data ranging from geological models to monitoring datasets.

Loook’s team, including cofounder John Howard, has years of experience working on HoloLens for Microsoft on projects including Mars OnSight with NASA and the JPL, as well as projects with Autodesk and Trimble. Its strategic partner is Asobo Studio, which has been developing on HoloLens for more than four years — longer than anybody else.

In one of the apps, Motte said that the company could connect up to 15 people in one HoloLens app.

“We want to make a positive impact on the world through connecting people and protecting the planet,” Motte said. “In this case, mining companies can do a better job maintaining the landscape.”

With BGC, Loook has created a proof-of-concept visualization that shows how to plan the closure of a mine. The holographic visualizations visible through the HoloLens can reduce client costs through increased efficiency by making it easier for stakeholders to see and understand difficult engineering concepts in 3D, facilitating confident decision making. You can basically walk the landscape in a virtual tour to reduce anxiety about what something might look like in the future — before moving tons of earth.