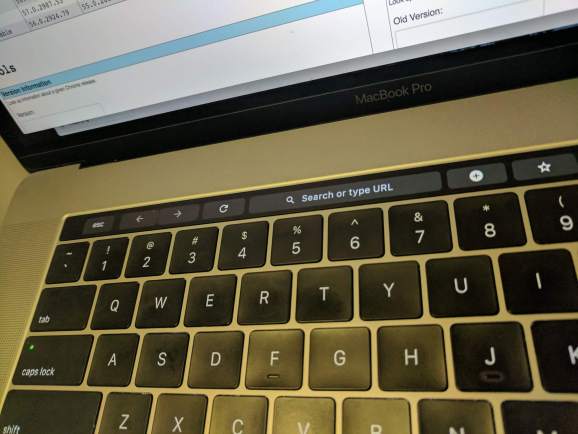 Google has included support for the Touch Bar display on Apple’s latest MacBook Pro laptops in the most recent Canary build of its Chrome browser.

The feature is live in version 58.0.3020.0 of the early version of the software, which came out today, as 9to5Mac reported. The feature should be part of the stable release of Chrome 58, which is due during the week of April 25, according to the Chromium website.

The implementation of the Touch Bar in Chrome is currently rudimentary and certainly not as impressive as it is in Apple’s own Safari browser. In this build you have back and forward buttons, a button that dynamically switches between refresh and stop, a wide button that moves the focus to the omnibar in order to search or enter a URL, a button for opening a new tab, and finally a button for adding a bookmark.

Google isn’t the first company to add Touch Bar support to its third-party browser for Mac. Opera added it in January. Other apps that support the MacBook Pro Touch Bar include 1Password, Reveal 7, Spotify, and Word.

If you’d like to try this initial support of the Touch Bar in Chrome Canary on your Mac but you don’t already have the browser installed, you can get it here.