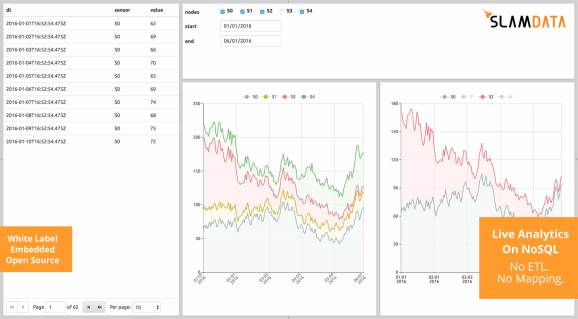 SlamData, which provides a business intelligence (BI) tool for enterprises, announced today a funding round of $6.7 million.

The Boulder, Colorado-based startup helps customers get more out of NoSQL databases like MongoDB, Couchbase, MarkLogic, and Hadoop. SlamData offers native analytics and reporting, which enables businesses to easily create reports, charts, and other types of visualizations for executive business decisions.

“What differentiates [SlamData] from existing tools like Tableau or a Power BI is that these tools were essentially built in the age of relational data, which is the way Oracle and those legacy databases store data,” Jeff Carr, chief executive and cofounder of SlamData, told VentureBeat in an exclusive interview. “At SlamData, we don’t have those limitations, so we can work natively with NoSQL databases, Hadoop, or even the cloud APIs.”

For now, SlamData’s main product is an open-source community edition that is free to download and use. Carr says that more than 7,000 businesses, including Bank of America, Cisco, IBM, Intel, and Verizon, use this free software. SlamData also offers a commercial edition with advanced features for authentication, authorization, and auditing.

“With this edition, you can securely publish reports, limit what users can do or see on a role-by-role basis, and have complete auditing of all interactions,” said Carr. This version is used by more than 50 customers, including the Department of Homeland Security,  Intermap, Hewlett Packard Enterprise, and Viptela. The company’s chief competitors are Qlik, MicroStrategy, and Tableau.

According to Carr, SlamData is poised to benefit from the fast-growing Internet of Things (IoT). “What’s driving the growth of these modern data structures are things like IoT, which uses a data model called JavaScript Object Notation (JSON) almost universally,” he said.

“IoT data is exploding and it doesn’t use a relational data model, so if you try to take a bunch of IoT data that you’ve generated from a device and store it as JSON and then access that with Tableau or Power BI, it just doesn’t work. Our solution works natively with those modern, more complicated data structures.”

The new money will be used to expand the management and the engineering teams and to further sales and marketing efforts. Founded in 2014, the startup currently has 15 employees.