Dungeons & Dragons is heading into virtual reality, and its first battle ground is going to be a chess board.

Wizards of the Coast and Experiment 7 announced Dungeon Chess today, which debuts sometime in 2017 (the press kit had said March 28, but the studio has since changed this) for the Oculus Rift for PCs and the Samsung Gear VR mobile headset. It takes classic monsters of the 42-year-old tabletop role-playing game and puts them on a chessboard, with animated combat when the pieces meet. The VR studio also said that this is the first project of this partnership, hinting at further VR games down the road. And this could help the burgeoning VR software market, which market researcher SuperData scaled back to a possible $14 billion in sales by 2020. Brands will help this forecast, and few are as big as D&D when it comes to fantasy gaming. 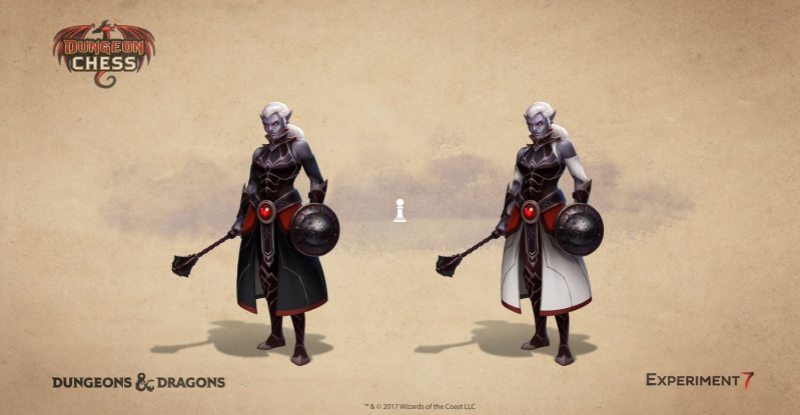 Above: Most drow are used to being pawns in the plans of nobles, so it's only fitting that they take the lowly piece's role.

Experiment 7 promises that Dungeon Chess will move “fire-breathing dragon queens, death-ray blasting beholder rooks, and other popular D&D creatures across the board as they engage in classic chess matches.” Its website shows pictures of a drow elf pawn in armor holding a mace, a beholder rook, a gold dragon rook, and a mind flayer bishop, and the studio says it plans to reveal more units on its social media channels leading up to launch.

Chess makes a good setting for a D&D skin, but why did Wizards of the Coast decide to go with the classic game for its first foray into VR?

“We chose Experiment 7 and their cool VR game room. They are a talented group of industry vets and big D&D fans. We have a long-term partnership in place which spans different genres and game types,” D&D director Nathan Stewart said in an email. “Chess is a game with tons of possibility in different visuals and animations, and we’ve always imagined a version that used iconic D&D monsters. Think of a beholder’s eye rays disintegrating a gold dragon, or a mind flayer latching onto a drow pawn and eating its brain. That’s hard to pass up, right?”

“What we’re making is a series of beautiful virtual reality environments where you gather around a Magic Table with your friends and play table-based games,” Experiment 7 creative director Geoffrey “GZ” Zatkin said. “Our goal is to create ‘better than life’ gaming experiences that encompasses some of the fantasies we’ve always had about what Game Night could be, and to make a place where you can reunite with your friends from around to world to play together. The Magic Table platform itself is our back-end technology that helps power our current and future games.

Experiment 7 debuted more than a year ago. Zatkin founded it with Demetri Detsaridis. It’s an independent shop and has accepted venture capital funding (Presence Capital, for example) along with backing from game publishers such as Gree and Colopl’s $50 million VR fund and angel investors.

Update, 6 p.m.: Experiment 7 clarified that it does have venture investment.

Update, 4:06 p.m. Pacific: Experiment 7 has changed the release date, and we’ve added comment from both the studio and D&D publisher Wizards of the Coast.