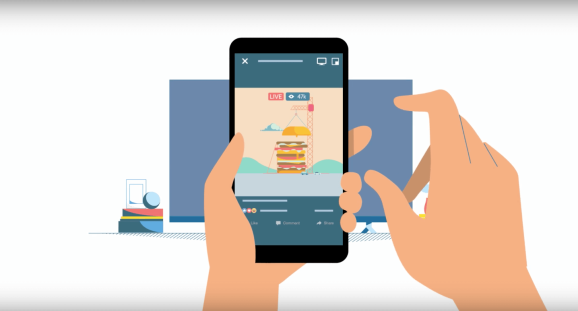 Facebook is done with testing Audience Network mid-roll video ads and is making it available to “eligible” publishers starting today through its Audience Network. What this means is that now when you watch videos on other websites or apps, you not only could see Facebook ads before it starts, but also midway through, all aimed at improving Facebook’s ad load problem while giving creators more ways to monetize their work.

Additionally, the social media company is also expanding testing around monetizing live video. More creators, including personalities and brands, will be able to include 20-second ad breaks (basically commercials) in their live broadcasts that reach 300 or more concurrent viewers. This not only applies to live, but also on-demand videos.

“Whether on Facebook or off, we’re committed to continuing to work with our partners to develop new monetization products and ad formats for digital video. It’s early days, but today’s updates are a step towards this goal,” explained Facebook’s vice president of partnerships Nick Grudin in a canned statement.

It shouldn’t be surprising to see more ads coming to video, especially based on the interest the company and its chief executive Mark Zuckerberg place on the medium. During Facebook’s fourth quarter earnings call earlier this month, Zuckerberg remarked that the company would be investing more in the space, including in original video content. The launch of additional advertising formats is all in preparation for that.

Previously, Audience Network ads were only seen beforehand (pre-roll) on other websites and apps, but when Facebook debuts original video content later this year, it’ll have the capabilities to insert additional commercials throughout the length of the video, making it more like the experience you have when watching TV — think of it as akin to when you catch up on a show on-demand using Comcast or Verizon.

And this could play a part in alleviating the ad load issue that Facebook’s chief financial officer Dave Wehner warned about. In July, he suggested that the total number of ads the company was able to show each user would be a “relative non-factor” in predicting the company’s future revenue growth a year from then. There wasn’t any more room for ads, in short. These mid-roll ads, along with the launch of a TV app for Apple TV, Amazon Fire TV, and Samsung smart TVs, could provide some remedy for and welcome news to advertisers.

But mid-roll ads are just the start of additional monetization options Facebook is working on. The company is also looking at monetizing livestreams by giving certain broadcasters the ability to insert commercial breaks. So if you have a compelling live video with 300 or more concurrent viewers and want to take a break, but don’t want to end the stream, there could be an option to insert an ad break. In doing so, viewers will see an in-stream ad of 20 seconds. Facebook plans to split the revenue with creators, reportedly a 45-55 split in favor of the latter.

Pages or profiles in the U.S. are eligible to use ad breaks in their live videos if they have more than 2,000 followers and have reached 300 or more concurrent viewers in a recent live video. Ad breaks can be used on any video with at least 300 viewers by tapping on a $ icon at the bottom of the Live composer window, but only after 4 minutes of broadcasting. Afterwards, additional ad breaks can be used for every 5 minutes livestreamed.

Facebook cautions that Pages and profiles that violate its intellectual property or community standards may not be eligible for ad breaks. The company also plans on expanding ad breaks to more countries “in the future.”

Those with on-demand videos won’t be left out because Facebook revealed it has begun testing ad breaks in this format as well. “A handful of partners” in the U.S. are participating in a beta program where ad breaks are inserted into uploaded or existing videos in their Facebook libraries. There’s no timeline for public rollout.

Updated as of 4:16 p.m. Pacific on Thursday: Clarified that the mid-roll video ads are with Facebook’s Audience Network.