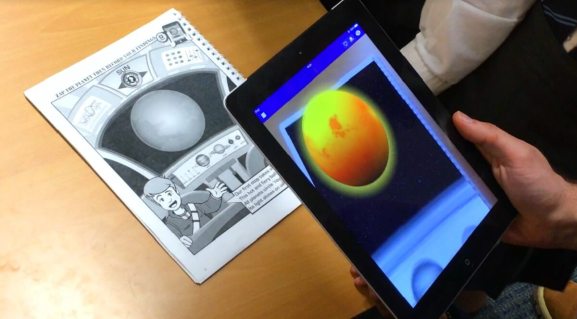 Zappar's tools can be used to create augmented reality apps.

Zappar has raised $3.75 million in funding for its augmented reality and virtual reality creative tools.

London investment house Hargreave Hale led the round, with participation from trade investors You & Mr Jones and China’s iDreamSky.

Zappar will use the funds to accelerate development of several new products, as well as fueling its international expansion. In particular, the company plans to increase development, global marketing, and support for its recently launched flagship product, ZapWorks — an AR/VR/MR creative suite that facilitates the process of creating interactive short-form content.

“This funding round is another great milestone for the business,” said Caspar Thykier, CEO of Zappar, in a statement. “Zappar’s mission is to democratize augmented reality. AR represents an exciting future for consumer engagement, connecting devices to the world around us. With this round, our established institutional and trade investors lend further credence to this future as we continue toward AR delivering a digital discovery channel through mobile devices and head-mounted displays. This investment will help us further develop ZapWorks — our market-leading AR, VR, and now Mixed Reality content-creation service that will power the future of consumer interaction and engagement for the next generation of digital developers.”

Zappar will also be expanding its team and adding new roles at the company. Working with iDreamSky also opens up opportunities for Zappar in the China market.

“We’re at a unique moment in time as AR, VR, and MR content and technology moves into the mainstream,” said Oliver Bedford, fund manager at Hargreave Hale, in a statement. “There are a number of players entering this space. Zappar are a clear front-runner, grounded in an established, effective, robust, and highly scalable content creation technology that caters to all markets and developer needs.”

To date, Zappar has worked with more than 200 partners from the retail, television, film, and packaged goods industries to create interactive, snackable AR campaigns. The company has thousands of users in 199 countries on the ZapWorks platform.

“Zappar is a best-in-class business that empowers businesses and creatives to build best-in-class augmented reality experiences,” said George Prest, partner at You & Mr Jones — which is also an investor in Niantic, creators of Pokémon Go — in a statement. “Since launching ZapWorks earlier this year, the platform’s ease of use, breadth of tools, and affordable cost structure have resonated very strongly with the market, resulting in clear belief from us in their business potential. Zappar has what it takes to truly democratize AR creation, and we’re looking forward to the company’s successes.”