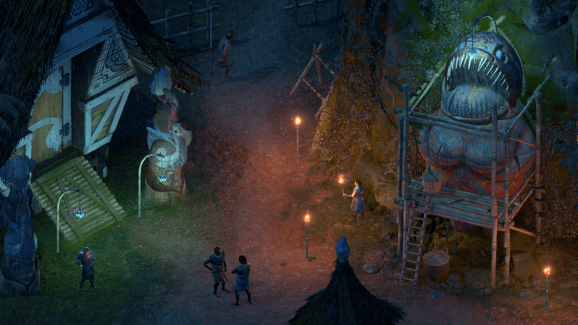 That statue looks like it was sculpted right out of Lovecraft.

The Fig tree is bearing some big fruit.

Today is Pillars of Eternity II: Deadfire‘s last day of crowdfunding, and it has passed some big milestones. Fig announced that the PC, Mac, and Linux role-playing game is the most successful campaign ever for the crowdfunding site, right now achieving more than $4.2 million with about five hours left to go. Fig also noted to GamesBeat that this is the first crowdfunded game to pass $4 million since 2015 — joining the likes of Shenmue 3 ($6.3 million) and Bloodstained: Ritual of the Night ($5.5 million).

Both of those games were on Fig competitor Kickstarter. Unlike Kickstarter, Fig allows for equity backing, which could give people a share in a game’s profits. Before Pillars of Eternity II, Psychonauts 2 was Fig’s most successful crowdfunding campaign. It raised more than $3.8 million.

The original Pillars of Eternity raised $3,986,929 on Kickstarter in 2012, making it the No. 4 game in Kickstarter history. Since then, Obsidian chief executive officer Feargus Urquhart helped start Fig. This is the first Obsidian project to appear on Fig.

Obsidian is famous for its RPGs, which includes hits like Star Wars: Knights of the Old Republic 2, Fallout: New Vegas, and South Park: The Stick of Truth.